The Paris Pantheon, modeled on its counterpart in Rome, is in the Latin District of Paris. Originally built as a church, it is also the resting place of Marie Curie, Voltaire, Rousseau, Emile Zola, and Victor Hugo. It is looking clean and impressive after undergoing extensive restoration a few years ago. Louis XV commissioned the Paris Pantheon to express his gratitude to God after he recovered from an illness. Construction began in 1757 and was completed in 1791. For you architecture buffs, it uses Gothic principles of light but combines them with classical design. It’s known as the first Neoclassical work of art. The first experiment with Foucault’s pendulum was held at the Pantheon in 1851. You can still see the pendulum today. I’ve seen these pendulums at other museums; it’s amazing to see the original here.

You’ll want to remember to look up. We had the wonderful gift of finding a hotel right across the street from the Pantheon. I was blown away by the view from our room. Sunrise on the stately Paris Pantheon – what a way to begin a day in Paris!

If you visit, be sure to turn around and admire the view from the steps in front of the Pantheon.

At night, from here you can enjoy the light show on the hour as the Eiffel Tower lights sparkle. It’s pure lovely Paris as seen from the Pantheon.

How about you? Have you visited the Paris Pantheon or the Pantheon in Rome? 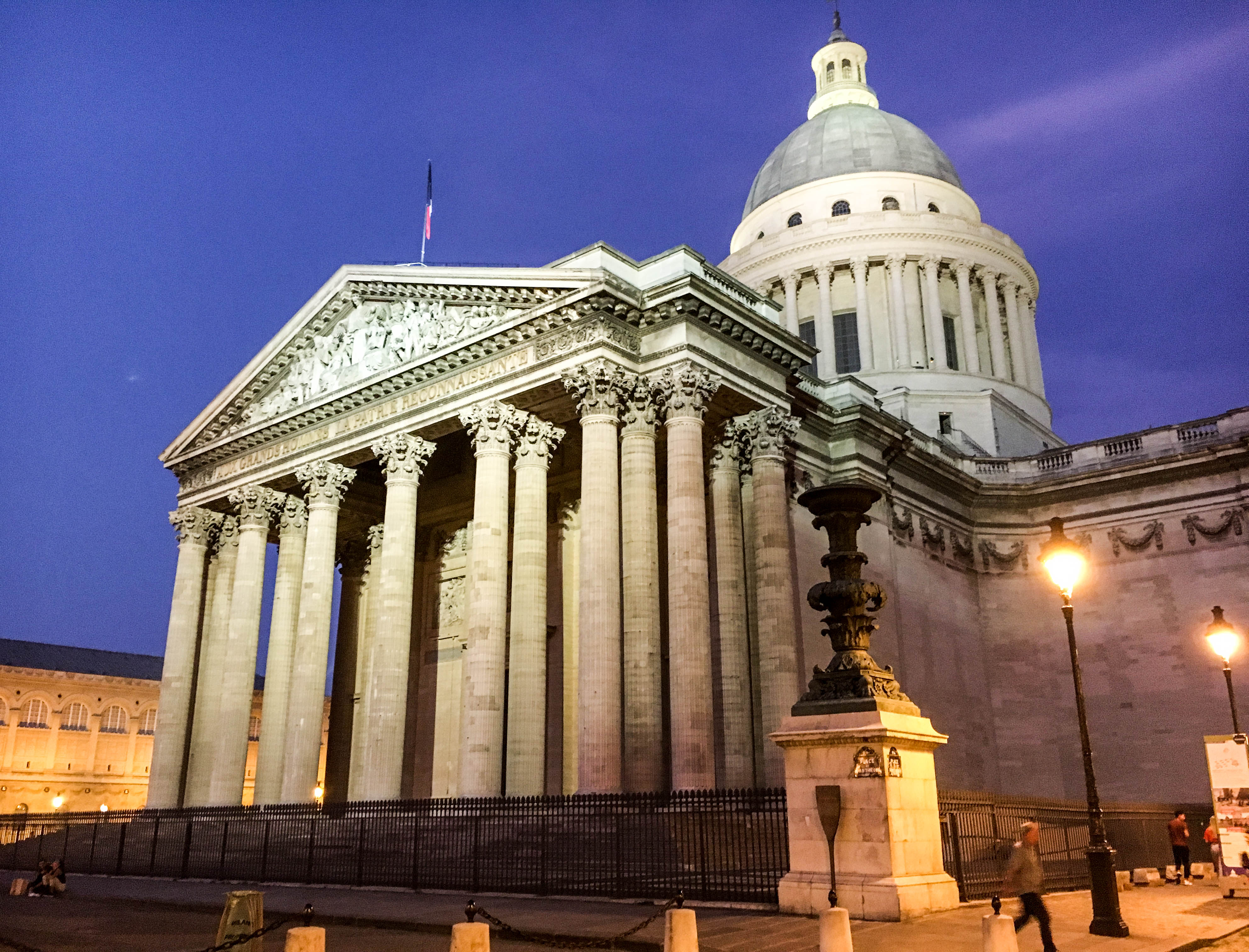 A Morning in Bayeux

What a magnificent building. Paris is full of amazing architecture and your images show that well. Thank you for linking up with “Through My Lens”

Just amazing! I cannot get over what you’ve seen on your travels!

Am making a list, Sharon ,of all the things in Paris we need to see whenever we’ll visit our son in the Hague (only a five hour trip to drive to Paris) )!Love that you took these ceiling views! Awesome art! Admire Louis XV’s wish to give thanks to God and building the Pantheon, but smiling about some of the people buried there. I don’t know if some of these I’ll see in heaven, but then, I could be surprised:) Many thanks for sharing this beauty with All Seasons, ad have a great week!

A beautiful building and I enjoyed all the info you provided

What a striking and beautiful building – breathtaking, really.
Thanks for linking up at https://image-in-ing.blogspot.com/2017/10/at-this-bridge.html

A ShutterBug Explores aka (A Creative Harbor)

I love these stately buildings. If walls can talk, right?

Wow, the building is in excellent condition. I wish I had visited it when I was in Paris. I guess too many things to see and too little time.

What a stunning sunrise view – it’s such a long time since I’ve actually been inside (although I always enjoy spotting the statues) that I’d forgotten just how like its counterpart in Rome it is. Thanks for linking up with #citytripping

what a magnificent impressive building and such great photos! I’ve been to Paris a few times, but was not aware of this..

Gorgeous photos! I’ve visited Paris three times, and somehow have never made it inside this amazing building! I always seem to arrive as it’s closing or it’s under renovation… Thank you for sharing these lovely photos! #citytripping

Heading to Paris at the end of the month. I have been many times, but have never visited the Pantheon there. Will add to my list now.

I was in Paris a few months ago and our hotel was on a street just below the Pantheon. It served as a beacon to guide us back each evening. So beautiful.
Amalia
xo

Such an incredible place. All the details and symmetry are awe inspiring. It’s been ages since I went to the Pantheon – a great reminder to go back. Thanks for sharing on #FarawayFiles

Sharon, I have not visited the Pantheon! Not sure if I was aware of its existence. Now, I have something else to add to my list of things to see in Paris (my first visit was short). It looks a bit like a capitol building. Don’t you think? #TPThursday

I didn’t realize that Paris also had a Pantheon! It’s so beautiful and will definitely go on my itinerary for a next visit! Thanks for sharing on #TheWeeklyPostcard!

I’ve been to both the Pantheons. The Paris one was still under renovation when we visited 4 years ago. From your photos, it looks like they did a wonderful job. I was quite disappointed that the Foucault’s pendulum had been taken down during the restoration as that we one of the things I was looking forward to seeing. Your hotel had a fantastic view that really reminds you where you are each morning.

It’s been many years since I visited Paris, but this is the first time I’m hearing about the Pantheon! It is indeed stately and calls to mind that bygone era. Loving your Paris series as I’m learning so much about it!

Such a beautiful building! We have yet to actually visit the Paris Parthenon up close. We’ve only passed by, always on our way to somewhere or other. Next trip, for sure! Meanwhile, we have your excellent photos. Thanks for sharing on #TheWeeklyPostcard.

The architecture of this place is so remarkable and outstanding, Sharon! Is one day enough to explore it?

Lovely photos Sharon… and what an amazing view from your apartment window! I took my boys to visit the Pantheon last year, and we loved the architecture. You did a fabulous job capturing its beauty and geometry. Thank you for your visit to Paris and my blog 🙂 xo

You know, I’m not at all sure if I have been into the Pantheon! How bad is that? I know for sure that I haven’t been as an adult so even if I went as a child it’s high time I went again! Your photos are inspirational. Thanks for linking to #AllAboutFrance

Wow what a great position your hotel was in. Loved your tip about seeing the lights of the tower from the Pantheon steps. I must admit I didn’t know that Paris had one. 🙂 It looks amazing.

[…] you wander around the Latin Quarter for long, you are sure to find the Pantheon. This large building, originally a church, it is now a tribute to the history of Paris and the […]