Reasons to Visit the Eiffel Tower 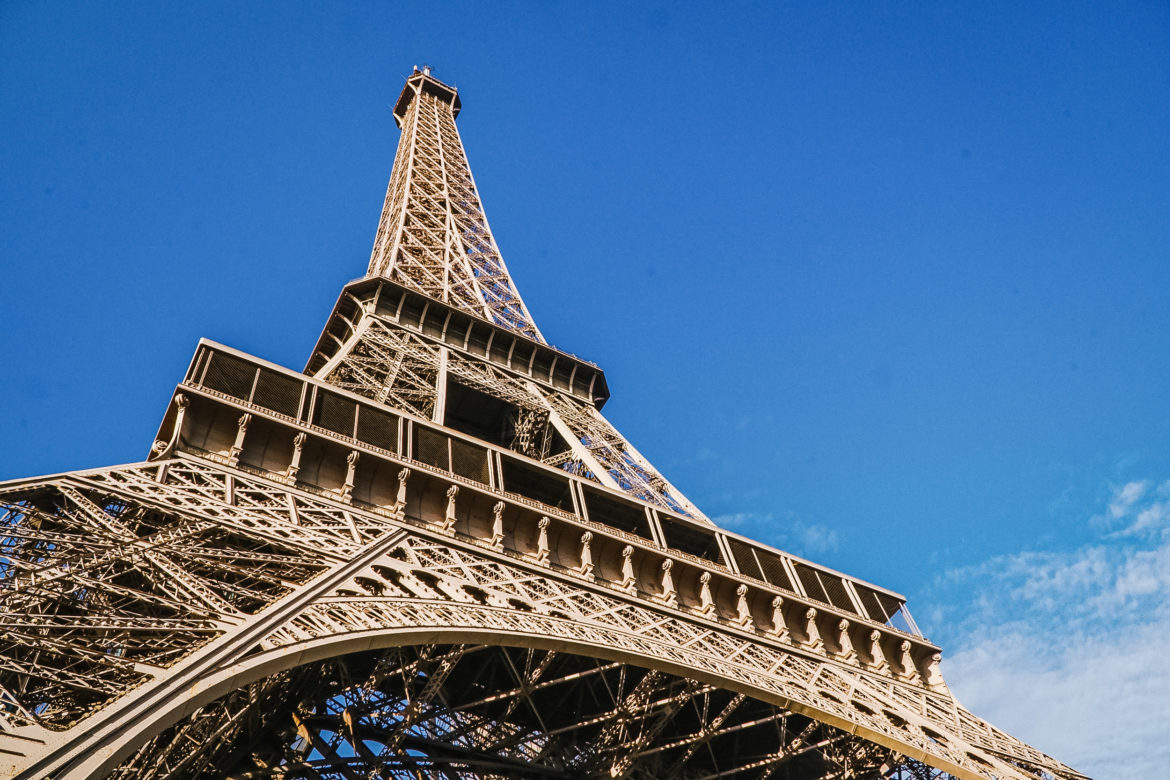 The Eiffel Tower is the iconic symbol of Paris, and you’ve likely heard about and seen images of it all your life. The Eiffel Tower recently reached a milestone, celebrating its 130th anniversary! Defying the critics and naysayers, it still stands tall in spite of starting life as a temporary fixture so many years ago. Dominating the skyline of central Paris, the Eiffel Tower is now classified as a historic monument. Whether you’re relaxing on the lawn and looking up at it or looking at the world from inside the tower, it’s quite impressive. 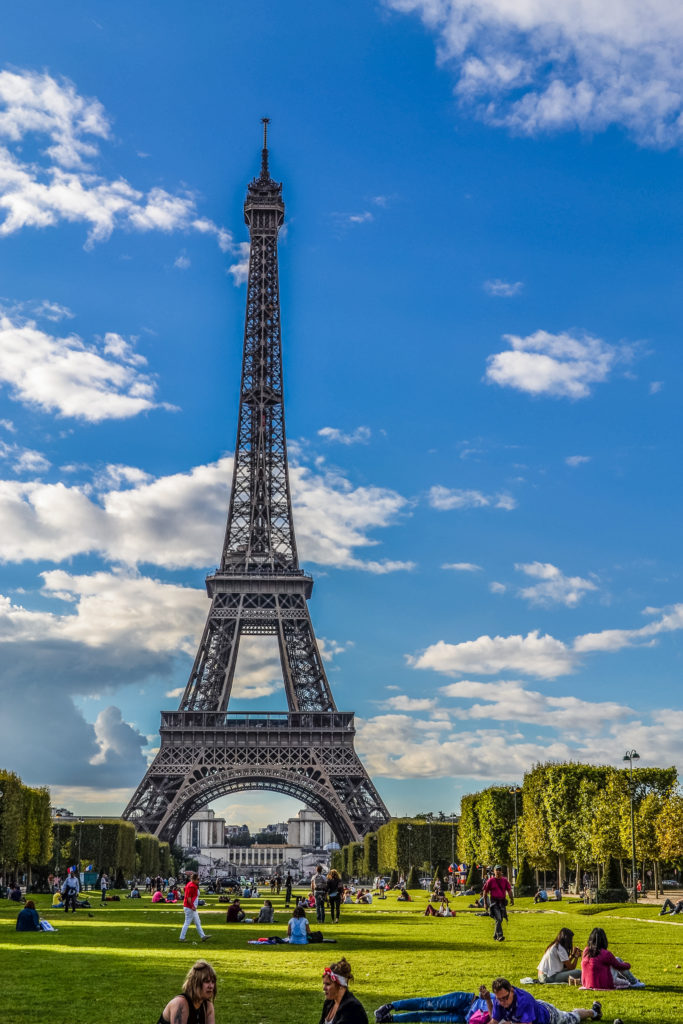 You can see the Eiffel Tower from many vantage points on both sides of the Seine River. On my first spotting of the soaring tower when I arrive in the city, I always catch my breath and smile. Ah, Paris!

Here are a few awesome reasons to visit and some fascinating things to look for when you go to the Eiffel Tower.

The Tower was built for the Exposition of 1889, which marked the 100th anniversary of the French Revolution. Taking just two years and two months to construct, the Eiffel Tower is called by the official site “a veritable technical feat.”

The design is complicated and intricate, far more than it appears from a distance. The metal is held together with more than 2 million rivets. These metal pieces, each so small, work together to hold up the massive structure.

You Can Marvel That It’s Still Standing

The plan was to destroy the Eiffel Tower 20 years after the Exposition. But creator Gustave Eiffel figured out a way to save his pet project. He declared a purpose for the tower based on science. It could serve as a place for astronomical and weather observations. It could serve as a telegraph communications point. It’s perfect for studies of the wind. Mr. Eiffel put it this way: “It will be for everyone an observatory and a laboratory the likes of which has never before been available to science.”

If you look on each leg of the tower today, you find the names of 72 scientists honored in their field.

The Eiffel Tower served as a wireless transmitter site during World War I and later aided in radio and television broadcasting.

And so, its contributions to science have insured the survival of the tower that was not meant to last.

It’s Bigger in Person Than in Photos

The Eiffel Tower is gigantic. You hear that it is 1,000 feet high and the statistic flits right out of your head. But when you stand dwarfed underneath it, you experience how tall that really is!

The four substantial legs are amazing structures that hold up all the metal. A park and pond fit under one of the legs.

You’ll Want to Go Up Inside the Eiffel Tower

You can take an elevator or climb (many!) stairs up into the tower. About seven million visitors a year do just that. I knew that I wanted to go up in the structure before we flew to Paris. Friends of mine wanted to simply gaze at the tower from the ground. If you know you want to go up, you can reserve tickets for the elevator and save standing in long lines.

Learn more about climbing up the 700 stairs!

Enjoy Views All Around

You can climb to three levels of the Tower, and at any of these you can take in the view. The Tower affords a 360-degree panorama of Paris. The peaceful Seine flows below, with what looks like toy boats floating along.

The streets of Paris have an interesting layout. And the gold dome that sparkles in the sunlight is the Invalides, where Emperor Napoleon I rests in his tomb.

Fun Fact: What Color Is the Eiffel Tower?

The Eiffel Tower is currently three shades of brown. Every seven years, 60 tons of paint are needed to repaint the Iron Lady. So far, the tower has been pained 18 times. When presented to Paris to commemorate the French Revolution, the tower was painted red. As much as I love it today, I think a return to the original red would make it really “pop” in the sky.

The Eiffel Tower Lights Up the Night

Seeing the immense tower lit up against the darkness is an experience you will remember always. It takes 20,000 light bulbs to illuminate the Eiffel Tower, and once an hour on the hour for five enchanting minutes they sparkle. You can thank 25 mountain climbers for placing these lights on the tower. And it took them five months.

The magnificence, the history, and the universal recognition of the Eiffel Tower combine to make it a one-of-a-kind marvel.  I recommend that you travel up in it and take in the vistas of Paris. It’s an experience you’ll always remember and treasure – and likely want to repeat.

Are you heading to Paris for the first time? Read these tips to help you plan your trip!

The official Eiffel Tower website gives all the information you need to buy your tickets online before your visit. You can also read more about the history of the tower. You can purchase a special edition book published for the 130th anniversary of the tower. And if you are a die-hard Eiffel Tower fan, you can buy one of the original rivets from 1889 for a mere 525 euro!

PLANNING TO GO TO PARIS? THESE GUIDEBOOKS CAN OFFER LOTS OF HELP!

FOR MORE OF PARIS, HEAD TO THESE POSTS!

A Walk in the Latin Quarter

PIN IT FOR TRAVEL PLANNING!!!

Such a magical and stunning place to visit!

I had no idea what color the Eiffel Tower really was, that’s such an interesting fact that it takes 60 tons of paint! Great post thanks for all the details!

I did so love you photos of the Eiffel Tower! I enjoyed the photos all the more because when I was there it was in March and there were no leaves on the trees and the grass was not green! It was just a beautiful, breezy day! Thank you!

One of my favorite places to enjoy the eiffel tower is from Cafe D’lhomme! I’ll usually get a coffee and watch it from there, especially when it’s dark! Lovely post!!

Gorgeous photos as always! I loved visiting the Eiffel Tower with my mother 15 years ago and can’t wait to bring the kids. I’ll have to share your pics and facts until we can go!

Great post with so much detail! I can’t wait to go back and visit the Eiffel Tower ; )

I’ve been to the Eiffel Tower twice and I’d go again! I’ve loved it each time…it’s such a beauty! But I have to say seeing it sparkle at night is a special treat! Great tips!

This is where you and I differ, Sharon! True, when you have never seen it, it’s humongous. I was impressed for a few minutes. Love your second angle of the tower. and thank you for making this the focus for this week at All Seasons:)
But then the waiting came for hubs and son to come back from their hike up and down, and daughter and I had to defend our backpacks and keep some super intrusive people at a distance from our treats. They were well dressed, so they were not poor or homeless. As years pass, it increases the iconic quality with time, but Paris has to much to see, that I could easily delete this tower from my next trip. Have a fun week!

Stunning photos! These remind me of my trip to Paris & the Eiffel Tower.

Fascinating details about the tower

Beautiful photos! We visited the Eiffel Tower when we were in Paris but we didn’t allow nearly enough time. We didn’t go up in the tower to look around. That gives us another good reason to go back!

The Eiffel Tower is my favorite architectural wonder of them all. I was so thrilled to get to see it; from just about everywhere in the city! Sadly, I never made it up into it though.

The Eiffel Tower is amazing in person! There’s nothing like it. You describe it perfectly

Wonderful pictures of the Eiffel Tower from some very interesting angles. Well done!

I’ve been to and definitely love it just as you said, the view from the top is stunning!!!
But I never search for its history and many stories, it’s a good reading for me 😀

Lovely photos Sharon and great information! I never knew that the Eiffel Tower served any purpose other than as a structure that you can ascend to see a great view of Paris. Can’t believe I wasn’t aware of the fact that The Eiffel Tower was a wireless transmitter during WWI – makes perfect sense now that I think about it! Goes to show that even the most famous landmarks have more to them than is commonly known. Thanks for the history lesson 🙂

I love your photos of the Eiffel Tower and commends you for providing such detailed facts and tips for those who’d like to visit!

Oh this reminds me of our trip to Paris! We took a picnic lunch right on those grassy fields in front of the Eiffel Tower, too! Paris is a great place to visit.

Such interesting facts about the Iron Lady! I always had the impression that it was red in colour; I guess that’s how it’s usually portrayed in media. Would love to see it in real life.

Ahhhh, the Eiffel Tower. Such a symbol of Paris. What fantastic photos you got! Years ago, I took my kids and we actually went underneath it. That was pretty cool!

No matter how many times we’ve visited Paris, every time we are there, the view of the Eiffel Tower never ceases to amaze us – it’s just so iconic.We love staying in 7th arr during our trips just so we can be in its vicinity and head out for a leisurely stroll along nearby Rue Cler. This was a great read and I enjoyed getting to know more about Eiffel – it certainly is a design wonder.

Couldn’t agree with you more! I’ve visited the Eiffel Tower a few times and it never gets old to me. One thing I do need to check off my bucket list is dining on the Eiffel Tower. They’ve got 2 restaurants located within the tower and I must try both of them!

The Eiffel Tower truly is a magnificent work of art and engineering! I love that Mr. Eiffel was clever enough to promote the tower’s use beyond it’s original use at the Exhibition–and I’m so glad. As one who loves art and architecture, panoramic views, and night skylines, it’s one of the many things I look forward to when visiting Paris. Thanks for sharing these interesting facts and tips about this historic monument. I’d love to see it painted red again, too!

The Eiffel Tower is seriously magical and a must-see for anyone visiting Paris!