The Reichstag in Berlin is a fascinating pairing of the old and the modern, with layers of history, much like the city itself.

Completed in 1894, it housed the government for decades. In 1933, a famous fire destroyed part of the building shortly after Hitler became Chancellor. He blamed others for the fire and closed the building, insisting this entitled him to grab more power for himself. Perhaps he actually engineered the fire? No one knows . . .

When Berlin was liberated in 1945, Russian troops rushed into the Reichstag, as it symbolized Germany. The building, damaged from WWII, wasn’t repaired by the Soviet occupiers. It wasn’t until after the fall of the Wall and the Communists left the city that the new, unified German government moved into the Reichstag and the interior of the building was modernized.

Our guide, Roland, greeted us in the entry way and off we went on a tour of this heart of Berlin.

As soon as you enter, you notice the design of gleaming steel, glass, and light-colored stone.

My favorite room is the library, with its striking red sofas and walls full of books. The abstract artwork depicts the history of Germany. Can you find the yellow star worn by Jews during the Nazi era here?

The view from the deck outside the library is of the River Spree. The seven white crosses are a memorial to unlucky Germans who thought that the river marked the line of the Berlin Wall here. East German soldiers knew the river here was actually in East Germany. So they shot those misguided seven. Notice there is a blank cross, too. We saw several unfinished types of these memorials in Berlin. Apparently so many people died trying to cross from East to West that names of the missing are still being added.

Next we took a stairway to the Archive of German Members of Parliament. Every member of parliament who has ever worked here (up to 1999, when this was designed) has a memorial on the walls. Hitler had several members arrested (those who didn’t support him), and they didn’t survive. Their names are here, too.

The updating of the Reichstag didn’t destroy all evidence of its past. Here are sections of wall with graffiti written by the Russian soldiers, preserved as a historic legacy.

On to the parliament meeting room. The floor of the parliament boasts about 600 blue chairs and a huge Bundestag eagle presides over the room. If you look up, you’re looking up into the glass dome (more on that later).

Our guide Roland lived in Berlin during the 28 years of the Berlin Wall, and he’s lived here in the 28 years since the Wall fell. As you can imagine, his commentary and answers to our questions were riveting.

The best comes last – the glass dome! Visible from far away in the city, the dome is a marvel of architecture and efficiency. Inside, as you wind up the circular structure, the views of Berlin are stunning. The lower end opens into parliament (no secrets allowed!) and the top end is open to the sky.

The audio guide is free and is really fun because it operates with GPS. So as you wind up and down the ramps, you hear about what you are looking at. You look down at the iconic Brandenburg gate from here!

Be sure to reserve your tour at least a month in advance. You can apply on the website for the date and time you want to go. Then wait to get an email approving your application. Security is tight, as you can imagine. No photos are allowed in the building where you check in (ask me how I know!), but once you’re inside the Reichstag, you can take all the pictures you want.

The tour is free, and the audio guide is included.

For more information, this publication by the German government gives lots of details about the Reichstag.

If you’re in the Berlin area, do yourself a favor and tour the Reichstag! 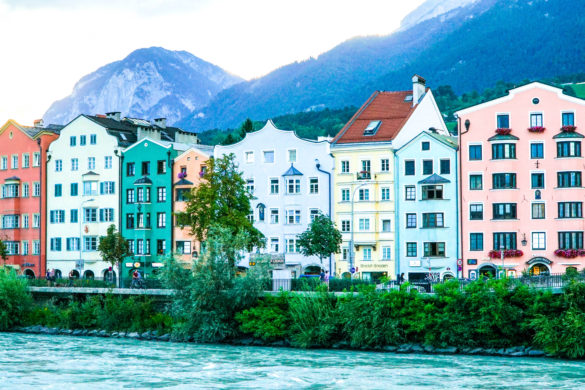 Hubby lived and worked in Berlin for 3 years, and because we got married the 3rd year together with me, when checkpoint Charlie was still in use. Despite the continuous emotional upheaval of people from East-Germany trying to escape to the West, Berlin is a city one never forgets with many beautiful places (and much art!). Berliners as very proud of their city:) Thanks for sharing it with All Seasons, Sharon. Have a grand week!

Wow!!!! That is such an amazing building!

I thought I recognized where you were from the thumbnail! We were there 2 years ago and had a superb breakfast in the restaurant!

It many years ago, I was there in Berlin… a great Post!
Heidrun XO

What an architecturally stunning building! And all that history – amazing! I’m yet to visit Berlin but will be adding this onto my bucket list. Thanks for linking up with #MondayEscapes

Wow – this was fascinating! So glad I was able to tour virtually with you.
Thanks for joining us at https://image-in-ing.blogspot.com/2017/10/beauty-on-wing.html

I loved Berlin – lovely photos. I didn’t notice the memorial on the river. Nice pics

Wow, what a post. I had no idea that the building had been restored. German citizens should be proud of it and I have no item added to my bucket list.

So very interesting! This would be a ‘must visit’ when in the area!

Having a guide definitely enriches the experience. A must see.

I’ve just recently been to Berlin too but didn’t have enough time to take a tour through the Reichstag. Definitely need to come back for that! #citytripping

What a fascinating tour. So much detail and amazing to hear it straight from someone who lived while the wall was in place. It’s such recent history. The crosses bring home the brutality. The dome part is something else. Absolutely top of the list when we revisit Berlin. Thanks for linking #citytripping

What a fascinating tour! Roland sounds very knowledgable which always makes a huge difference at a place like this. Thanks for linking to #MondayEscapes

I didn’t have time to tour the Reichstag when I went to Berlin, but now I’m wishing I did, it sounds like a fascinating way to learn about the history of the city. Next time I visit I won’t miss it! #citytripping

Wonderful post! So much history and I love the architecture. How great that the audio guide knew where you were, I wish that were the case everywhere! #citytripping

Such an interesting tour. I went to the Reichstag on a college trip when I was 16 and remember almost nothing (distracted by teen related matters no doubt). I’d love to go there again.

Your photography and presentation in your posts is so professional. I love exploring with you.

Wow, that’s absolutely spectacular! Definitely adding this to my list of places to visit in Berlin. Who would have thought that the interior of a dull-looking building is entirely different?! 🙂 #citytripping

Beautiful photos! It sounds like the tour was well worth joining, you got to learn so much about the history behind the Reichstag. I’m sure Roland would have been an interesting person to hear speak based on all he must have experienced!

What an interesting building with a mixture of modern and historical. #weekendwanderlust

I saw the Reichstag from afar when I visited Berlin – I knew about the fire and the Night of the Long Knives, etc., but had no idea that there was so much to see inside. Sounds like a very worthwhile tour, although it does take some planning in advance! This is definitely on my list for next time.

I have been busy the building , but never in! Thank you for the tour.

I’ve been a hundred times in Berlin, but never did a tour through the Reichstag. It’s now on my to do list when we’re there again forChristmas.

I only saw the building from the outside as I didn’t have time to tour it (and do everything else in Berlin). The modernization is very stylish and contemporary.

A modern Parliament for a modern city. I love this building. Thanks for sharing on #FarawayFiles

What an amazing place! There’s so much to learn and to see all in one place.

I feel like this is a place where a guide is needed. If I visit, I would want to absorb as much as possible of the history and events that happened there. It is great to know about the free tour you can reserve (that is awesome advice). On a related note, a few hours before reading your post, I discovered we have a National Museum of World War II (in New Orleans). They offer tours of Germany and Poland and visit the Reichstag. But, given the prices, it is more convenient to do your own tour. #WeekendWanderlust

What a fascinating tour, when Imwas last in Berlin the Reichstag was still being restored, time to revisit I think #CityTripping

[…] Touring the Reichstag – Exploring Our World […]

I was in Berlin last month. The Reichstag will definitely be a priority on my next trip. We only had six hours to explore the city.

This has got to be one of the best free tour values around! The architecture alone is worth touring, but all of the history is truly priceless. We love places that make history so accessible and relevant. We have not been to Berlin, but a visit to the Reichstag is a must when we get there. Thanks for sharing on #TheWeeklyPostcard!

[…] Britain has a unique link with Germany. Both country’s parliament buildings pay homage to their past, but Exploring Our World shows how Germany embraces today and the future in Touring the Reichstag in Berlin. […]

[…] Claire loved drooling over the stunning architecture of the Reichstag in this post by Sharon. She is yet to visit Berlin but will be adding this onto her bucket […]

Birgit | Groove is in the Heart at

Love your pics. They are stunning. Especially the first one! When I visited Berlin a few years ago, the Reichstag’s queue was just too long. Now I’m really sorry that I didn’t go. Thanks for sharing your wonderful experience.

Relaxing in the Tiergarten in Berlin | Exploring Our World at

[…] the street also are the Brandenburg Gate, the Memorial to the Murdered Jews of Europe, and the Reichstag. So we criss-crossed the Tiergarten often during our days in Berlin as we walked from place to […]

Thanks, Sharon. Looks interesting. Your photos are very good quality.