Innsbruck is a gem in the west of Austria that is often overlooked by travelers. It’s definitely worth a visit, though, for many reasons. And not the least is the beauty of this little city that nestles peacefully at the foot of the alps.

The River Inn flows through Innsbruck, hence the name. (The River Inn is not a hotel, as I briefly thought – ha ha!). Here’s the river, the pastel buildings lining the banks, and the alps – not in the distance but right up close.

The architecture is described as Imperial and gothic with more modern elements. The Eastern influence is apparent in the domes dotting the skyline. 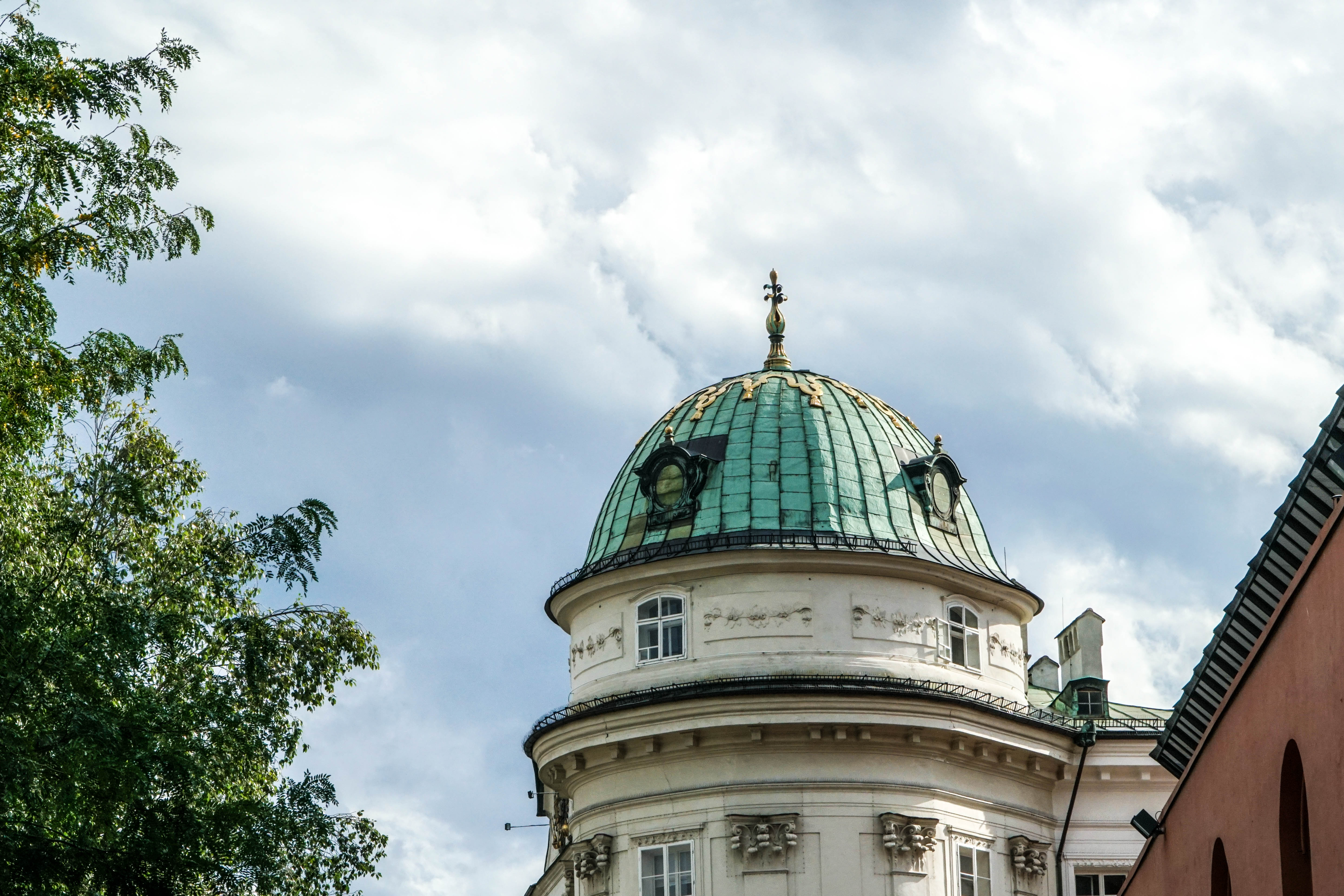 People tend to flock to Salzburg and Vienna in Austria, but far fewer travelers make their way to Innsbruck. We trained there from Switzerland in a last-minute change of plans because the Swiss Alps were expecting a big storm and our hiking plans had to be canceled. Innsbruck has inside activities (museums and a castle), so we figured we could weather the storm there. As it turned out, we loved Innsbruck and the rain here held off until we left. We stayed in a hotel that first opened its doors in the 1300s. This alone was worth the trip!

Innsbruck was home to Archduke Ferdinand in the 10th century. A tour of his castle is coming up in a future post. Maximilian I also reigned here in the 15th century. Innsbruck’s claim to fame in recent years is as host of the 1976 Winter Olympics. You can tour a ski run here! More on that coming up, too.

For now, I want to introduce you to the lovely old town along the river.

One easy sight to find is the Golden Roof, the most famous landmark of Innsbruck. It boasts more than 2,000 copper tiles and was added by Maximillian sometime around 1500. The square under the roof was once the scene of public burnings, but today it’s the scene of tourists enjoying their day. Of course, tiles are stolen from time to time, then recovered.

The food was fantastic. One cafe featured open-faced grilled cheese sandwiches, a real treat. And the gelato is SO good.

Our days in Innsbruck last fall were warm and fine for strolling, even as the sun set. And then we enjoyed dinner in a sidewalk café, taking in all the ambience of this lovely place.

What Makes a Cable Car Go? 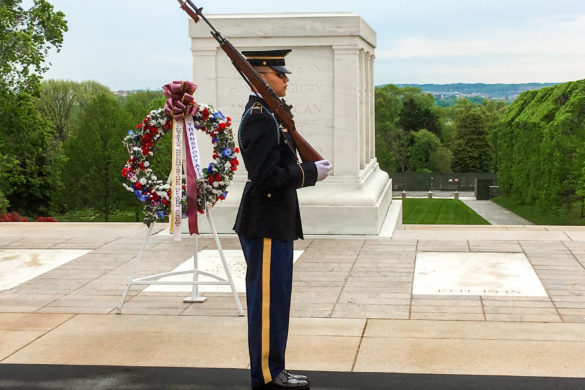 Wow! Wow! Wow!! The ornate details, the colors, the surroundings!

Thank you for the lovely photos of Innsbruck. Spent some time there more than 50 years ago and had a great time. Your photos bring back pleasant memories.

That loggia is beautiful.

Like your photography Sharon. A lovely commentary too. Unfortunately Innsbruck is one of those places that I will probably never visit – just too many on my bucket list.

I loved the tour and all the exquisite details of Innsbruck. Thanks so much for sharing.

Imposing and lovely! Quite regal.
Thanks for sharing at https://image-in-ing.blogspot.com/2018/02/more-from-nasher-art-museum.html

Indeed she is lovely and you photos are awesome!! Thank you! Have a wonderful week!

I am verily impressed that the very old buildings look so modern or maybe more they were built recently. That’s what quality and craftsmanship construction gives you.

what a lovely town. love the pastel colored buildings and they themselves are lovely.

I would LOVE to see Innsbruck! Your photos are amazing! What a beautiful city! And so much history…yep, it would definitely be on my itinerary!

Lovely, I agree! We have been there many times as we have some good friends who live just outside the city. We light to go to the top of North Kettern a mountain there and eat lunch looking out over the valley.

Perfect timing for this feature in time for the Olympics. Charming town.

You are right (again!) have been to Salsburg, Vienna, and a small village where we had our 2 vacations, but not to Innsbruck! Beautiful and lovely details, Sharon! You are widening my horizon and that of All Seasons – thank you!

I’m pretty sure we used to have a jigsaw puzzle with that exact tower and the mountains in the background!
Ironic you wrote this post in the midst of the Olympics – I think the 1976 Olympics are the first ones I really remember!

I visited the city many years ago and can barely remember details about it. One thing I know is that I love Austria so I would have no problems going back to Inssbruck. I would love to use the city as a base to explore the area.

You truly captured the beauty of Innsbruck! I’d really love to visit again when the weather is nice! It’s not far from us so it’s totally doable! May have to visit the castle you told me about too! #FarawayFiles

Innsbruck is definitely a stunner! I love your photos! It’s one of the most beautiful airports to land in, and although we visited in the winter to ski, it looks like the summer is just as good a time to visit! #FarawayFiles

Oh, how lovely!! Innsbruck has been on my list for a bit. Can’t wait to visit someday!!
#WeekendWanderlust

I had visited Salzburg in the fall and loved it. Innsbruck is a must see. #TheWeeklyPostcard

These photos are beautiful and I would LOVE to see this architecture in person! Innsbruck is definitely on my list. 🙂 #farawayfiles

Beautiful! I never would have expected all those pastels in Innsbruck. #FarawayFiles

I was in Innsbruck a few years ago and completely agree – it’s a fantastic place to visit. I love that the mountains are RIGHT there.
#TheWeeklyPostcard

What a gorgeous place, thank you for the introduction! I love the architecture and the color of the buildings. Seems like the perfect spot for a romantic weekend.

We are headed to western Austria in the fall and had looked at visiting Innsbruck. Now I know that it’s a definite must. Beautiful photos of a beautiful city.

I’m definitely one of those travelers who has overlooked Innsbruck. I’ve connected through its train station multiple times, but your photos have me convinced that it needs to be a visit! Its riverfront looks equally (or more so) as beautiful as Salzburg’s!

Oh my goodness, Innsbruck looks absolutely picture perfect! Your photos are stunning. I love all the ones with the domes and mountains in the background. I just love that you stayed in a hotel from the 1300’s, how cool! Pinning! #farawayfiles

Wow your pictures of this small town are gorgeous. I’ve always wanted to visit Austria. I love smaller cities with a deep history. I’ll definitely wing adding Innsbruck to my list of places to visit. Thanks for sharing.

Innsbruck looks fantastic and it’s somewhere I am yet to visit! Definitely somewhere I want to see – it looks great and you photos are fantastic! So much history and plenty to see and do!

Such evocative and beautiful pictures! I love the mountain backdrop behind the church tower and how you show details of the craftsmanship. Would love to see all this for myself one day.

I’ve seen a number of places in Austria but I’ve yet to visit Innsbruck. By the looks of it though from your photos Innsbruck looks beautiful. Definitely worth visiting especially for that setting and the architecture. Thanks for sharing #FeetDoTravel

The detail in the architecture & design of the buildings in Innsbruck is spectacular. There’s plenty to see and do there. Definitely one for the list. 🙂

[…] Austria hosted the 1976 Winter Olympics and still maintains the Bergisel Olympic ski run. This lovely town at the foot of the Austrian Alps provides a picturesque place for skiers and visitors alike to […]

Ambras Castle in Austria – The World’s Oldest Museum – California Globetrotter March 1, 2018 at 6:00 am

[…] Castle is mentioned in literature dating back to the 10th century, even before Innsbruck became a city about 800 years ago. Ambras was long ago the seat of power for Counts that ruled […]

I can’t believe I missed Innsbruck when I was last in Austria! Feeling very inspired by these photos to go back. Thanks for sharing.

Beautiful Innsbruck! Your photos are simply stunning! I usually do not like cities but this looks like a city I would love to explore someday. Love the background of mountains everywhere and the colorful houses. 🙂

This reminds me of my ski season I did in Lech near Innsbruck; jumping off the train to land in snow on the train platform then making the pretty trip to the alps. One of the best things to do is taking the train from Innsbruck to discover Austria and down to Italy; such a beautiful train journey.