Did you know you can walk across the Golden Gate Bridge? It’s the second largest suspension bridge in the United States, but it’s less than 3 miles and is easy to walk. You can go part way and turn around if you wish. The trick is to go on a day when the famous San Francisco fog lifts and you can see the top of the iconic red girders. 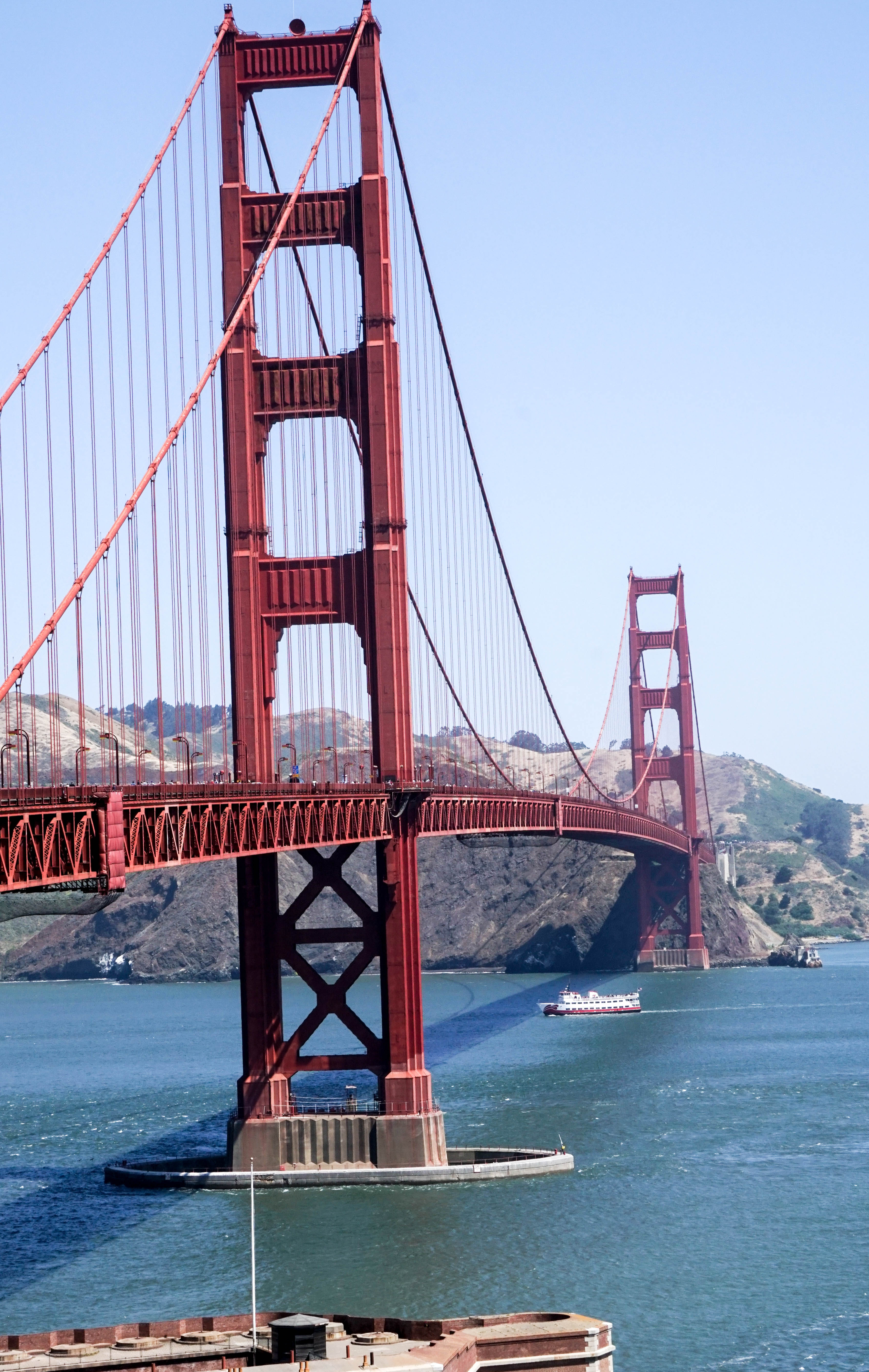 We arrived on a glorious, sunny and clear day.

The Golden Gate Bridge opened in May, 1937 after taking 4 years to build. The roadway deck is held up by metal cables suspended from curving main cables draped over the two red metal pillars that give the bridge its recognizable outline.

Sometimes bikers and pedestrians are on opposite sides of the bridge, but often they are together. It was easy dodging bike riders when we first started walking, but as more and more people arrived, the bridge grew congested. I’d advise trying to schedule your time on the bridge in the morning for a more leisurely tour.

What a Spectacular View of San Francisco

Hanging out, looking at the view, is so much fun. There’s Alcatraz, the former prison on the island just off the coast. And then there’s the city skyline.

Directly under the end of the bridge is Fort Point, which was built in the 1800s to protect this entrance from the ocean to the city. The bridge was designed to fit right around the fort. You can see the canon placements on the roof of the fort, and you can tour the fort after enjoying the bridge.

The Detailed Architecture of the Golden Gate Bridge

All the tiny rivets holding this massive bridge together are worth pondering.

Even the original sign announcing completion of the bridge was made in metal letters.

This model shows how the bridge adapts to the wind and weather by swaying up to 28 feet sideways. I was glad I read this after we were back on land.

We ended our super fun morning with a visit to the welcome center gift store. Here’s a book with probably more than you want to know about the bridge.

A book about why the Golden Gate Bridge is reddish orange enlightened us on this topic. We wondered why it wasn’t golden. This area was called the Golden Gate long before the bridge existed. Paint colors were considered, but some were too bright in sunlight, and some were too dark at night, and other colors were rejected for a variety of reasons. Finally, the present color was decided on and apparently pleased all parties. And it remains the same color, painted many times of course, 80 years later. 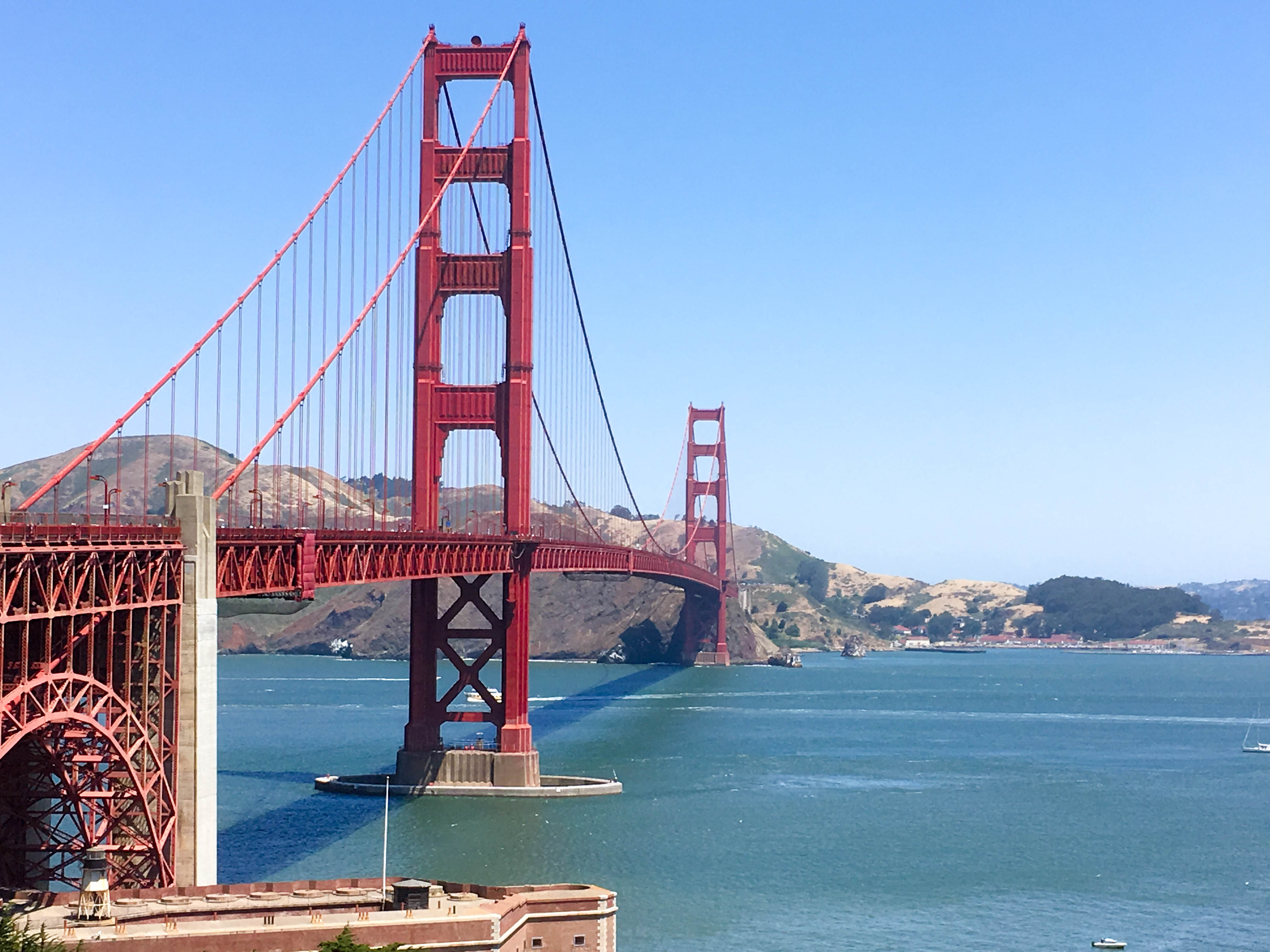 Whenever you are in San Francisco, plan a morning to spend walking the Golden Gate Bridge. Hope for good weather, wear a jacket because it will be windy, and enjoy! 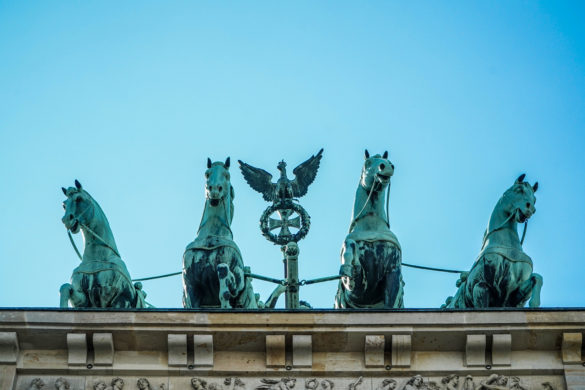 Beautiful shots, Sharon! I love San Francisco and never tire of photos with its scenes.

The Golden Gate Bridge has a similar ingenuity as the Eiffel Tower – a massive and strong looking landmark and nice to see from a distance:) Do you know if the name of the bridge also has to do with the Gold Rush era (Since San Francisco grew so much then)? Thanking you for fantastic images of this bridge for All Seasons and wishing you a lovely week, Sharon!

We would have loved to walk across the last time we were there, but it was pouring rain. Never did get a reall clear picture fof the bridge as it was covered in fog most of the visit. Have a great 4th!
http://travelingbugwiththreeboys-kelleyn.blogspot.de/

Magnificent views of the beautiful bridge
Have a great week!

What a lovely thing to do! Loved your photos so much. And I loved reading why they chose orange for the color!

No matter how many times I see it up close and personal or in photos, I can’t get enough of it. Lovely shots!

Taken For Granted at

I have crossed the bridge many times, but never walked across. Always in a hurry to get somewhere.

It is such an amazing structure. I hope to see it with my own eyes one day

Nice, I live in the Bay Area and work in San Francisco. The funny thing is that I am about go do it today.

I have a new item to add to my bucket list, walking the Golden Gate Bridge. I had no idea it was three miles long so it would make a pretty good round trip.

Great photos!
Thank you for linking up at http://image-in-ing.blogspot.com/2017/07/splish-splash.html

I have driven across it many times in the past. I have ridden my bicycle across it too but I have never walked across it.

I don’t know why I haven’t walked across the bridge before! Always wanted to! Next time I’m home and visit SF, I’ll do it! The views look amazing from there! #CityTripping

Interesting! I didn’t know that the area was called Golden Gate before the bridge existed. I’ve wondered why the bridge itself wasn’t golden like it was named. Now I know why!

Great views all around. I’d love to visit San Francisco.

Curious as to how someone with a little issue with heights would do up there? How was that? The swaying thing is crazy and you did luck out with the weather! Stunning pics as always Sharon – thanks for sharing with #FarawayFiles, Erin

Great photos. Last year, I actually biked across the bridge and it was such a great experience. I know what you mean about how congested the bridge can get. Thanks for sharing on #TheWeeklyPostcard.

I’m afraid of heights but I gave this a go – and didn’t make it very long! But I’m still glad I made it a ways to see the view from the bridge!

Harmony, Momma To Go at

We are heading out this way later this summer will have to keep this in mind. Didn’t realize you could walk all of part of it #weekendwanderlust

We drove across the Golden Gate bridge many, many times, but never walked it. I can see now that I missed a lot of great photo opportunities however, so next time I’m in San Francisco I’ll make sure to go. #TheWeeklyPostcard

You were able to capture the bridge on a gorgeous day. I had plans to bike it (with and electric bike since it was going to be a long route) but the day was foggy as you had no idea. The thing is that we had three days of perfect sunshine and I didn’t focus on the bridge on those days. I left it for last and it didn’t happen. Hope I am luckier next time (and check the weather forecast too). #TPThursday

I didn’t know you could walk across. I love your photos, they are so vibrant and colorful.

I loved all your photos. You were lucky and got a beautiful sunny, fog free day! I’ve been to San Fransisco a few times, and never thought of crossing it. I only just stare and admire it, whether its from Fisherman’s Whart or on the boat to Alcatraz. I will have to change that next time that I am there.

It’s incredible that the bridge can sway up to 28 feet! I wish you hadn’t told us that!

Jasmine, Your World Traveller at

Thanks for sharing this post. I wished I had walked the Golden Gate Bridge. All I did was photograph it from a distance. I found it a very looong walk but I would certainly do it if I get the chance again.

I’ve done the walk over the Golden Gate Bridge and loved it! When we stopped right where you did to look down at Fort Point, we could see surfers there. Doesn’t seem safe, since there’s no beach, just rocks, but it was fun to watch them!

How interesting! The rivets kind of look like braille. Good to know about the paint colour too. I presumed it was once “golden” and had rusted to this colour, lol!!! Oops!

What a great experience. You got really good weather. I’m glad it wasn’t too windy for you. Interesting to read about the Golden Gate name…I had wondered! I’ve just added this to my list! Thanks for linking #citytripping

Maria Ingrid | Wander with MI at

Thanks for all the tips and information.. Hope I can visit this place soon, as it has always been part of my bucket list..

Laura @ 48 No Interstate at

I loved taking your photo tour of your walk across the bridge! I ran across it during my visit to SF last year so only took one or two photos. It remains one of my all-time favorite vacation runs! #theweeklypostcard

Beautiful photos! I can’t wait to walk on the Golden Gate Bridge next year, I’ll probably walk one way, then take the bus for the return trip. Anyhow, I’m very excited to see it with my own eyes. #TheWeeklyPostcard

You got great shots and a very clear day. I love to view the bridge from Marshall’s Beach. It looks so pretty from there. #weekendwanderlust

I’m really hoping to take my Girl Scout troop to San Francisco in a few years. They’ll be “bridging” to a new rank, and I figure that walking across the Golden Gate Bridge would be a cool variation on the traditional Bridging Ceremony. (Last time, they walked across a pallet in lieu of a bridge.) Thanks for the details, many of which I did not know.

I can’t explain it but I have always had such a fascination with the Golden Gate Bridge. I think it’s just one of those landmarks I always used to see on TV shows and films – one of the first places I remember thinking “I’m going to go there one day” – Looks like you had a really cool day out! #farawayfiles

I have always been so fascinated with the Golden gate bridge and this looks like a great way to really appreciate it in detail. #Farawayfiles

Faraway Files #37 | oregon girl around the world at

[…] Our World over the iconic Golden Gate Bridge. A beautiful day out with stunning views of the Bay. WALKING THE GOLDEN GATE BRIDGE | Exploring Our […]

Many years ago, Rob ran across as part of a 10k but, for some reason, we’ve never included a walk across in our plans. Great idea though, so next time in San Fran for sure! Thanks for sharing on #TheWeeklyPostcard!

The architecture of this bridge is stunning. I didn’t know that it is possible to walk on it! Excellent post!