Paris has so many must-see places, and here’s one you may not have heard about to add to your list: The Conciergerie. Where is this? And what is it? All I knew going into the building was that Marie Antoinette spent her final days imprisoned here. A fascinating tour taught me more about this centuries-old place.

The Conciergerie was first a palace on the banks of the Seine right in the early center of Paris, near Notre-Dame. Built by King Philip the Fair in medieval times, the palace still stands. The center and kitchen, added by King John the Good, are open for touring. (Don’t you love those names?)

Of course, we know that the kings and queens of France took up residence in the Louvre and Versailles as time went on. They left the Conciergerie at the end of the 14th century. So this palace became judicial offices, which it houses even today. And part of it was converted into a prison. It’s most famous occupant was the queen of France during the days of the French Revolution, but many others were housed here until they lost their heads. Displays and signs along the tour provide information about the Conciergerie.

You can explore the exercise yard. The spikes sticking out the roof give the idea that escape was not an option. 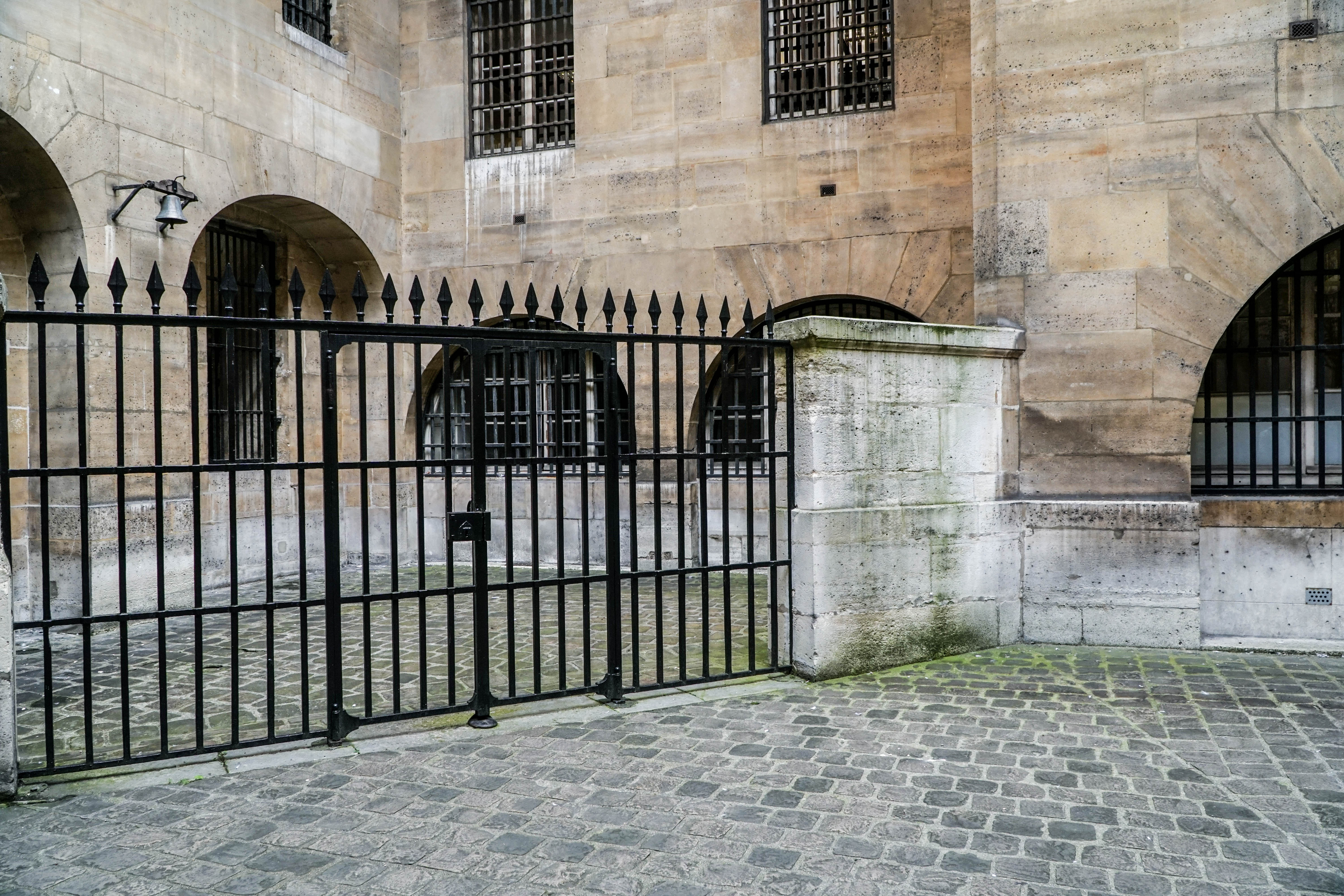 Here’s the room where the prisoner’s head was shaved in preparation for the guillotine.

Marie Antoinette’s cell, where she spent the last 10 weeks of her life, was replaced by a chapel. The wall has a “tear” motif. The queen’s chair is on display.

Art depicts the final day as Marie Antoinette made her way up the stairs to the cart that would take her to the nearby square for her beheading. 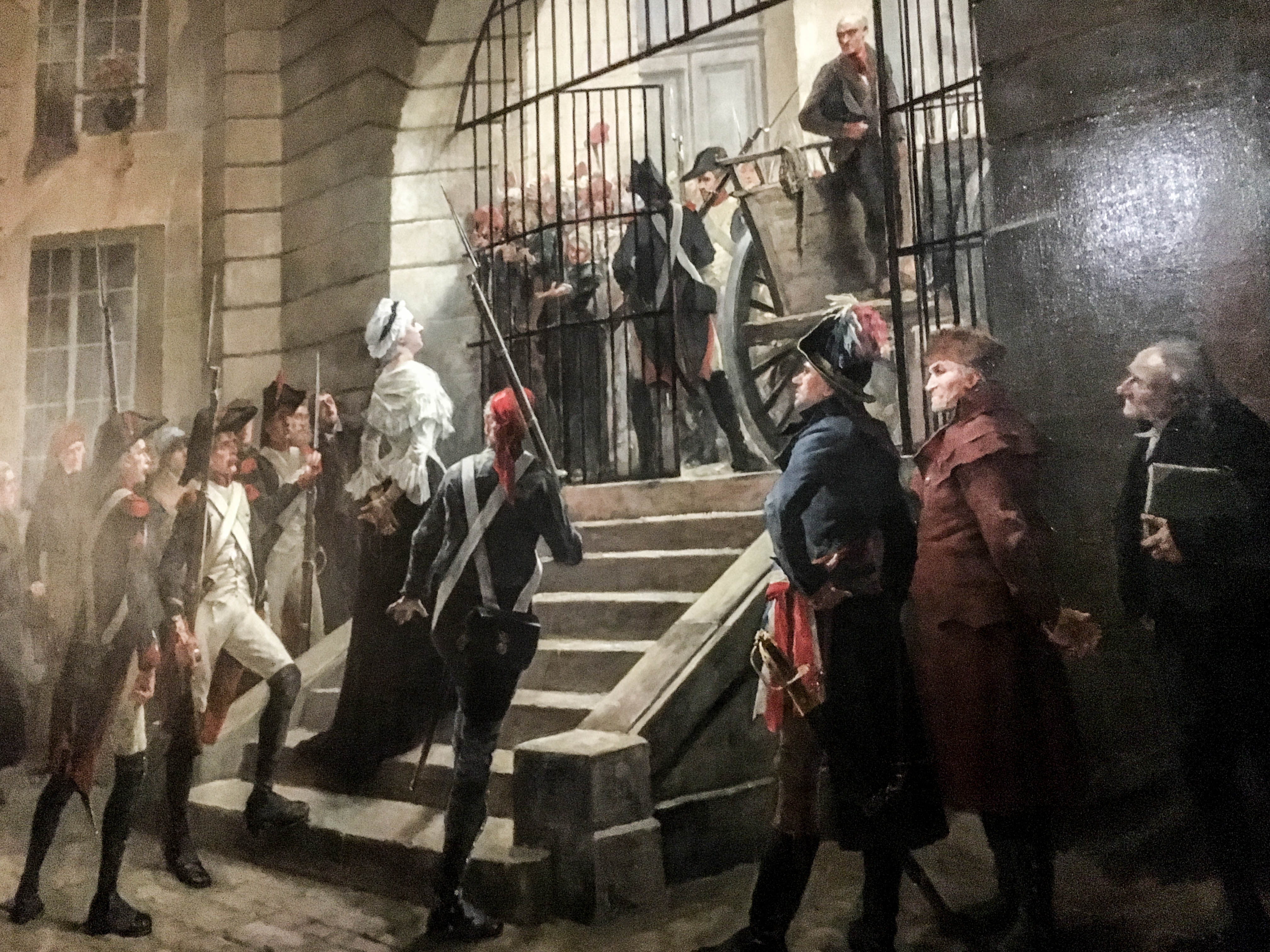 It appears to me that all this honors Marie Antoinette and that she is held in high esteem now. Gift shops have memorabilia of the queen, and I saw a young girl clutching a coloring book of Marie Antoinette to buy as her souvenir.

The winds of history change. Those held in a prison cell may one day be honored. The walls of this palace, keeping their place in the center of Paris, have seen so much. It’s awesome to spend an afternoon here, imagining all that’s happened in this palace. 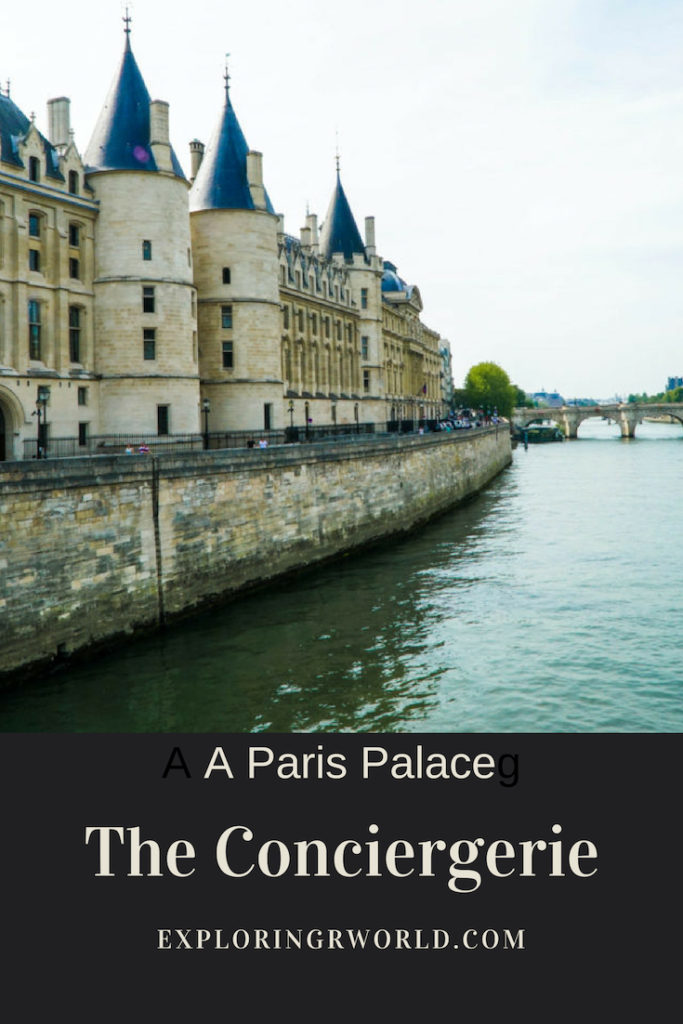 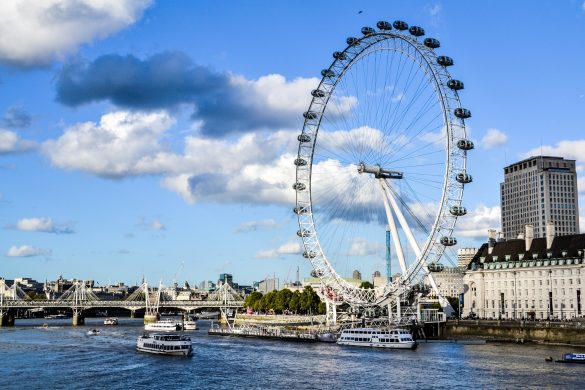 Riding High on the London Eye 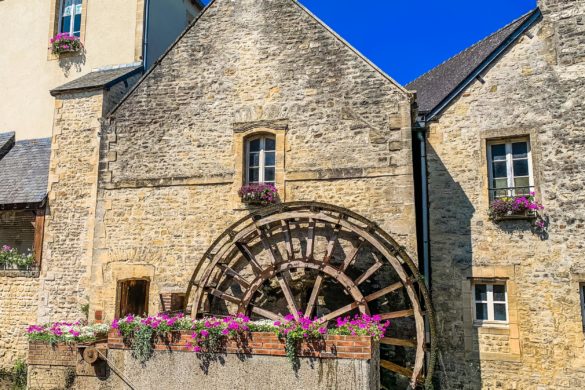 That is just amazing!

I enjoyed this Post again for the Tuesday theme IMAGE-IN-ING.
HEIDRUN

Chilling and fascinating!! Beautiful photos too.

Oh, poor Antoinette1 What was she beheaded for, again? Those were turbulent times for France, as they are now. Hopefully Macron will have a good influence to get France back to order and peace:) Now you make me curious where else you have been in Paris this time!
Many thanks for sharing this detail of French history with All Seasons! Have a lovely week:)

Walked past many times but never been in!

I must say this is a stunningly beautiful place, despite its gory history.
Thanks for linking up at https://image-in-ing.blogspot.com/2017/09/pop.html

Long ago and far away and yet, in many ways, people can now be as barbaric as those who beheaded Marie Antoinette.
For instance, forest fires have ravaged much of British Columbia, my home province here in Canada. For quite a while we believed them to be wildfires, caused by lightning, until evidence turned up that some of those raging fires were deliberately set by people as blackhearted as any medieval villain.
My soul revolts at the thought of a deliberately-set forest fire. And now there is smoke in the air here in southeastern Alberta because someone threw a burning cigarette out a car window, despite the long, hot, dry summer weather.
So, medieval minds lurk in 21st-century bodies.
Kay
An Unfittie’s Guide to Adventurous Travel

What a beautiful building1

Nicely done post. I can’t imagine the fear and dread as they were shaving her head.

Marie Antoinette is one of my favorite historical women! I find her so fascinating! I read a really great trilogy about her and a book about Madam Tussauds and the beginning of her company during the Reign of Terror! Next time I’m in Paris I want to visit the Conciergerie! #CityTripping

Wow, from a historical perspective, the Conciergerie is really fascinating. Thanks for sharing this little seen gem.

Sharon,you visit so many interesting places. Really enjoy your posts. To me, Marie Antointte wasn’t an interesting historical figure until I discovered she was a Habsburg (daughter of the Holy Roman Emperor). Remember last week I wrote about Vienna? So, while we were there we learned a lot about her and her family. so intriguing how the reigns of Europe were united thru marriage.

You have to give her credit for standing by her man though I probably would have fled back to Austria with my children in tow. Not sure how much truth there is to the movie about her, but if so her husband was kind of pill. He should have reigned her in to a little on her spending but he probably was spending just as much. She was just a girl when the got married.

Such an interesting place despite its rather gruesome history. Definitely worth a visit. Youbr magw me realise I need to swot up on Marie Antoinette. Thanks for linking #citytripping

I love the arches on the ceiling.

Beautiful images. I had no idea you could visit Marie Antoinette’s prison. I do think it’s crazy that kids were buying Marie Antoinette coloring books at a place where she was held as a prisoner, though…

Among all the history in Paris I think this is one of the most atmospheric and fascinating spots – It’s amazing that it doesn’t seem to be better known as well. Thanks for the virtual return visit for me #farawayfiles

What a beautiful building and fabulous slice of French history

We visited this Palace during our last visit to Paris and found it fascinating! We didn’t really know what it was all about at the time, but were so glad we stumbled upon it! #farawayfiles

Another fascinating tour, your posts are my favorite in linkups.

What a fabulous place but I’m sure Marie didn’t think so from her prison. There’s so much history to learn, little by little, when we visit such places.

Wow — such beautiful architecture for a prison! Thanks for sharing!

This is very interesting! I never knew that there was this tour to the prison in which Marie Antoinette was jailed and beheaded because I’m a history buff, so stuff like this intrigues me and I would have gone for the tour 🙂 Yes, I love the names – King Philip the Fair and John the Good! Truly fascinating… #FarawayFiles

I didn’t know it’s open for visitors. But then again, I visited Paris ten years ago so.. #theweeklypostcard

The room where they shaved her hair for the guillotine is pretty disturbing… better than seeing an actual guillotine though! Yes, it’s quite strange how some people seem to see her as a hero rather than a villain nowadays. But hey, neo-Nazism just goes to prove that there will always be those who support even the worst of people.

I had not heard of the conciergerie before! It looks really interesting, and I love your photos. It is on my list for my next trip to Paris. Thanks for sharing on #TheWeeklyPostcard

It’s many years since I visited the Conciergerie. We were in Paris in April but there’s so much to see that I didn’t get the chance to go back. However, it’s on my bucket list for next time. Thanks for the photos and the history. #AllAboutFrance

What an amazing building, on my list to visit when next in Paris

Hello Sharon, thanks for linking up with #TPThursday this week!

That is very sad. I can’t imagine what it would be like to have your head shaved and then be led off and beheaded. The shaving of the head is weird.

I had actually wanted to give the Conciergerie a visit while in Paris, but didn’t get to fit it in my itinerary, so thank you for the quick tour! It looks like an interesting place to visit.

Those vaulted ceilings are incredible arent they? I wonder if the Queen appreciated them in her final hours? Thanks for sharing on #FarawayFiles

All the times I’ve been to Paris, I’ve never been in the Conciergerie – thanks for the intimate look inside. When I hear Marie Antoinette all I can think of is “Let them Eat Cake,” and “Off with her head!” She was definitely interesting! Thanks for sharing with #FarawayFiles, Erin

Having just come back from France I think we must include this in one of our annual trips one day. #FarawayFiles

Trekking with Becky at

Amaaaaaazing! I had no idea this place existed, and it’s on my long list of things to see/do when I make it to France again some day. My jaw was dropped the whole time I read this, and I have to scroll through your shots a few more times. 😀 THANKS for posting!

Such an impressive building; despite having lived in Paris for 10 years I never visited, how bad is that?! The display of hair and scissors gives me the shivers…thanks for sharing this with #AllAboutFrance

One day I will get to Paris and will try to visit as it sounds a fascinating place to look around, even with such a disturbing history #allaboutfrance

Wonderful photos and commentary Sharon! I’ve never seen details of the interior before so thank you for sharing them. You’ve really made me want to go (there’s always a line that discourages me), but I’ll make it a priority to visit this winter!