It’s such a moving experience to visit the D-Day beaches anywhere along the World War II invasion area on the channel coast of France. Here’s a map that clearly shows the layout of the five Allied sectors. 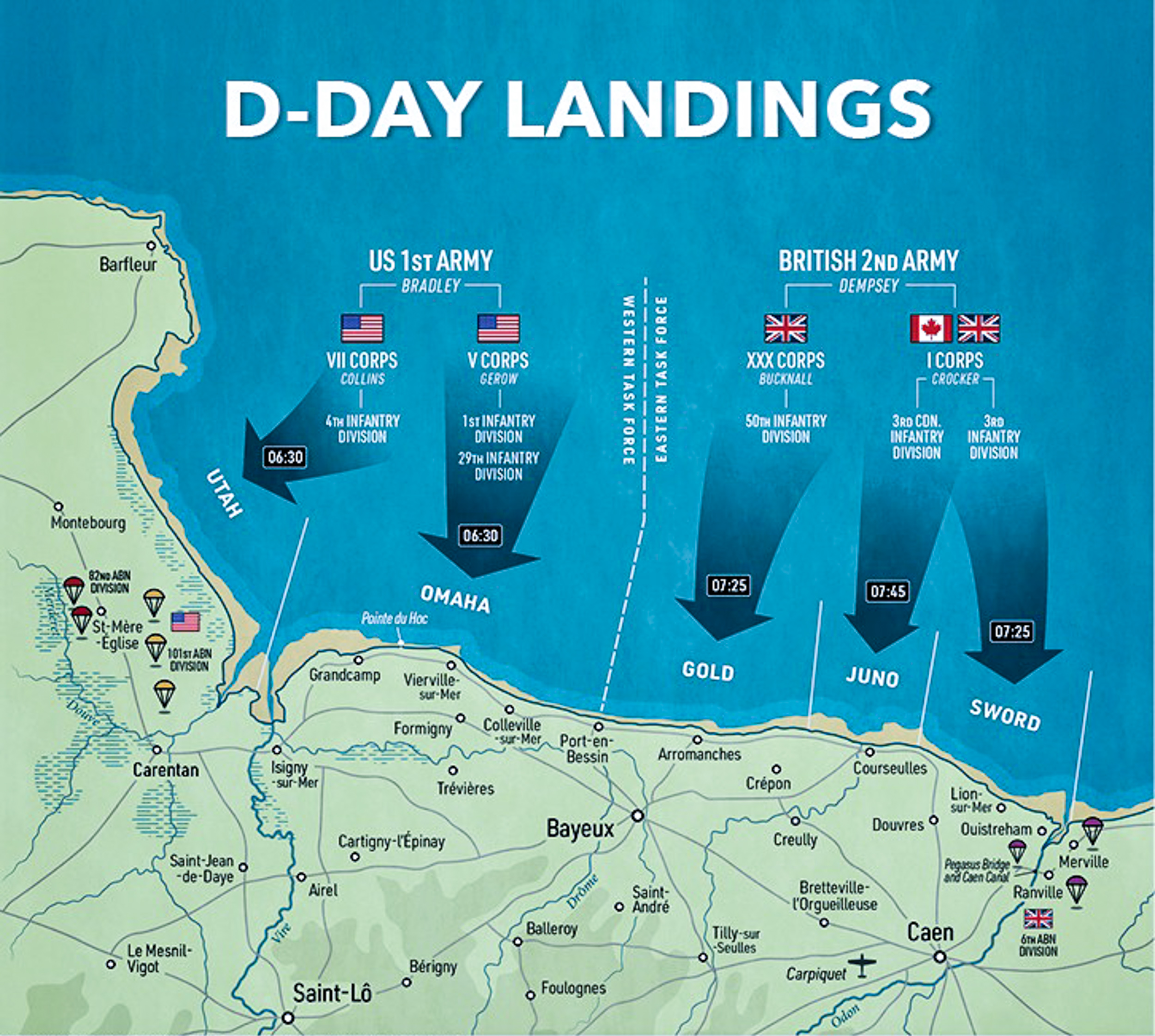 For the first time, I recently visited Gold, Juno, and Sword Beaches on the coast of Normandy. One of my goals on this trip to Normandy was to learn more about these British and Canadian beaches. As Americans, we tend to focus on Omaha Beach and Utah Beach. I wanted to get a more complete picture of what happened along all 60 miles of coastline on D-Day. So I booked an all-day tour with Overlord Tours to find out more about Gold, Juno, and Sword beaches. Our guide Rethro proved to be not only knowledgeable but also personable. The others in our group were British, and we took some good-natured teasing for our American lack of familiarity with British history, which was delightful.

Let me take you along to some of the highlights of these historic beaches.

Sword Beach and Utah Beach lay at the east and west ends of Operation Overlord. Paratroopers dropped behind the beaches in the middle of the night to prepare for the invasion from the English Channel. The idea was to hem in the Germans from either side. So it’s important to go behind the shore when visiting these two beaches. Our tour began at Pegasus Bridge, a few miles inland from Sword Beach. This bridge over the Caen Canal was a crucial Allied objective. Gliders of British troops landed just after midnight on the canal banks. Here the first casualty of D-Day was Lt. Brotheridge, who was shot while leading the charge over the bridge. The British eventually pushed the Germans off the bridge and held on until the troops landing on the shore broke through to relieve them.

Today you can walk across the replacement bridge, which is built in the same design as the 1944 bridge. Schoolchildren painted a colorful mural thanking the British troops who fought to liberate their country. The design includes puzzle pieces showing that all the Allies worked together to complete the picture of freedom.

On the west end of the bridge the historic cafe serves coffee or lunch. And a plaque proudly announces that this was the very first French house liberated in the wee hours of June 6, 1944.

I happened to visit at the right time to see this drawbridge in action. Boats still wait for the bridge to go up to continue their river journey.

The 1944 bridge can be seen at the museum around the corner. With its displays of World War II memorabilia and photographs as well as the full-size bridge and vehicles, this museum is well worth a visit.

While the landing of the British paratroopers in the night of June 5 – 6 yields so many fascinating stories from behind the beaches, of course there is also Sword Beach. This is where the Army and Navy troops landed at dawn on D-Day. 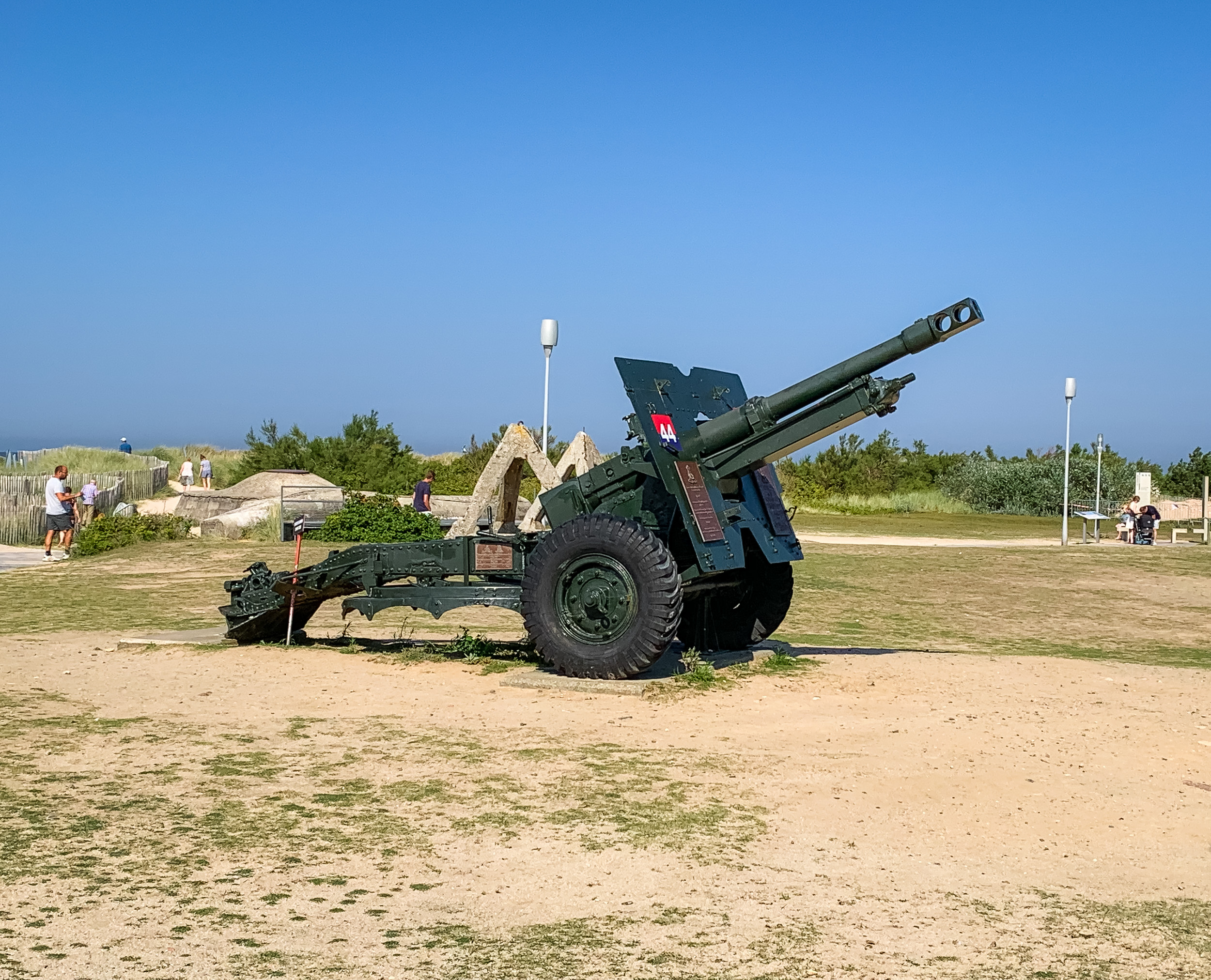 This section of coastline was one of the most heavily defended on D-Day. In the first wave of men ashore, half were injured or killed. The Canadians fought on bravely and eventually captured more towns and land than any other battalions involved in the invasion. The little towns on the beach here remember what the troops did for them, 75 years later.

This is the home in Bernieres-sur-Mer where journalists lived in the summer of 1944.

This photo, displayed on a stone wall, notes: “How handsome he is my liberator, everything is beautiful, I feel like dancing.”

Here’s our little tour group walking on the sands of historic Juno Beach.

Gold Beach and the Mulberry Harbors

Gold Beach, in the middle of the five beaches, included the fishing town of Arromanches. This was the site of an amazing feat of engineering that resulted in a working port just days after D-Day. Cement pontoons brought on ships formed the based of the operations. In the summer of 1944, 500,000 vehicles and four million tons of materiel came ashore in Arromanches. Of the original 115 pontoons, 20 survive despite the pounding of the rough waters.

Here you can tour the wonderful Arromanches Landing Museum and learn about what the British accomplished here on D-Day.

After 10 hours crammed with learning, emotions, and experiencing these beaches firsthand, it was time to say good-bye to Rethro. Our tour ended, but I will certainly by thinking about all we took in this day for years to come.

Read more about what it’s like to visit the D-Day beaches in an article I wrote for Travel Awaits.

Guides to help you plan your trip:

Another great adventure with you. I do love our journeys together.

What a great endeavor of you Sharon to get to know more about these bridges freed by the UK troops. You think in a more international way than most:) For a book I am writing I read specific details about the “bridge one too far” at Arnhem, and the planned strategy of the Allies. Since then i understand how important bridges are to conquer, because it cuts off the enemy! Also, I am beginning to understand the huge undertaking and the determined quest for freedom was against the Nazi powers back then. Freedom is a necessity to live a happy life! Many thanks for sharing all this specific historic information with All Seasons. – which should never become obscure or forgotten! Have a beautiful week:)

What great photos and an excellent commentary.

OH wow; what a wonderful way to learn so much more about history. Thanks so much for sharing with us.

Wonderful photos and a very interesting history. Thanks for the history lessons too..

Oh wow, thank you for that great historylesson, I really enjoyed reading theis.Its always fun to get a bit of education in whilst you’re travelling 🙂

Your passion for this historical topic is clearly evident. It’s so important to share these experiences so we don’t forget the importance of this event — here in the UK we celebrate 11/11 by wearing poppies “lest we forget” – I’m surprised that that poppy tradition hasn’t caught on in the U.S. to the same extent.

Wow, this is really interesting! I guess because we get to see mainly American documentaries as well, we in Europe also hardly focus on the other beaches, which is very unfair as most of The Netherlands was liberated by Canadians, British and Polish resistance (who allied with the British). Thank you for this info, very enlightening.
#WanderfulWednesday

Thanks for sharing this interesting bit of British and Canadian WWII history. I’ve only been to Normandy once and concentrated on the American story. I love this part of France and hope to return and spend more time there. Hopefully, we’ll be able to get to the areas you mentioned.

What a gorgeous little town. Looks like a fascinating (and moving) visit. #WanderfulWednesday

Amazing photos..I feel like I am standing right there with you. So many emotional feels just looking at these and reading your experience.

Thanks for sharing your tour with us! I would love to visit there one day, but until then, your photos are a great sight!

Christine @ The Journey of Christine at

What an amazing experience! Really puts things in prospective. My husband and son (and me) would love to visit Northern France one day. My husband was a history major and my son has always been interested in WW2.

A fascinating insight into D Day, thank you for sharing.

Fascinating and sobering. I’ve been to Northern France a number of times but for some reason never visited here. Will do on my next trip.

What an insight to D Day. Enjoyed your photos. Thank you so much for sharing this.

What a powerful place, with so much history and emotion. Thank you for sharing your experience.

It is so moving to see where the history took place. Definitely on my travel wish list. What an incredible history lesson to walk around and soak in.

We ate on a mission o. our European travels to see as many WW2 memorials as possible. Although these northern beaches have yet to make it o to our itinerary. What a great account. thank you for sharing and keeping these stories alive.

Thank you for sharing the beautiful photos and a fascinating information about D Da.

Thank you for sharing the beautiful photos and fascinating information about D Day.

Awesome post! Full of details, and well organized. I thoroughly enjoyed reading it and learning so much. The Sword Beach looks so peaceful and summery, but holds a lot of history!

What a wonderful experience! I am a history teacher, and I’ve wanted to do a trip like this for awhile. My in-laws just did this and loved it as well. There is so much to learn there!

Normandy is such a gorgeous place! I will make sure I visit this one next time I go to France. Nice to know about these historic beaches.

One of the reasons I love to travel is learning about the history of a place. Thanks for shining the light on some of these lesser known beaches, but equally as important! Thanks for linking up with #farawayfiles

Really informative post. Even though I live in the UK, I have never been to visit the beaches & I really like the sound of this tour. Such an important part of our history & reading this has definitely made me want to visit to hear the stories & see where it all happened. Thank you for sharing.

Really great article. We visited a couple of years ago and my favourite has to be the Pegasus Bridge and museum. There are so many personal stories in the museum that you just don’t get anywhere else. The letters and information about some of the brave soldiers really does hit home so much more than some of the other museums.