Utah Beach today is a windswept, wide swath of beach bordered by grassy dunes that wave in the breeze. It’s hard to believe this was the site of a major battle of World War II. A visit to Utah Beach in Normandy can include the beach itself, an iconic cafe, a large museum, and a drive through the farmlands where paratroopers landed in preparation for the assault on the beach. There’s a haunted farm, countless memorials, and buildings still pockmarked with bullet holes. I recently was able to spend two days in the Utah Beach area, and it was a dream come true for me. Here are some of my favorite experiences.

Utah Beach was added to the D-Day plan shortly before June 6, 1944. The idea was that the Allies would be closer to the prized port of Cherbourg. Both the paratroopers dropped in the night and the troops arriving by way of the English Channel in the early hours of daylight landed largely off target. On the beach, U.S. Brigadier General Theodore Roosevelt Jr., son of former President Theodore Roosevelt, realized his men were more than a mile away from the planned destination. His decision: “We’ll start the war from here!” By noon, he and his men had linked up with some of the paratroopers. By the end of this longest day, the Utah Beach men had advanced four miles inland, taking far less of a beating than those landing at Omaha Beach. We learned that the red-roofed house was here on D-Day. Fortunately, it survived. Most of the Americans coming across the English Channel and landing on Utah Beach on D-Day came in the Higgins boat, officially known as the American Landing Craft, Vehicle, Personnel (LCVP). A replica of this style of landing craft sits on Utah Beach as a memorial.

The memorial to the 90th Infantry Division of the U.S. Army sat in disrepair for years and is now cleaned up and standing proud. This one is personal to me because my dad later served in the 90th (357th Regiment). He was at Flossenburg in Germany, and the granite of this monument comes from the quarry there. Even though my dad landed in France months after D-Day, I felt a connection here.

This historic restaurant and shop on Utah beach once was a fisherman’s cabin. The Germans used it during World War II as a center for designing the defenses known as the Atlantic Wall. They added a concrete bunker in the back that you can see today. Until June 6, 1944, they used this for communications. The Allies took over on D-Day and used the bunker for naval communications for the next several months. It was soon renamed to honor one of the heroes of Utah Beach.

Here’s a photo from June 1944 of Roosevelt on the dunes of Utah Beach.

Enjoy a latte — or lunch! — and browse among the memorabilia.

Vets from World War II and the years after sign the walls. I was thrilled to happen on the signature of a vet I’ve “met” through emails, Vern Schmidt, who was in the 90th Infantry. When he learned my dad was later in the 90th too, we struck up a friendship. I was so happy to report to him when I got home that I found him in the Roosevelt Cafe! Found this guy, too. Ha ha!

And look at this orderly schedule for D-Day. The planners could not even imagine the chaos that was coming.

The Normandy Countryside behind Utah Beach

Problems arose at once, partly due to weather, partly due to more German strength than anticipated, and a myriad of other factors. Paratroopers were dropped far from their targets. Some fell into flooded fields that Allied intelligence failed to report.

In a fluke of history, a fire broke out that night in one of the main landing towns, Sainte Mere Eglise. The mayor had to ask the Germans occupying his town for permission to break curfew and fight the fire. The Germans gave the okay but of course had to guard the bucket brigade. In the middle of this, paratroopers fell from the sky into the midst of armed Germans who should have been asleep. One American got caught on the church building, was shot, but somehow survived the night and lived. A memorial hangs on the church 75 years later.

We decided to spend a day with a tour guide for this area, as we could get very lost trying to navigate the country roads. Allan was so knowledgeable about the D-Day events in the small towns. We learned so much from him! Here are a few of the highlights.

Marmion Farm was the rendezvous point for many of the paratroopers who had landed off target.

This is said to be haunted and sits empty, though a neighbor uses the land. The story is that the woman who lived here hanged herself. Her husband then hanged himself out of grief. When the Germans came, a soldier hanged himself. The Allies pushed the Germans out and took photos and film here, which were sent to the U.S. and were the first the public saw of D-Day. we went in the church in Angoville au Plain that served as a field hospital. Battles raged through this town, and it changed from German to American to German to American control. Two American medics treated all wounded through days of fighting. This church is really a memorial to the liberating troops and these medics. The windows were blown out and later replaced with stained glass to honor the 101st Airborne. The pews still show the bloodstains.

In Beuzeville au Plain is a memorial to Lt. Meehan of the 101st Airborne. His plane crashed in the field across the street.

Also across the street is the mayor’s office. You can see the charm of Normandy here.

The small towns near Utah Beach suffered from being in the line of battle. The people here remember their hard-fought liberation 75 years later. This is lovely, peaceful farmland now, but the reminders of those dark days are everywhere. It’s humbling to visit here and try to imagine what took place. Seeing the houses, the churches, the bullet holes still showing in the stone buildings, is an experience I will always remember. 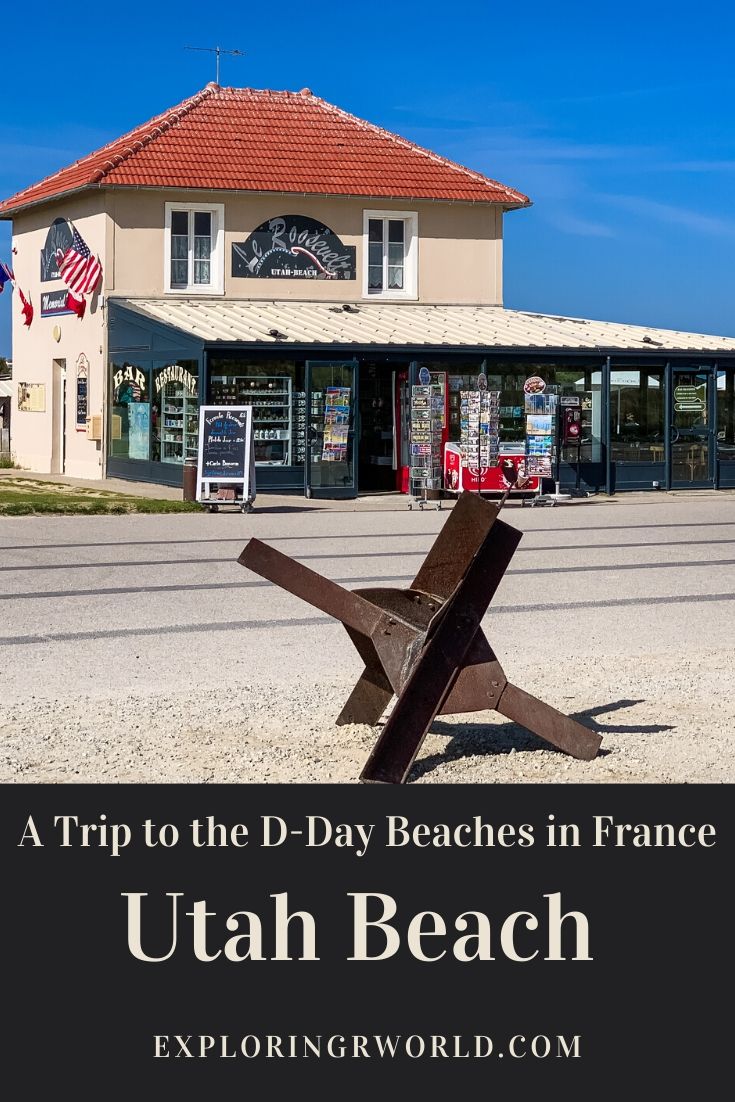 My grandfather came ashore there, I so want to get there one day.

What a fascinating visit you had. Thanks for sharing at https://image-in-ing.blogspot.com/2019/09/basilica-shrine-of-saint-mary.html

Was unfamiliar with this part of the war. You enriched us all at All Seasons, Sharon with this account with so many different details that could not be missed!. A big “thank you!”
Had to smile at your suggestion for me to write about my travels, family, and friends. Because I’m so familar with my own experiences, it’s hard to imagine that someone would want to buy a book with these:)

Another post filled with beautiful images and so much history and information. Outstanding! Loved our little tour.

We were there in March and the day was chilly, but the sky was blue and the surf was tranquil. It really is an awe-inspiring place. Thank you!

I enjoyed your detailed account of present day Utah and the memorials and museums. Excellent photos Sharon.

What an amazing way to experience history! I remember getting chills looking out at the Normandy beaches.

What a wonderful beach and what a history…
Tahnk you for showing so many wonderful photos from your trip. So intersting to see.
My father was also in the WW2. He was in the Finnish army and fighting against the Russians
///Laila
http://tillklippt.blogspot.com/

I gotta remember all your posts for next summer. I am taking the kids to Normandy in June. Hopefully, they won’t be too bored, but I have always wanted to go so they will just have to tuff it out.

What a true experience in history. Thanks for sharing with us 🙂

It’s great to see you joining us on ‘My Corner of the World’ this week!

Great article, jam packed with information on a really important part of France and history. You pictures bring it to life, thank you!

This is such a great way to learn and experience the history of World War 2. Lovely pictures too!

A great way to learn and experience, World War 2. The photos are great too!

What a fantastic way to learn about the history of WWII. I would be so emotional going here. D-day is a hard day to process but you have done it so well. Thank you for sharing.

IT had to be so special to see the signature of someone you know on that wall! This is a great post, Sharon; thanks for sharing your experience; appreciate the history lesson, as well (a lot of it was new to me).

I enjoyed reading your in-depth blog and your beautiful photos! Thanks so much for visiting and commenting on my blog.

Wonderful post! My husband has wanted to visit there for years and your post convinced him that we will make the trip. Thank you so much for sharing your experience.

So much history and bravery! Lovely shots.

Impressive images from D-Day beach. I was never been there, so i enjoy your pictures.

I am loving your posts about the D-Day beaches. I’m a huge WWII history buff and I would love to visit these iconic beaches and pay my respects to those who sacrificed their lives for my and my children’s freedoms. #feetdotravel

I was so moved to see the bloodstains still on the pews in the church. This must have been an incredibly moving trip for you, especially with your family connection to the US troops that landed here. I really must bring my boys here one day. We love Normandy and we haven’t seen the Normandy beaches. Thanks for sharing on #farawayfiles

Sarah | Travel for a Living at

Great photos. We’ve visited the D-Day beaches three years ago. It is such a beautiful area, yet it has such a strange feel when you stand on those beaches. So tranquil, yet such a historic site.

I love your posts on WWII history. This part of France has been high on my list so it’s time to make it happen!

This is a great guide. Thank you for sharing!

Thanks for this guide! I love that there aren’t many people on those beaches, they look so tranquil and quiet.