The Opera de Paris is a glittering, elegant theater in the heart of the city. Also known as the Palais Garnier, the opera house opened in 1875 after being built at the request of Napoleon III. Architect Charles Garnier used a bold design that mirrored the flamboyant tastes of patrons of the arts. Today, the Opera de Paris is considered to be one of the most beautiful theaters in the world. Not a fan of opera? I’m not, and that’s probably why I skipped this on previous visits to Paris. On our last trip, we met an American family who named this their favorite highlight of their week in the city. So we made our way here on a sunny morning, and we were so glad we did! You can tour the theater and bask in the opulence. You can glide down the grand staircase. You can lean over the balconies and imagine the crowds that have filled this hall for more than a century.

Here are some reasons to include the Opera de Paris in your city itinerary.

The marble in a variety of colors, the curving lines, and the sculptures holding “bouquets of light” make this quite a stunning staircase.

Plush red seats face the large stage. Individual boxes include number 5 – made famous in the Phantom of the Opera. Some people come to the tour just to see this box.

The ceiling in the auditorium contains a painting by Marc Chagall, added in 1964. It’s a beauty.

This is one of many hallways and foyers.

The gold shines so brightly here. Mirrors and windows add light and depth. The theme of this room – and the Opera de Paris – is the lyre. Look for lyres in other places throughout the tour, such as window grates and doorknobs. 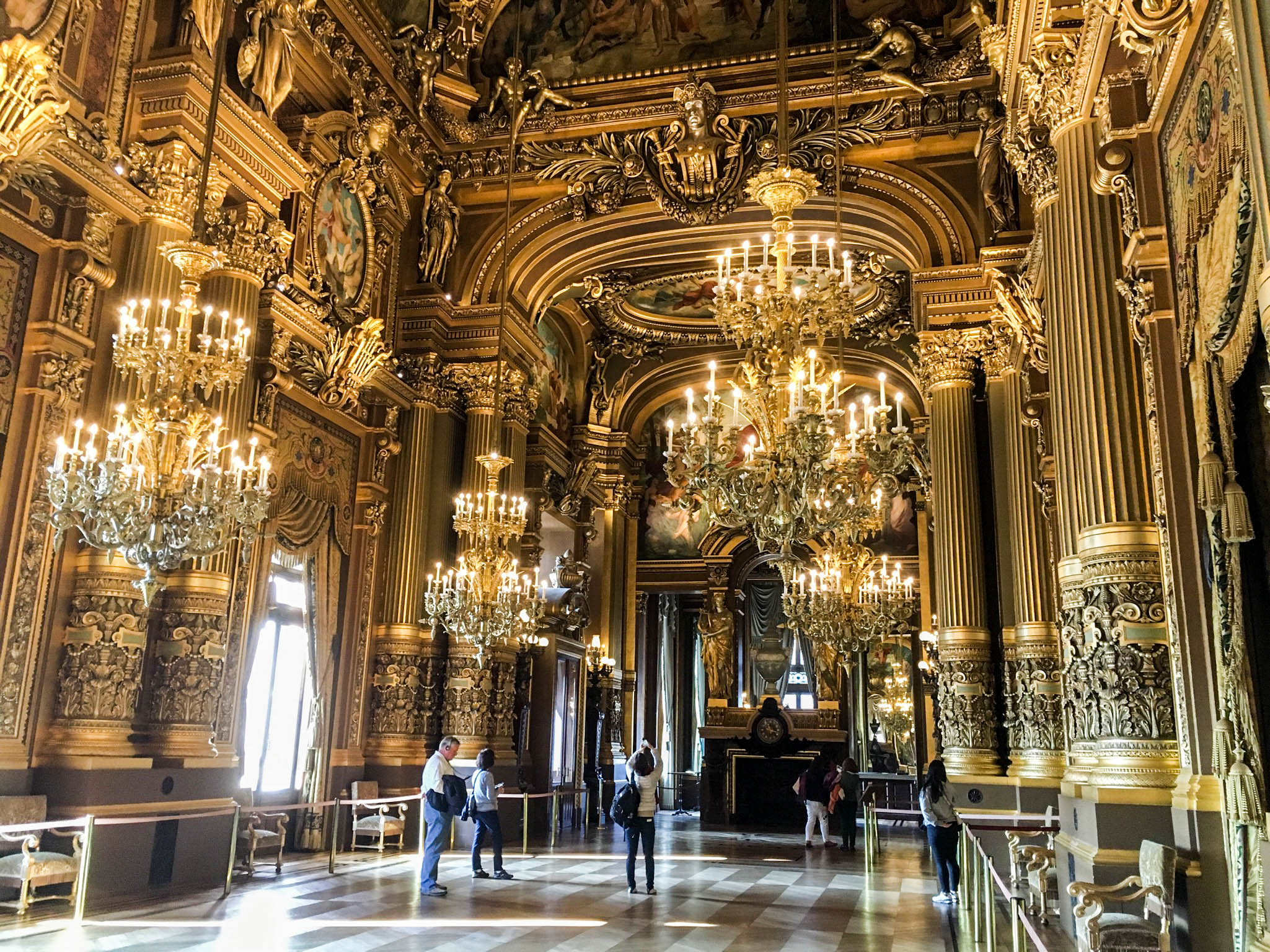 Gallery of the Orchestra

On your way out, you pass through this gallery, which displays statues of composers, including Handel.

The Opera de Paris is open every day from 10:00 to 5:00. Check the website for special closed times due to performances.

Tickets are available at the door and online. Pick up an audio guide in your language to fully experience the theater.

How about you? Have you found a surprising place you enjoyed after almost passing by it? 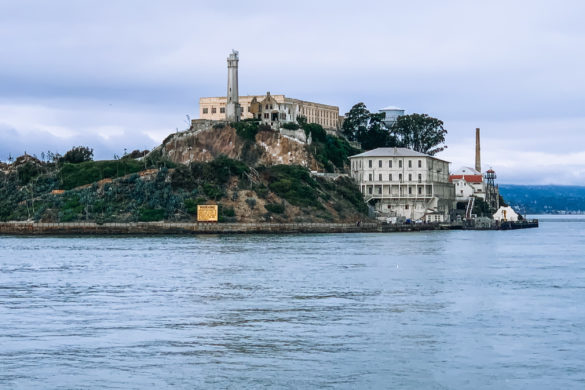 Ghent’s Castle of the Counts

Wow! I am also not really a fan of such opulence, but sometimes it is worth seeing amazing places, even if they are not to your taste. It looks like it is an incredible place to visit.

Oh my goodness!! What an amazing building!!

incredible!! the pictures are beautiful and what an amazing place!

Oh Sharon you have brought back so many wonderful memories with this post and exquisite photographs. We went to Paris to celebrate our 10 wedding anniversary (many years ago) and we sat in the square right next to this amazing building. We never actually went inside, but what a treat to have you share that incredible experience. It is stunning and if I return to Paris I’m certainly going to make sure I see it for myself.

Wonderful series of shots of a gorgeous building

You don’t have to be an opera lover to appreciate this incredible building. The details and the architecture are wonderful.

Wow! majestic and historical photography ~ thanks for sharing ~

Wishing you a peaceful and happy week ~ ^_^

It really is quite a sight and you did a great job of capturing it!

What a series of extraordinary architecture you have brought here..! Have a nice day ..!

Love the patterns of the pillars and the stairs in this opulent renaissance building! In the capitals of Europe there’s never enough time to see it all , sigh. Many thanks Sharon for showing the Opera House for ALL SEASONS! Have a beautiful week (has it flooded where you live? – saw some pics this week from friends in South. Cal.)

What a wonderful building! The details are just fabulous. I am sure the acoustics are perfect, too. These are great photos.

Wow! It is all I can say. I remember sitting at the steps of this building with my friends and having a good time. We didn’t go in and, now, I can see it was a big mistake. A building that surprised me was the Palau de la Musica Catalana in Barcelona. It is a spectacular building! #WordlessWednesday

That is so grand! I totally missed this in my Paris trips. I’ll have to make a note of checking this out if I ever visit Paris again.

ABSOLUTELY STUNNING! Ive been to Paris a few times but have never made it to see the Opera! Next time I’m definitely going! #CityTripping

That is an amazing building- I love the facade but I’d never actually been inside in all my visits to Paris. Thanks for giving me a taste with your wonderful photos. #citytripping

I definitely want to spend more time in Paris! Gorgeous!

It looks really worth to visit. Thank you for your post 😀

Such a beautiful place! There are plenty of beautiful buildings & places throughout Europe. Paris is especially lovely at night!

We went inside the entrance once just to see what my sister was raving about and it was so beautiful, we planned to come back for a tour but never made it so it is first thing on my list for next time we visit. #ciyttripping

I love that building. When I went they had a photographic exhibtion of the tunnels to the ‘lake’ which was great as I was reading Phantom of the Opera at the time….

The American family was right! Definitely worth the visit. Gorgeous pictures, Sharon. 🙂

Wow! Talk about “granduer” – this place has it all.

Such an opulent building and the marble staircase- incredible. I’ve never visited the Oper House in Paris but will put it on my list for next time I visit. Thanks for linking #citytripping

I’ve always admired the Paris Opera from the outside, thanks to your article I need to schedule a return visit to get inside!

Stunning! Great pictures. I would not have thought of visiting an opera house without a ticket to a performance, thank you for opening my eyes! #citytripping #weekendwanderlust

Wow! What an incredible place. It’s definitely going on my list of places to visit next time I’m in Paris (I avoided it for the same reasons as you, before. Thanks for sharing and enlightening me, Sharon. Happy travels. #AllAboutFrance.

I didn’t realise Chagall had done the ceiling. What a beauty! #AllAboutFrance

It’s absurd that I lived in Paris for 10 years and never went inside the Palais Garnier – what’s wrong with me? I must rectify this next time. Thanks for linking to #AllAboutFrance, great to have you join in (could you add a link to the linky in your list of linkups please).

The staircase is indeed amazing. I wonder how many metres of material are needed in the stage curtain. It must be an extraordinary amount. Annette #AllAboutFrance

I love the Paris Opera! Thanks for sharing these beautiful photos. #AllAboutFrance

One of my very favourite spots in Paris. It took us years to get around to visiting. Once we finally got there, I was kicking myself for waiting so long. #AllAboutFrance

I’m embarrassed to say I haven’t been there yet! Gasp!! I have wanted to tour it for a long time but always seem short on time.

I recommend you do the self-guided tour … avoiding a particular guide who spent the first minutes of the guided tour giving out her rules and regulations of the tour with a teacher vs young child approach! I decided to self-guide and was told that I couldn’t … I gave them 3 choices, find a new guide that didn’t treat her guests as total idiots, refund my money or let me in! They fortunately choice the latter option – but i was so disgruntled by the whole thing that I didn’t enjoy myself in the splendid building BUT I will return to Paris next spring and will start with the self-guided tour in any case! Paris is just adorable and one place to take some wonderful photos is from the top floor of the famous Galeries Lafayette store which is just opposite the Palais Garnier!