The Berlin Wall is familiar to us and yet much more complicated than I understood before visiting the Berlin Wall Memorial. The line of the Wall, built in 1961, zigs and zags all over the city, rather than being anything like a straight line. The Wall was about 96 miles long. It surrounded West Berlin in an attempt to keep East Germans from migrating there. Markers in the sidewalk today note the line of the Wall.

As the Wall went up virtually overnight, families and friends woke up to find themselves stuck and separated from each other.

For about 28 years, the Wall divided East and West Berlin, until it fell in 1989, marking the end of East German oppression and making reunification of the city possible. Most of the Wall was knocked down right away, but a section along Bernauer Strasse was kept that today stands as a memorial to all who lost their lives trying to escape from the East. At the Berlin Wall Memorial, you can read about those who lost their lives seeking freedom. About 136 people we know of died trying to cross the Wall. It’s thought that many more didn’t make it, but their names are so far lost to history. Memorials can be found in the sidewalks or grounds, too.

People escaped in “any way you could think up,” according to our guide, Finn. They were in car wheel wells and trunks and inside seats. They ran, they jumped from buildings adjacent to the walls. They tunneled.

One of the most famous escapees is Conrad Schumann, an East German soldier.  While the more long-lasting Wall was still being built, he leaped over the temporary barbed wire wall on his motorcycle and reached freedom. A sculpture of Schumann is around the corner from no-man’s-land. Colorful graffiti decorates the east and west sides of the Wall remaining today, but only the west side was painted when the Wall stood. It was a crime to get too near to the east side, so that side was plain cement. 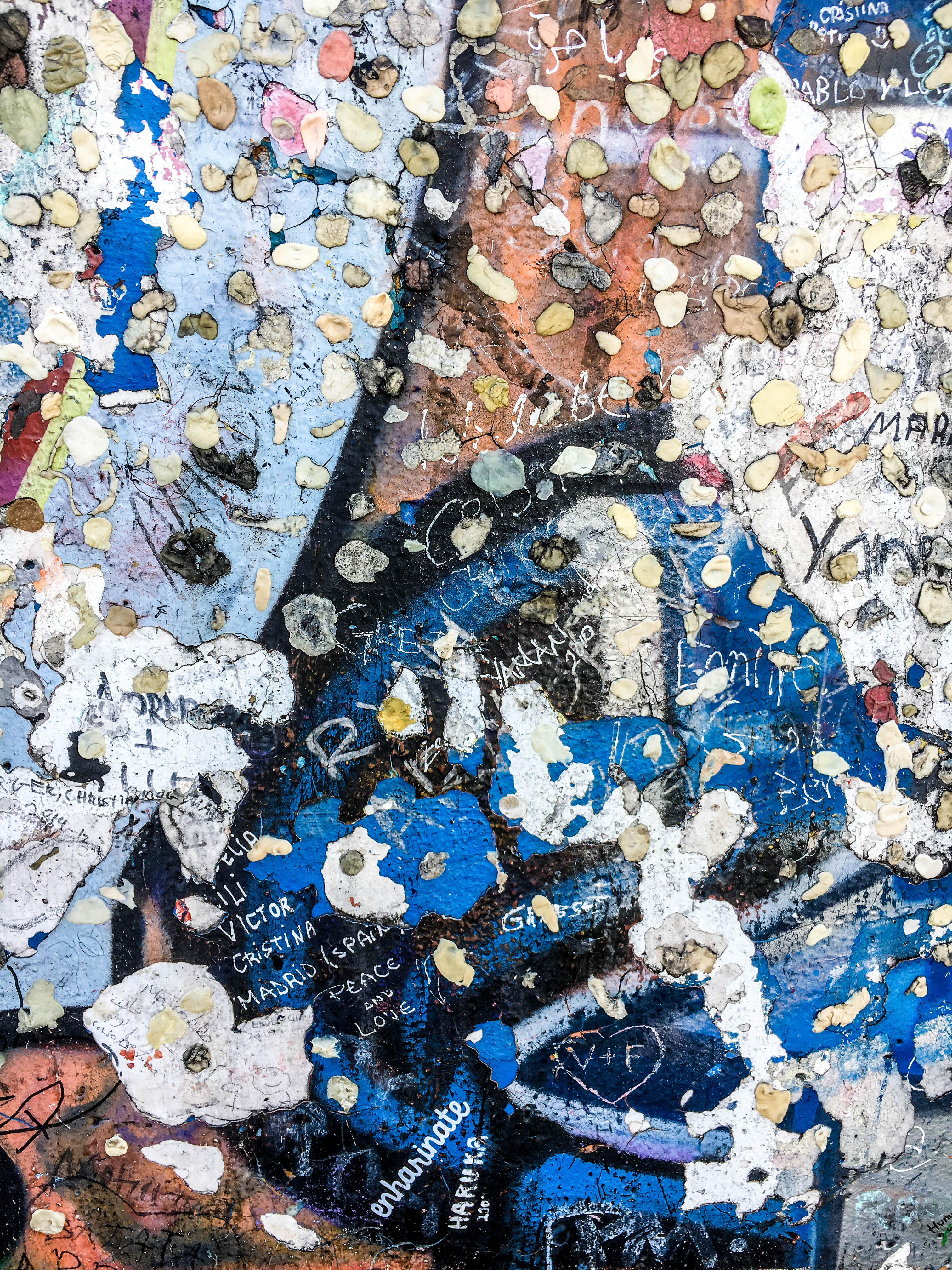 What surprised me was the breadth of the no-man’s-land or “death strip” in between the two layers of the Wall. And in this wide swath of land were guard towers like this one. Everything in the no-man’s-land was destroyed for the sake of the Wall. The demolition of the Reconciliation Church was especially hard to bear. The burnt cross is the only surviving part of the church. But the church was eventually rebuilt and today holds memorial services and other gatherings. The pastor of this church is the one who urged that a small portion of the Wall be kept intact, as a place of remembrance. And so this section about a mile long draws visitors from all over, encouraging us to pause and remember what happened here.

Along the higher ground at one end of the Berlin Wall Memorial are markers where the most successful escape by tunnel took place. On October 3, 1964, 57 East Germans escaped. The next day, the Stasi (secret police) found the tunnel – one day late, fortunately. This place of remembrance is there to remind us all that freedom is not to be taken for granted. The fall of the Berlin Wall is a testament to the courage and desire for freedom of the human heart.

The Memorial is open free of charge 24 hours a day, 7 days a week.

We signed up for a Context Travel tour and learned so much from our wonderful Irish guide Finn. I highly recommend this tour! 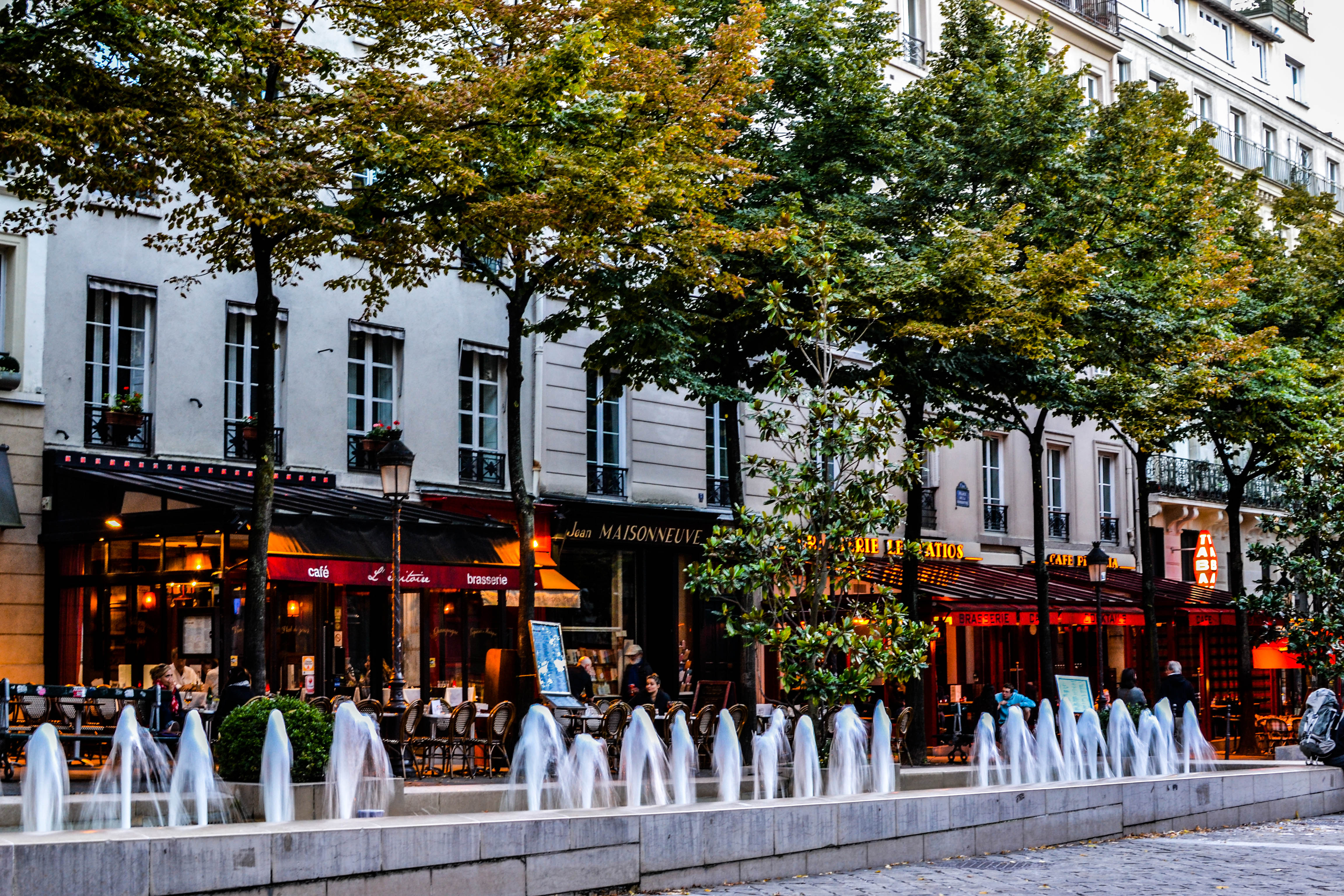 A Walk in the Latin Quarter of Paris 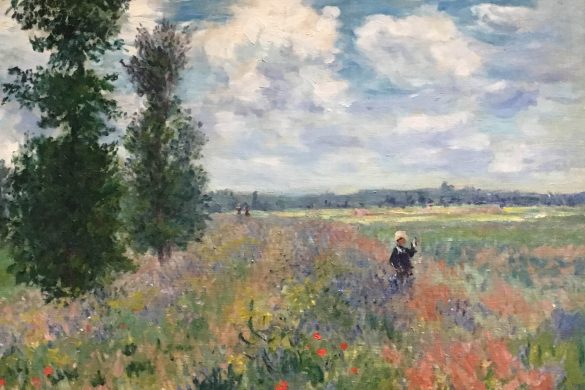 It makes sense to have a section of it in place so that people who had no idea what it was like growing up in the world with that kind of tension can come to see and learn. There is a section of the Wall here in our Canadian War Museum. It was gifted to the country after the government here hosted a multinational conference on the reunification process. As you say, on the one side there’s graffiti, on the other, blank concrete.

I haven’t seen the memorial, but I did see the wall when it iwas up! I remember looking at the guards on the other side and feeling a heavy to think that the people on the other side could not come and go as they pleased and could even be killed. My husbands family is from the east part of Germany. They escaped.

Indeed it’s a difficult part of German History. I was a child when the wall was built up, I never understood…

So sobering to think of the many ways we find to separate ourselves from each other.
Thanks for sharing this post at https://image-in-ing.blogspot.com/2017/10/wind-and-water-water-and-wind.html

Great post. I’m happy to see what is there now. I grew up in the 1950’s early 1960’s with fear of the Cold War. I remember it being built and then nightly news of death at the wall. In high school, I choreagraphed a modern dance named “The Wall” about someone trying to flee over the wall. I was elected to play the E German guard who killed the escapee. Great I said sarcastically to my 16 year old self.

Kind of frightening to think that some people have not learned anything from this and are talking of building their own wall. *shudders

When I married, I came to live in W-Berlin because Hubs worked there. Almost every weeks we heard of an escape. Visiting this part of Berlin, and you never want communism! Visit Dachau and you never want another rise of Nazism. fortunately, some very positive things were also there in that time – the battle against drugs, the revival of the Jesus people. Thank you much for highlighting in this post for All Seasons what still many of the millennials think is a fairy tale:( I wished it was!

An informative post. I have visited Berlin and found the section of the wall still remaining to be a very powerful reminder of that time.

Thanks for this post! It’s important not to forget what dreadful consequences war and fanaticism can have!

I wish we could have visited this when we were in Germany. I remember seing its fall on TV and what a powerful moment it was,

Thanks this post. Great collection.
I wish to go there, it’s so impresive city.

I really appreciate this post. I recently visited a portion of the Berlin Wall here in Los Angeles (the largest section outside of Berlin) and it was very moving, I can only imagine what it must be like to visit the memorial in Berlin. #citytripping

kid can doodle at

I bet it was very powerful and moving. Hope to see it one day. cheers

Thank you so much for taking the time to post and explain . It is really fascinating to understand this bit of history better.

Great post, such an interesting place to explore. I visited Berlin in the early 90s as a student. I’d love to return again and see how it’s changed. And we definitely all need to remember why barriers like this are not a good idea.

Context do some great tours and it’s a good way to put the wall in context by hearing some of the individual tales and examples. I am glad a section remains as a reminder too, something we certainly should not forget, when ideologies reign supreme with no thought for people. Thanks for linking up with #citytripping

Thank you for sharing such a great post! I’m heading to Germany in early December and have been hoping to visit these sites. I’ve already bookmarked it for later.

Been to Berlin for the first time two months ago and absolutely loved the Berlin Wall Trail. It’s so educational and well made. I love how they put up those poles where the wall stood so you can still imagine it being there but also see what’s on the other side. #FarawayFiles

In m case, I know I have heard about the wall (and studied it in school) but I think is going to get real when I visit the place where it stood. There is an entire different feeling when a local explain you what a place (or in this case, object) mean or meant to him. I am sure walking along is emotional. I didn’t know so many people tried to cross. Enjoyed your post as always. #TheWeeklyPostcard

I was in Berlin a few years ago and found it very impressive. It’s hard to believe what cruel things people do to eachother. #WeekendWanderlust #Travel

The thing that really strikes me about the wall and the Soviet era is that it wasnt so long ago. I think it is so important to revisit these locations to remind us of how far we have come. Thanks for sharing on #FarawayFiles

Great post – we really enjoyed visiting Berlin so much to think about. I remember when the wall came down. It is I feel important to learn from our past especially in the times we are living in.

I really love how Berlin chooses to remember it’s past for posterity.

So, this is how old I am – I spent a 4th of July in Berlin once when the wall was still up. On one side was a bunch of Americans waving flags and singing patriotic songs while the Eastern German soldiers watched us from atop the wall. Surreal. So much history in that city. It is an interesting city now. Such a mix of people and styles.

I visited the Wall Memorial a few years ago, when I was in Berlin. A very sad reminder of the communist era! #TheWeeklyPostcard

You captured the best spots of the wall – thank you for sharing. I am in Berlin again for Christmas and this post inspired me to take again a walk along some parts of the wall.

This is such a powerful place to visit and you’ve captured it well in this post. The death strip and all the information in the historical exhibits is really staggering to take in – and remember to appreciate our own freedoms. #FarawayFiles