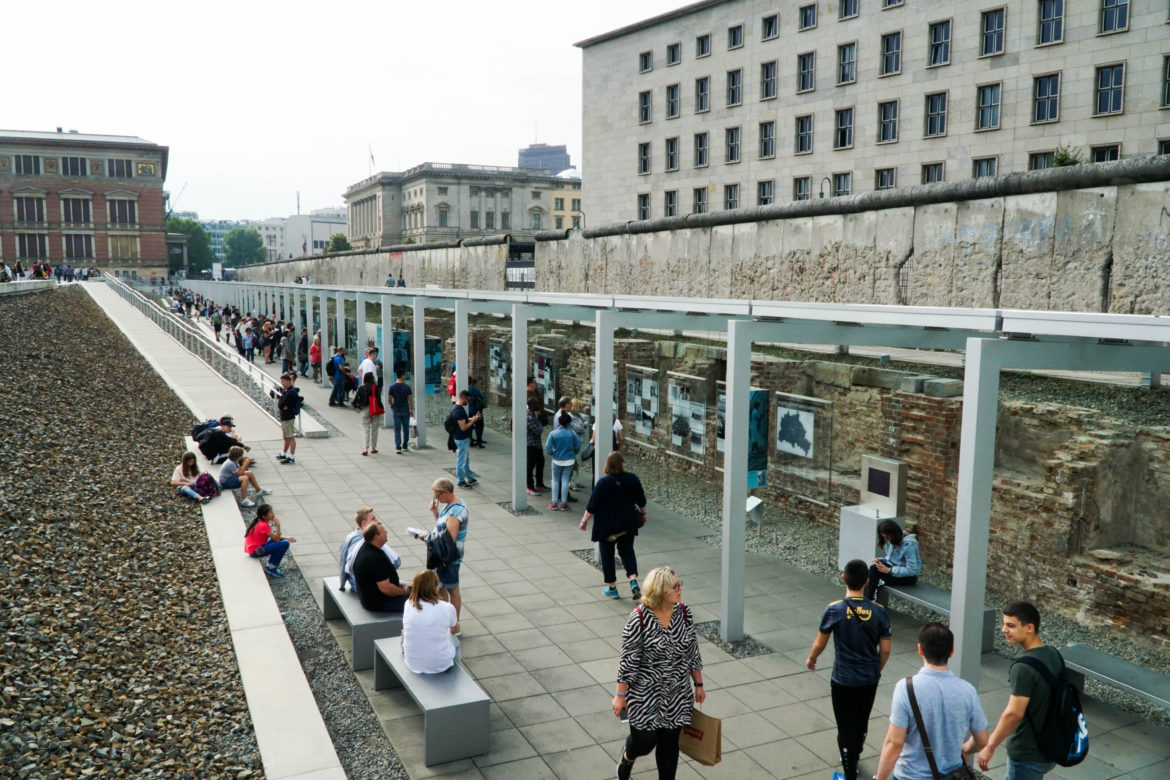 The Topography of Terror is a Documentation Center in Berlin that opened in 2010 to inform all who visit about the Nazi reign of terror. It’s an outdoor and indoor exhibit built along exposed walls of what once the site of the headquarters of the Secret State Police, the SS, and the Reich Security Main Office. As you work your way along the chronological displays outside, you see the original cellar walls.

Signs are in both German and English. It’s an excellent overview of the Nazi years in power.

Some photos need no words, though.

Inside the Documentation Center, displays portray the victims of terror, as well as setting out the events of Berlin 1933-1945.

It is amazing to stand on the very place where terror originated and where people suffered. Sad, yes. But this Topography of Terror Center is also a tribute to those who put an end to this historical terror. Berlin went from one oppressive regime to another, and the Center shows the layered history of Berlin so well. The Berlin Wall cut through this same place just a few years later, bringing a different kind of suffering to Berliners.

It’s heartwarming to see young people as well as older adults respectfully learning about this history. Not only is this Center a remembrance of so many who were victims but it’s also a way to Never Forget.

The Documentation Center is open daily 10:00 a.m to 8:00 p.m. The Center is free of charge. You can find more information about how to visit here.

Wow – so much history to take in!

I love reading your posts and your last few Berlin posts have been somber reminders of what terrors man is capable of. Thank you Sharon for being such a faithful documenter and please continue.

We didn’t go there. It’s unbeleivable we could have done something so awful, and yet seem to be heading down the same path again. Shame on us.

It doesn’t make for easy reading. You would think that the evil that happened there could never be repeated!

Even though as a European have seen these images more than once, it never becomes easy or casual:( Many of the American Millenials should see this – it would change their attitude about certain things. Cannot thank you enough Shoron for the guts to post these things! I’m not stuck in the past, but it would be foolish to know, forget, and go through it again! Appreciative of you sharing this with All Seasons! Have a beautiful week!

This is such a moving post. My heritage is German (although my ancestors left Germany well before Hitler came to power). As such, I can never stop wondering what role I would have played. I like to think I’d have done the right thing, but the fear of what would happen to those who did not cooperate with the regime was fierce.
Thank you for sharing at https://image-in-ing.blogspot.com/2017/11/moonlight-and-sunrise.html

Look, if you like, we had an exhibition here in Augsburg
http://www.timbayern.de/ausstellung/sonderausstellung/

That is an amazing amount of frightening history to take in. I had no idea such a place existed. We all need to visit to prevent this from happening again… Thank you!

It is so difficult to look at these photos knowing that these horrific acts took place not so long ago and for some of us in our lifetime.

I remember visiting this back when I was 17 and being shocked! It left quite the impression on me and when my husband and I make it to Berlin one day, I would definitely show him this museum! #CityTripping

I love how Germany is holding itself accountable instead of pretending it never happened. My husband said as he grew up he never heard much about WWII and wasn’t until he moved to the U.S that he learned all the stories, but that is changing now.

Great post. We always need to remember the past so we don’t repeat it. Thanks for sharing these shots.

We visited this museum last year, and I found this museum quite difficult to process. The use of propaganda was terrifying, but the museum is a good reminder to not relive the past. #FarawayFiles

Gosh I bet that was tricky to be there, bt it is so important to see. Thanks for linking up.

I visited the Topography of Terror myself just a few months ago and I was at a loss of words. It is so hard to stand at that exact place where all those horrible things happened but still the exhibition is so well made. Totally agree with everything you sais and recommend everybody to visit when in Berlin. #TheWeeklyPostcard

I can imagine it was a fascinating experience to wander the very grounds. And a mix of feelings as like you say it’s a reflection on those who made terror happen, but those who made it end as well. Thanks for linking up with #farawayfiles

A very sobering experience and incredibly important exhibition. You’re right, some of the photos say it all. Thanks for linking #citytripping

I can’t believe it’s been so long since I visited Berlin – when I was there, this exhibition wasn’t even up yet! It’s to important to remember this part of history, unpleasant though it may be, to keep ourselves from repeating the same mistakes. Thanks for sharing!

An important, if harrowing, museum. That photograph with the boy…