In the center of Switzerland, lovely Lucerne is a city that offers beauty and history and art. Sitting on the edge of Lake Lucerne, with a panorama of mountains in the background, Lucerne is a place to relax and leisurely stroll from one highlight to another. As it’s on a main trainline through Switzerland and only a 30-minute train ride from Zurich, it’s easy to devote a day to exploring Lucerne as you zip about Switzerland or Europe.

We spent a day walking around the city and enjoying every minute. I’ve also visited for a day and spent my time on a boat on the lake and then venturing up to Mt. Pilatus. Your decision on how to spend a day will depend partly on weather. If it’s cloudy or wet, the experience of ascending to a mountain with a socked in view may not be worthwhile. Or if you’re partway into a European trip and would welcome a day to find interesting sights at an unhurried pace, you could choose to spend your time in the center of the city.

Here’s what we found on my last visit. We arrived by train from Heidelberg late in the morning, so our hours were limited. We decided not to try to fit in Mt. Pilatus but to hang out in the city center. I’ve included information on Mt. Pilatus at the end of the post, as that is popular. Whatever you do during your day in lovely Lucerne, I sure you will be quickly reeled in by its charm and picture book scenery.

Walk Through the Chapel Bridge

The Chapel Bridge and its water tower are the landmark of Lucerne.

Right in the heart of the city, this diagonal bridge connects the north and south banks of River Reuss. Built in the 14th century, it’s thought to be Europe’s oldest covered bridge. With its hanging baskets of bright-colored flowers and the trusses set in the river, it’s quite picturesque.

The water tower is about 100 years older than the bridge. It’s served as a lookout tower, a treasury, and a prison. 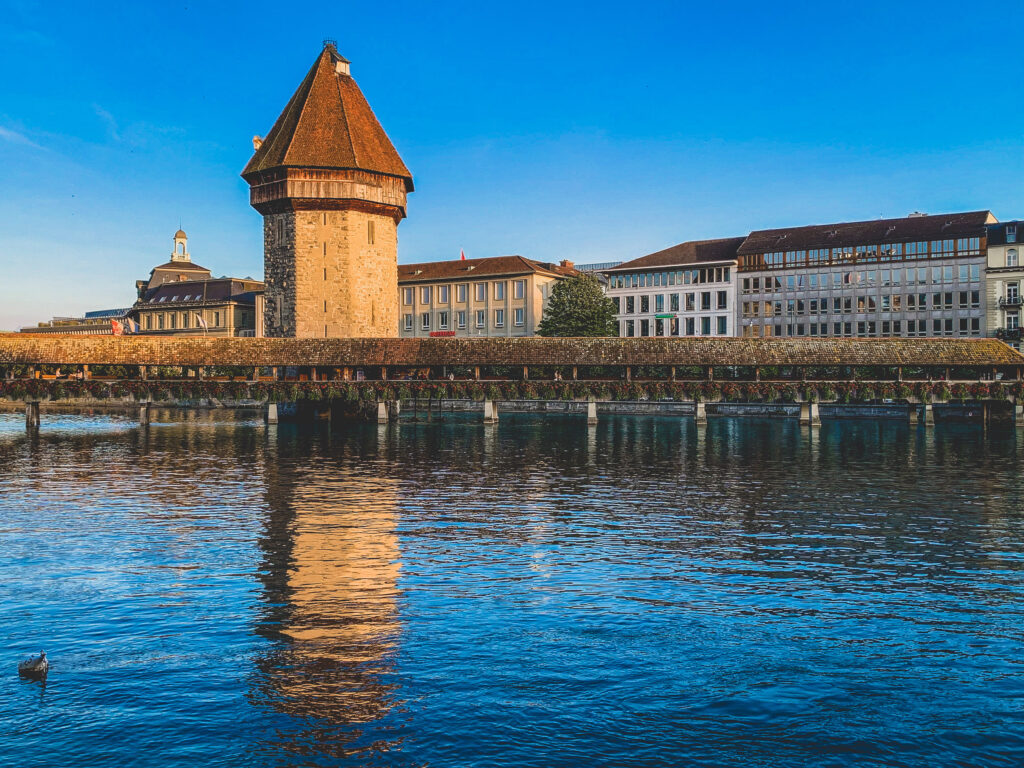 In 1993, Chapel Bridge suffered a major fire. Only the tower and ends of the bridge survived. The devastation of this icon of Switzerland so moved people that funds were collected, and the bridge was restored about a year later.

Take time to climb the few steps on the bank and enter the bridge. Walk from one side to the other. Look up at the painted panels set into the ceiling. These date from the 17th century and depict scenes of Swiss history. And stop frequently to admire the view of the lake and mountains from inside the bridge. Pay Respects at the Lion Monument

This world-famous stone carving surprised me with both how beautiful and how emotional it is. And the Lion of Lucerne is much larger in real life than it looks in photos.

The dying lion pays homage to the Swiss Guard heroes who died in Paris. In 1792, the Swiss tried to protect the life of King Louis XVI, but they were all killed when revolutionaries stormed the palace.

Admire this sculpture from different angles and think about those who gave their lives in a country that wasn’t even their own. As the American writer Mark Twain wrote: “The Lion of Lucerne (is) the most mournful and moving piece of stone in the world.”

Next, we walked through residential streets to find the Musegg Wall, the historic fortification that protected the city since its founding in the 1100s. The current wall dates from the 1400s and features nine watchtowers.

Enter by stone stairways and make your way along the walkway between the edges of the double wall. Have fun stopping at the towers to go inside. The portions of the wall are at different heights, so you can look down (way down!) from the higher elevations onto other sections.

The Zyt Tower, my favorite, houses a large clock attached to a bell for chiming out the time. The bell still strikes, and it’s very loud if you happen to be in the tower then!

And of course the views from the wall are breathtaking.

Venture to the Spreuer Bridge

This is Lucerne’s lesser known covered bridge. While it’s shorter and plainer than the Chapel Bridge, it also crosses the River Ruess and it’s worth seeking out.

This quaint footbridge, built in 1408 formed part of city fortifications. The paintings in the gables represent the “Dance of Death” and date to the 1600s.

As you cross the bridge, imagine the days centuries ago when locals brought chaffs of wheat here and tossed them into the river. Also, notice the locks of the river on the side of bridge; they form a “waterfall.”

A plus of the Spreuer Bridge is that it is not as well known and won’t be as crowded as the Chapel Bridge.

Buildings in Lucerne will delight you with their painted facades. You’ll find poems as well as historic figures on display. You don’t have to go looking; they are all over the city center.

Enjoy at least one meal sitting in a café along the water. While we ate lunch at a little restaurant on a side street, we chose to have dinner outside on one of the many restaurants lining the shore. Yes, it’s touristy, but do it anyway. You’ll always remember this! I can highly recommend Da Ernesto for a scrumptious Italian dinner.

Savor Sunset on the Lake

Go back to the Chapel Bridge and the water’s edge for a stunning sunset. You may see the light on the mountains as day fades to night. Twinkly lights come on, and lovely Lucerne becomes magical.

And if you have more time …

Ride a Cogwheel Train and Gondola at Mt. Pilatus

If you have at least half a day for this activity and the weather cooperates, a visit to Mt. Pilatus will be a memorable adventure. On a different trip to Lucerne, I booked a boat ride on the lake, then set out for Mt. Pilatus.

The journey begins with a 30-minute ride on the steepest cogwheel train in the world. As you gain altitude, you are soon far above Lucerne. At the top of Mt. Pilatus, you can choose to hike or embark on various adventurous activities.

Descend the mountain via the Panoramic Gondolas, as you enjoy views of the lake and Lucerne.

The official website offers more information on planning a visit to Mt. Pilatus.

If you are flying in or out of Zurich, or if you are crisscrossing Switzerland, plan to include at least a day in Lucerne. I almost booked a nondescript hotel in Zurich near the airport because we were flying home to the U.S. the next day. I’m so glad I booked a night in Lucerne instead. The train from Lucerne to Zurich stops right in the airport, so it was easy to get to Zurich and check in for our flight the next day. And we were able to see so many sights in just a few hours in lovely Lucerne! What a gorgeous pace to explore!!

Gorgeous town. Great tips and info. Will oin it and save for my future travel. Lovely pictures. Thanks for sharing 🙂

I would love to visit Lucerne one day, it looks like such a beautiful city. I love the bridge, so many details on the panels from the ceiling. Incredible they still stand, from the 17th century.

Your pictures never disappoint! Lucerne looks so lovely. I think I could spend the whole day wandering around looking at the facades.

Ahh Switzerland never fails to amaze me These photos are absolutely stunning & Chapel Bridge looks so gorgeous! Saved for when I FINALLY get to visit!

I almost booked Lucerne for an anniversary break with my husband and now I’m regretting it.

This is such a beautiful location and your photos are amazing!!! Can’t wait to visit one day! Thanks so much for sharing!

I cannot wait to visit Lucerne, and this guide will definitely help me out!

I have a friend who lives in Geneva so we took the longer train ride for a day trip to Lucerne a few years back. We didn’t have much time, but I remember Lucerne being so beautiful. I love all the gorgeous buildings with the paintings!

This looks like such a beautiful place to visit! I love your photos + really hope I can come visit here someday!

I loved Lucerne, and your photos are amazing! Those views of the mountains at sunset are stunning! Lucerne, and Switzerland in general, is a wonderful place to check off the bucket list!

The view from the bridge is absolutely breathtaking! It literally looks like something out of a painting. How amazing!

Love Switzerland! It’s so beautiful. I didn’t get to explore Lucerne, so I most definitely will have to go back and check out these places! Thanks for sharing <3

Gorgoes. Love the pictures. I cannot wait to visit. Great article. Will save this for my reference.

I would absolutely love to get to Switzerland! Your photos are gorgeous, I can’t imagine what it is like in person!

I haven´t been in Lucerne yet, but your pics and descriptions make me wanna go immediately! Who knows, I still have a vacation planned in November! And I still need to choose an alternative destinations…