The Royal Air Force Museum London gives you much to explore, with more than 100 aircraft dating back to WWI on display. The museum is on the site of a former air field, and you can visit several huge hangars to see different displays. In our morning there we were engrossed with the historic displays of two of these hangars. I’d love to go back for another visit to see what we missed!

We started in this hall. Early planes are interesting and sometimes baffling.  Why is this man standing up, not holding onto anything as he flies through the sky? 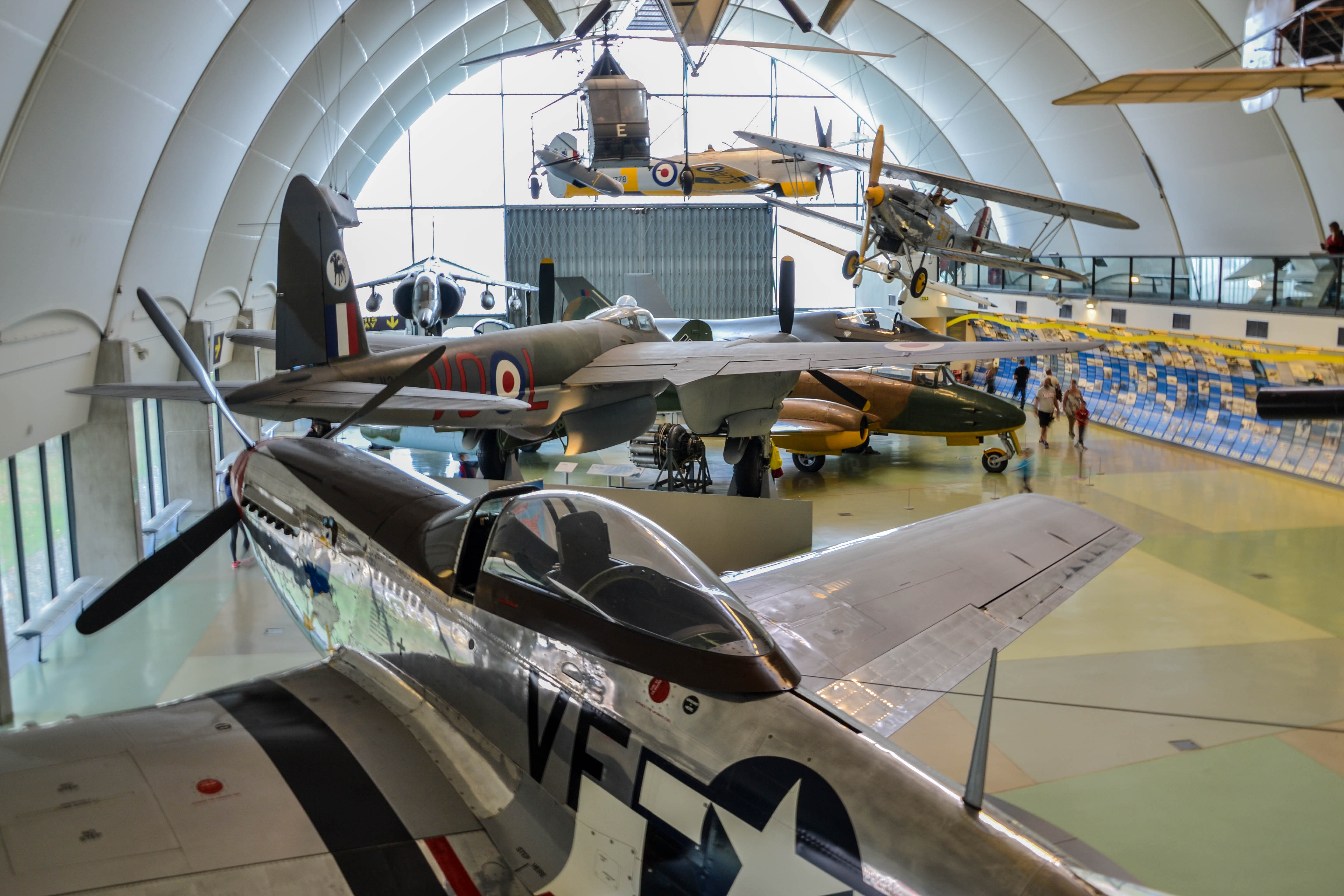 A timeline on the ground floor is an easy way to learn about the history of flight.

Many of the planes here are WWII era. You can view them from a high deck, and then you can go to the ground floor and look up at them. You can almost feel them in flight.

The Mustang is a well known fighter plane of WWII. The museum guidebook attributes its design to “British specification, American Design ingenuity, and a Rolls-Royce engine.” It was famous for being able to defend Allied bombers all the way to Berlin and back.

This Hawker Tempest was used for towing targets in the war.

The German Messerschmitt Me262 boasted a revolutionary new jet engine. The air war rose to a new level of conflict when this plane first appeared in 1943. By chance, a Jewish family stood on the upper deck looking at this Nazi plane, with the father obviously telling his children a story about it. This gave me chills.

First World War in the Air

Next we went to the intriguing World War I exhibit. The hangar housing this collection was built by aviation pioneer Claude Grahame-White during the war in 1917. It’s amazing to think that only eleven years after the first powered flight, aviation became a central part of the war.

Our delightful guide insisted that my husband don a leather helmet to get in the spirit of the tour.

Here we saw a Sopwith F.1 Camel, the highest scoring British fighter of this war.

Time for lunch? A cafeteria-style restaurant will provide something for everyone in your party.

The Royal Air Force Museum London is an easy 30-minute ride from Central London to Colindale on the tube. It’s open daily from 10:00 a.m. to 6:00 p.m. Admission is free.

Once you visit and see even just a part of what’s here, you’ll probably want to return to see more of this excellent, informative museum. 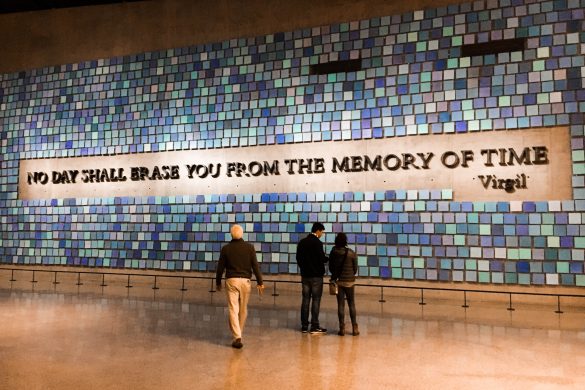 I love this display, Sharon! So that is why the Mustang was so famous – the Rolls Royce engine! A great detail to know. The only Air Force museum I have seen is the air carrier in San Diego – you probably have seen that one. This one in London goes much further back – so interesting!
Many thanks for taking us with you on this historic exhibit for All Seasons:) …including the leather helmet your hubby had on! Have a great week!

Such a fun place for exploration. Thank you for linking up with through my lens.

Wow! Those are so awesome!!

Looks fun! My boys would love it.

Terrific museum. We were there a few years ago with the kids. Glad you enjoyed your visit.

Fantastic museum! My husband would love this! We’ve visit the Air & Space Museum in D.C. several times. This looks as great. What a wonderful post!

These are marvelous images – such beautiful vintage planes!!!
Thanks so much for linking up at http://image-in-ing.blogspot.com/2017/08/ready-to-go.html

Wow! I some how missed this adventure in London ~ so glad to see your wonderful photos and post ~ fascinating ~ thanks, ^_^ ~ Love the pic of hubby in the flight cap ~

An interesting Post, I enjoyed reading. Wonderful for Image-In-Ing on Tuesday.

Super cool. I want to go. What a cool place to visit. Thanks for sharing.

It looks a good day out. Pleased but surprised to see that it is free.

So much to see! What an awesome place for photos and to learn a little history, too. Thanks for sharing!

I’m such a nerd for these things. Not in the way that I know all the details about these planes, but I do love looking at them and finding out interesting tidbits that I didn’t know before! #WATW

Seriously so cool! Thanks for sharing!

My husband would love this museum. He loves planes and even wanted to become a fighter pilot when he was younger. I would enjoy it because of the WWII history, though I’m not as into planes as he is. #FarawayFiles

I’ve heard great things about this museum. After reading your post, I’m sure I would love this museum. It is on my bucket list for the next visit of London. 🙂 #FarawayFiles

Looks very interesting Sharon! Have to admit I am not a big fan of places like this but my husband enjoy them a lot (and he is not a fan of museums at all). We have been to some in the LA area and the experiences have been good. I am sure my husband would like the variety in here. #FarawayFiles

I just love that museum. My dad used to work in aviation for 30 years and planes was all we breathed, groing up. Those old planes are simply beautiful. Thank you for the tour, great photos.
#TheWeeklyPostcard

This looks really fascinating. So interesting to see these and compare them to the planes of today. It’s also so nice that it is free, definitely worth the visit. Thanks for sharing on #TheWeeklyPostcard.

What a great building to house these museum pieces, it looks so light and airy with great displays. #TheWeeklyPostcard

Wow! I’ve spent a lot of time in London but this is my first time hearing about the Royal Air Force museum! (embarrassing to admit though it is.) Sounds super interesting and right up my alley – I loved the Space and Air Museum in Washington DC! Pinned 🙂

Also a sobering reminder of how good humans are at weaponising inventions and the human cost of wars. (Very relevant in this day and age, if only the right people would listen and learn from history!)

It looks like there is so much to see there. I’m amazed that it is so large and yet free. Very nice photos of the planes too.

My husband loved this museum so much! We visited in winter so it was quite windy and cold outside but the main hangar kept us entertained for ages. The kids loved running through the Concorde! Thanks for joining #FarawayFiles

Looks like a really amazing museum my husband would love! So awesome that admission is free! Thanks for linking up with #TheWeeklyPostcard!

If you get bitten by the aviation bug, the RAF museum at Hendon is only one of two amazing museums. The sister site is at RAF Cosworth just northwest of Birmingham. Even bigger is the Imperial War Museum site at Duxford, on the way to Cambridge. Then one of my favourites is the Yorkshire Air Museum outside York, and in Scotland, the National Museum of Flight just east of Edinburgh. Those are the main ones, but there are dozens more.

Yes, we are bitten! We are heading to London this May and plan to spend a day at Duxford. Thank you for your other suggestions. I’ll keep them in mind for future travel planning. Near my home in Southern California, there is the Palm Springs Air Museum with quite a collection of WWII planes.