With the movie “Dunkirk” exploding on the screen this week, it’s a good time to learn about the Churchill War Rooms in London. From this underground bunker of offices, Prime Minister Churchill and his staff planned WWII. This would include the Miracle of Dunkirk, when civilians with any kind of boat were requested to cross the channel to France and rescue the stranded Allied soldiers. The British responded in great numbers, and more than 300,000 soldiers were ferried on fishing vessels across the channel to arrive safely back “home.”

Churchill became Prime Minister in May of 1940. By the beginning of June, 400,000 Allied troops sat on the beaches of Dunkirk, pushed to the edge of the water by the Germans. Today, historians look at the successful evacuation of these soldiers as a turning point toward Allied victory. The British army was saved instead of captured. The U.S. took notice and immediately started sending supplies to Britain.

A tour of the War Rooms takes you along the hallways where the English planned their strategy. The offices look just as they did in the 1940s. 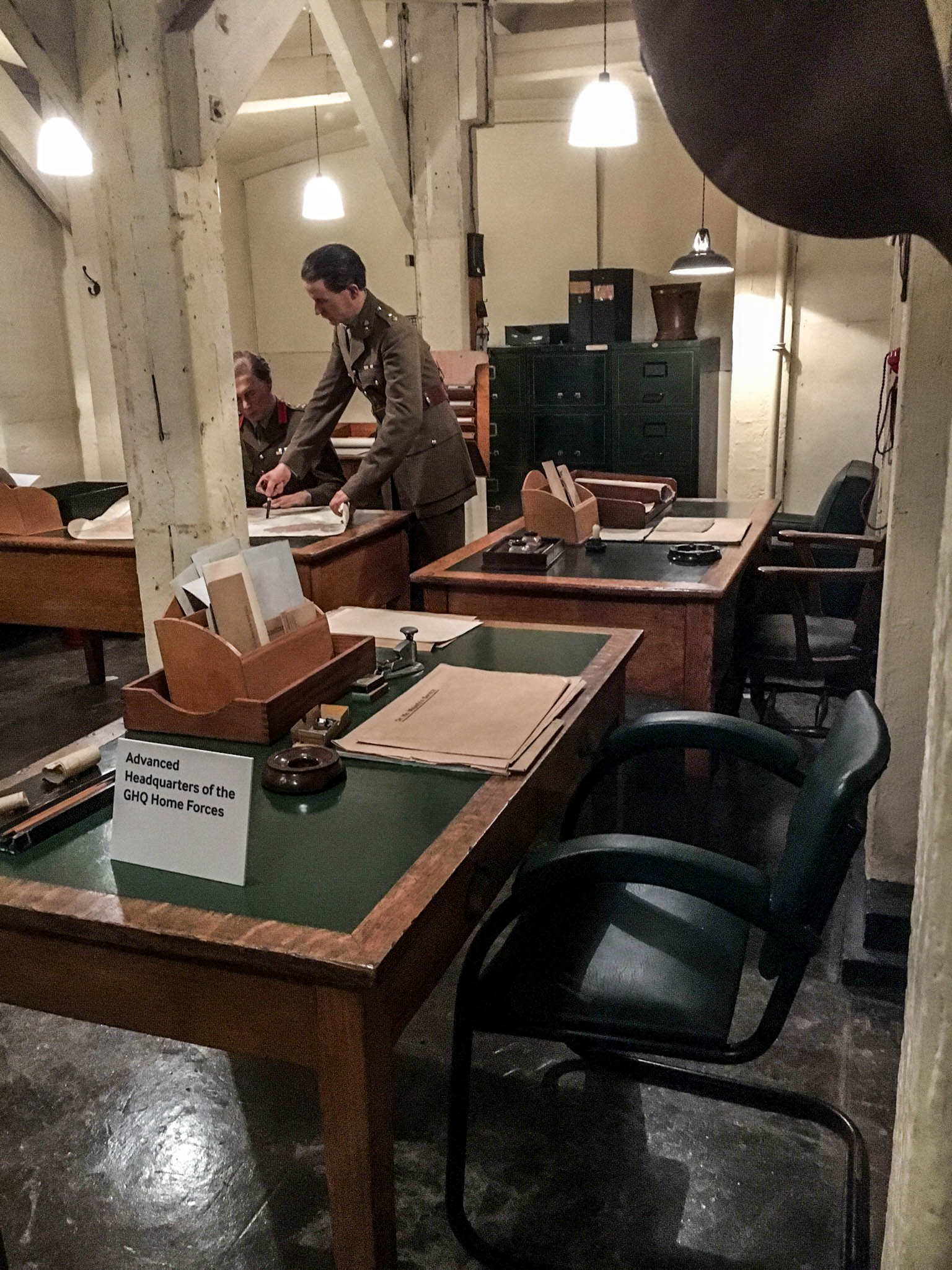 Churchill often worked 18-hour days. So he had a room to stay in the bunker. His wife also had a room here, as did his staff.

A museum on the life and work of Churchill is now in the building, next to the War Rooms. It’s a well done museum telling of an eccentric leader. He wouldn’t allow his staff to whistle, for example. And he took a nap in the afternoon, making it clear he was not to be disturbed.

The real heart of the bunker, though, is the offices where the planning took place. My favorite parts of the War Rooms are the maps that show with stick pins and string the plotting of troop movements. No digital info in those days!

After Dunkirk, when more than 800 boats made the harrowing trip across the channel and back with the stranded military, Churchill inspired the Allies with these words:

The War Rooms were used throughout World War II. It amazes me that they were left for years as they were on the day the war ended. They were opened to the public in the 1980s. So you and I today can walk in the steps of the war leaders and imagine that dark and uncertain time.

The Churchill War Rooms are under the Treasury building in the Westminster area of London. The building itself looks like any other office building. The treasure lies underground and is well worth a visit if you’re anywhere near London.

The nearest tube station is Westminster.

Here’s the official trailer for the movie “Dunkirk.” It’s an awesome film that puts you right into the midst of the battle. I highly recommend it!

I really love this post Sharon. This is the kind of place I look for in most cities I visit. The history of WWII always remind me of my mother and father. He spent 18 as superintendent of a ship building yard building ships after Pearl Harbor. He only went home every 2 to 3 days and slept in his chair at work. Tough times.

This would be a movie Hubby would like to see – so much history!. Many people could thank Churchill – not liked in his time, but a man of action! Thanks for alerting All Seasons, Sharon! – Duinkerken -just a few hours South of where I grew up as a child…

Oh wow – this would be amazing to see in person! Thanks for sharing with us!

this looks like a fascinating place to visit. I’m looking forward to seeing the movie Dunkirk. Happy travels, and thank you for stopping by my blog last week.

I have to see this movie! Need to see when it is playing here in Germany. How fun that you got to go to the war rooms. We named our son after Churchill. He was such a great statesman.

This has been on my bucket list for quite a while. Think I need to plan a trip to London!

Such intersting insight into this piece of history. Thanks for linking up with Through My Lens.

You have captured the main areas of the war rooms really well. It is a place we worth visiting.

A Shutterbug Explores at

A place I know we would have to see! We love history so much, and WWII is fascinating. Loved your detailed post. We are also looking forward to seeing the movie.

Wow… I enjoyed this Post again for the Tuesday theme IMAGE-IN-ING.
HEIDRUN

Fascinating, Sharon.
Thankk so much for joining us at http://image-in-ing.blogspot.com/2017/07/hhhhiiiiiiiisssssssss.html

Now that is a place I want to visit superb

Ah Sharon, the Churchill War Rooms are within walking distance of our house and I still havent been. My husband would love this and your post is a great reminder to get him to go. Thanks for joining #FarawayFiles

We took our kids to visit family friends in England when they were teens. We let them each choose something they wanted to do and my WWII buff son chose Churchill’s War Rooms. It wasn’t high on my list – but I’ll tell you that I thoroughly enjoyed it – and learned something to. I’d highly recommend it!

Thank you for the post! So interesting. Churchill was definitely an interesting leader. The best GB could’ve had for WWII, though he also made some world-altering decisions in his day. I am so putting this museum on my list for my next London visit.
#TravelPhotoThursday

I’ve heard that this place is brilliant. I know my son would love it. We recently went to the Imperial War Museum which was also fascinating. #farawayfiles

I had heard about the Churchill War Rooms before but didn’t really know what it was. It sounds really fascinating and I guess I need to get out and see the movie! Thanks for sharing on #TheWeeklyPostcard.

Wonderful post, and so timely! I’ve not made it to this yet, but plan on it next time I’m in London! #farawayfiles

I definitely want to see Dunkirk and I have wanted to visit the Churchill War rooms forever but haven’t made it there! Next time I’m in London!! Thanks for linking up with #TheWeeklyPostcard!

I have a fascination with World War II and I would definitely love to visit the Chrchill War rooms. Maybe this would be a good reason to return to London. Thanks for letting me know about “Dunkirk”. I want to watch it. #TheWeeklyPostcard

We visited the Churchill War Rooms when we were in London last summer. I agree that it’s fascinating that it was kept frozen in time for long. Great photos and details of your visit there.

It’s great that these war rooms have been kept as is. It’s quite intriguing. Thanks for linking up with Travel Photo Thursday.

What a great museum. Obviously such an important time in world history, it’s good to see it preserved for the generations. We’re definitely looking forward to seeing the Churchill War Rooms! Thanks for sharing on #TheWeeklyPostcard

It blows your mind to think of the decisions and activities that took place here. My husband has been wanting to visit here for years – so we’re planning a trip to London and will reserve tickets to make sure we go this time around.

We saw the Churchill War Rooms when were in London last year. What a fascinating museum! I highly recommend it to anyone visiting London.