Budapest offers much to explore. Our two days there went so quickly. We did cram a lot in, though, and I want to inspire you to visit this intriguing city by showing you some of its charm. As I think back on our time in Budapest, what most impressed me was its beauty. Rather than any one building or castle lookout, central Budapest as a whole will take your breath away because it is simply beautiful. Here are a few reasons.

Architecture – A Blend of Cultures and Styles

In its long history, Budapest has been invaded at some time by Celts, Romans, Turks, Habsburgs, and German Nazis. After World War II it fell under communist rule by the Soviet Union. A rebellion in 1956 was swiftly put down. Budapest finally broke free in 1989 with the collapse of the Iron Curtain. It is now part of the EU, but parts of the city are frozen in the past. All of this back and forth contributes to the style of architecture, which clearly shows that Budapest is a blend of Eastern and Western Europe.

The most famous example is the Houses of Parliament, built from 1885 to 1904. This Neo-Gothic and Baroque building is topped with a high red dome. It boasts 233 statues, 27 gates, 10 courtyards, and almost 700 rooms.

Parliament is on the Pest side of the Danube River, and across from it, on the Buda side, is the Buda Castle. Hungarian kings have  ruled from here since 1265. The Baroque Royal Palace there today, finished in 1769, takes up a big part of the castle grounds. You’ll also find meandering medieval streets, quaint shops, and cafes. Dominating the area is the renowned Matyas Church, with an impressive mosaic tiled roof, and Fisherman’s Bastion, which is the part of the medieval wall that was maintained by the Fisherman’s Guild. Wander around here and you will think you’ve been transported into a fairy tale. 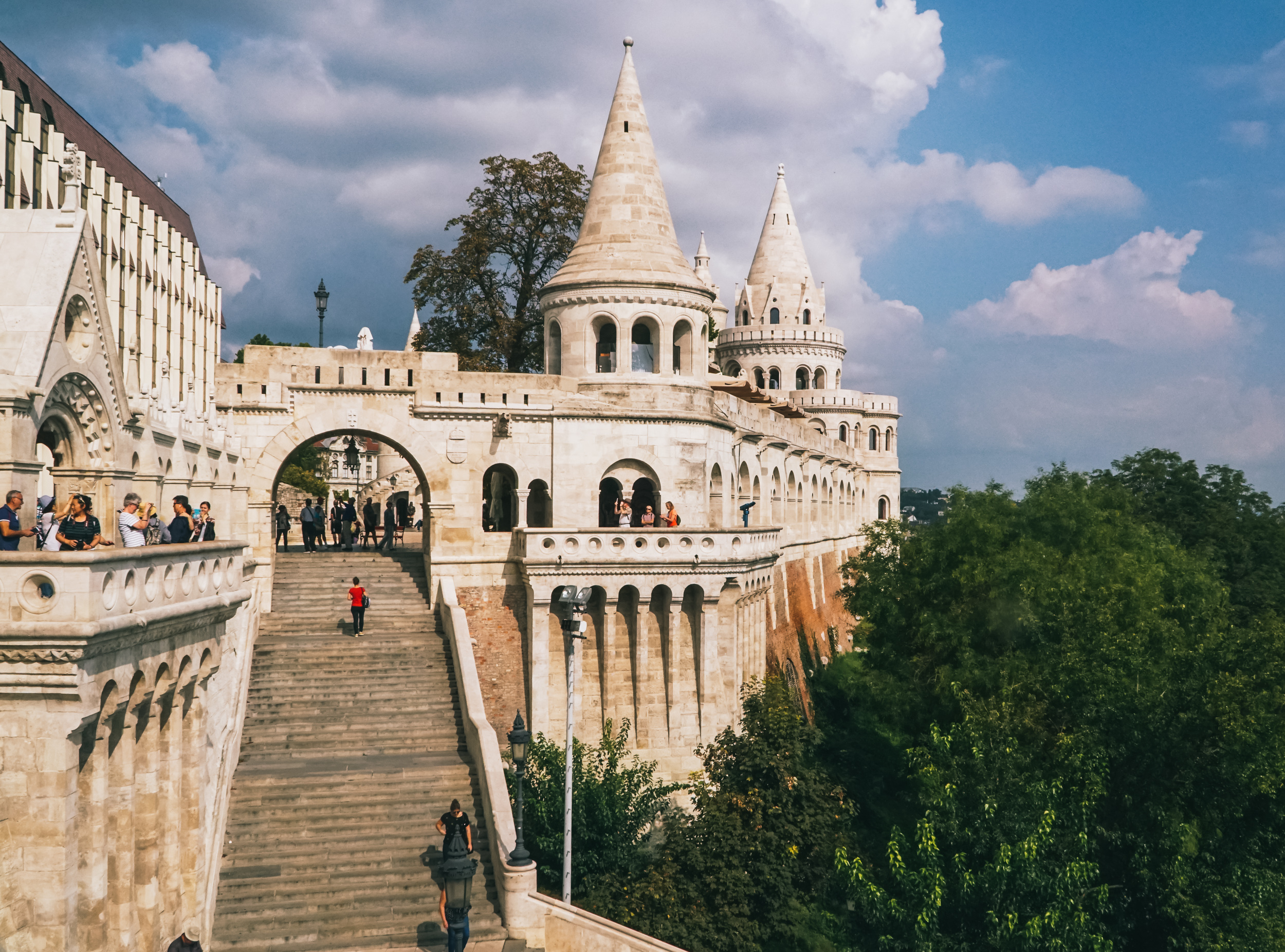 The Danube River flows between Buda and Pest, lending its beauty to both halves of the city.

All of the bridges connecting Buda and Pest were destroyed in World War II and have since been rebuilt. The most well-known is the Széchenyi Chain Bridge, a suspension bridge originally built in 1849 and named for the Hungarian Count who prompted the construction.

The Liberty Bridge is another lovely bridge across the Danube. Built in 1896 for the Millennium World Exhibition, its reconstruction is bright green. It’s striking against the blue Danube.

From the lions guarding the Széchenyi Chain Bridge to random tributes on street corners, sculptures populate Budapest at every turn. Here’s a sample. 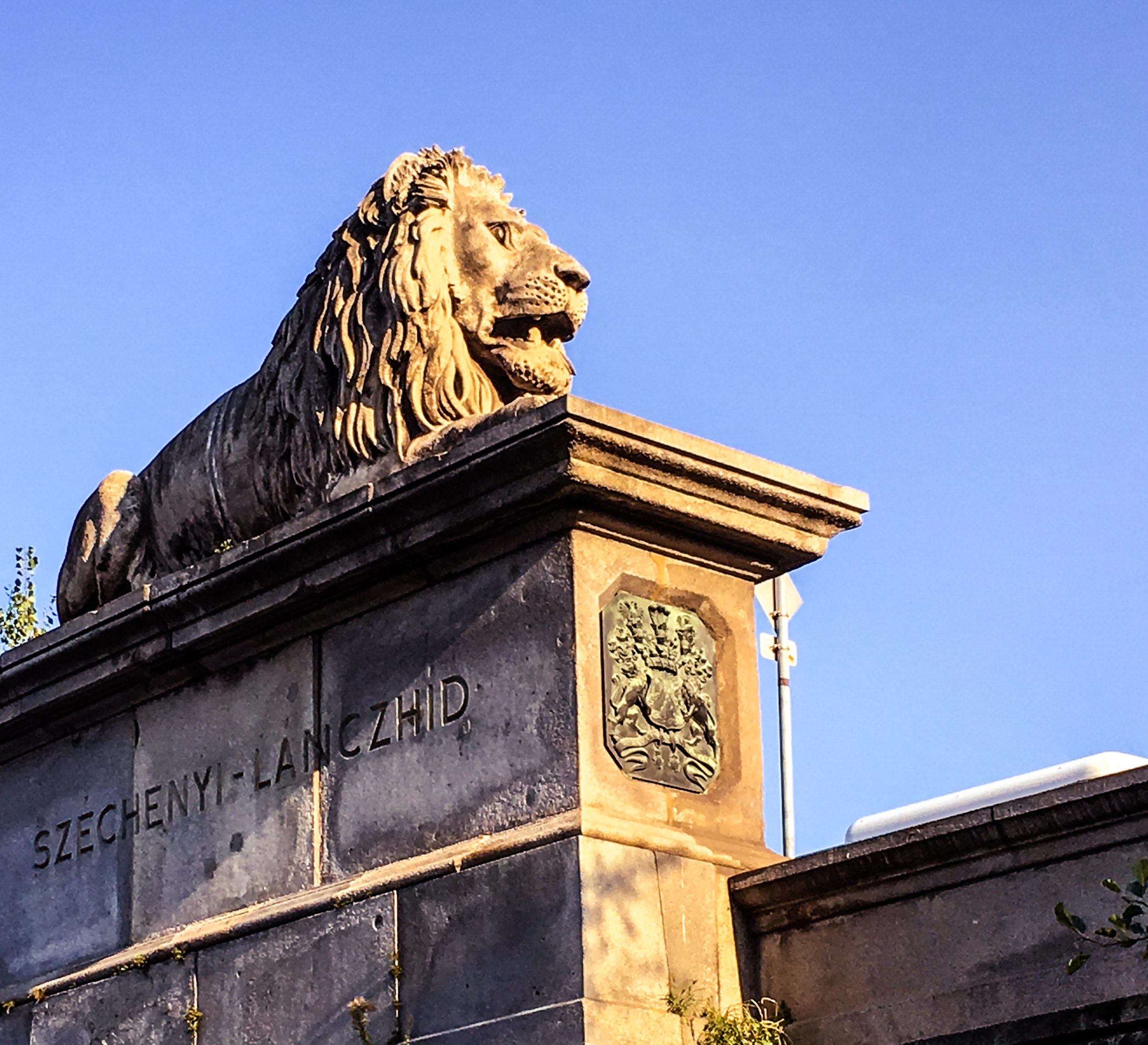 Put together the architecture, the Danube, the bridges, and the art and you have Budapest – an amazing blend of cultures. I can’t imagine ever growing tired of exploring here.

How about you? What place has captured your heart with its beauty?

The Castle District of Budapest 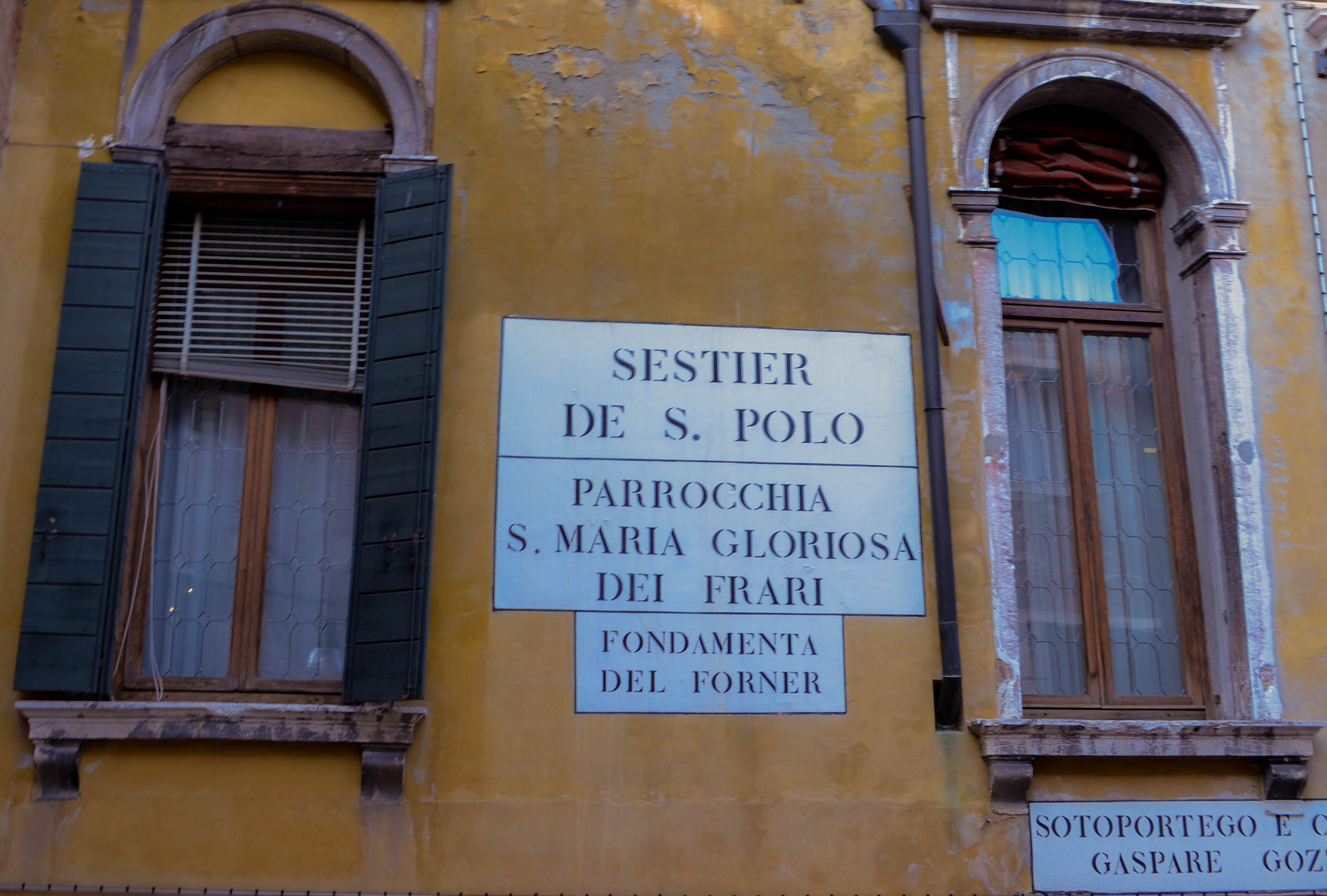 Walking a Narrow Path in Venice

Fantastic pics!!! I was in Budapest a number of years ago. Your photos bring back fond memories!

So many beautiful buildings – wonderful place to visit!

amazing looking city. I’ve not been since I was too young to appreciate it!

Your photos brought back memories of our 2016 river cruise that started in Budapest a headed upstream. Hope to return some day and go downstream on the Danube.

What an exquisite experience it must have been. I wanna go too.

Your pictures are stunning. Budapest is on my list of Eastern European cities to visit! #citytripping

I never seem to get around to visiting Budapest, even though I want to. So much to do 🙂 #citytripping

I loved Budapest! Such a gorgeous city!!

YOu got some amazing photos! I want to go for their music festival one year #CityTripping

That’s the next city on my travel list ! I have been on a tour around the Northern countries and published today “Riga”. These eastern countries have such a rich and beautiful architecture !

What beautiful architecture! I have friends that recently came back from a river cruise that ended in Budapest, and it sounded like a wonderful way to see the city.

When Budapest was behind the Iron curtain it was the most welcome of all capitals:) Aw well as beautiful
Thank you for sharing it with All Seasons, Sharon! And thank you for the pleasant memory of good food too:)!

Fascinating to see how the history of Budapest is reflected throughout the city in its architecture. The Parliament building is gorgeous, although it does make me a little sad to think of how this area was constantly overtaken by other countries. It gives you a deeper reflection on how cultures can clash, interact, and merge all at the same time. #citytripping

I think Budapest is one of the most stunning and mesmerizing cities I have ever visited. It has so many different ‘faces’ too. Loved it the both times I was there. I highly recommend going in the middle of winter, when it’s snowing but you can still soak in those warm baths, oustide, while snowflakes fly around your head!
#WanderfulWednesday

You’re right – Budapest looks gorgeous. One of my co-workers visited last year and he said it was one of the most beautiful places he’s ever been. It’s definitely on my list! I felt this way about Rome. It seemed every little alley we turned down, there was some beautiful statue or building. I love that about Europe.

It looks like the most beautiful city with all that blended architecture. I haven’t been but I can’t wait to go one day.

It looks like a wonderful place to explore. So many incredible buildings and bridges. I am happy to see that the Danube is indeed blue 😉
#FarawayFiles

Cristina - Memories of the Pacific at

Your photos of Budapest are wonderful, Sharon! I’m Pinning this post because I’m visiting Budapest next spring 🙂

I have wanted to visit Budapest for a while now, and your trip as definitely inspired me to visit more, so you have done what you set out to do! I want to visit for all the reasons you have mentioned, the history, the architecture, it just seems like such an interesting place, pinned for when I eventually get there! Thanks for sharing #feetdotravel

Budapest is so beautiful and I am different photographer today than when I first visited. I’d love to return in warmer weather and mostly focus on an architecture tour. #FarawayFiles / #FeetDoTravel

It’s such an interesting place architecturally and you’ve captured it so well in your images – which are beautiful!

My youngest son has to go to Budapest for a skating competition. After reading your post I don’t mind escorting him. #FarawayFiles

Budapest has been on my travel list for ages, I want to go even more now, after reading your post. Thanks for sharing #farawayfiles

Your photos are stunning, I love your point of view, and after reading this post I am definitely convinced that I need to put Budapest on my list. Thank you for sharing on #farawayfiles

I have yet to make it to Budapest, and your post and photos are enticing me to go asap! It looks like an amazing city!

Lyn aka The Travelling Lindfields at

I have great memories of Budapest. We once stayed in a hotel room with a view overlooking the Chain Bridge. It was stunning.

My parents had travelled to Budapest many years ago and they had mentioned that I shouldn’t miss this city if I were to travel to Eastern Europe some day. Your photos are simply spectacular- my favourite is the image of the Parliament by the Danube River 🙂 #FarawayFiles

Wow! You have certainly showed the beauty of Budapest through your fantastic photos. Simply stunning shots.

So glad you had a great time in Budapest, Sharon. Since my brother lives there (and I’m Hungarian), I visited the city often… You captured some of the most beautiful places in the city, your photos are amazing!

Budapest is very dear to my heart. My husband is Hungarian and we have many friends and relatives there. I can’t get enough of this beautiful city, no matter how many times we go. Thanks for reminding me how beautiful Budapest is! #TheWeeklyPostcard

City Travel Inspiration – #CityTripping 132 - Have Kids Can Travel at

Faraway Files #97 | oregon girl around the world at

[…] The Beauty of Budapest | Photo and Post by Exploring Our World […]

As always I absolutely love your photos. I have only been to Budapest once for a few days and was surprised at the time by how much I loved it! I was excited to visit but had no idea that the city would steal my heart the way it did. I would love to go back someday. #farawayfiles

BEAUTIFUL, Sharon! What a lovely city!