First used as a burial place in 1864 during the Civil War, Arlington’s rolling hills rise above the Potomac River, just across from the nation’s capital. 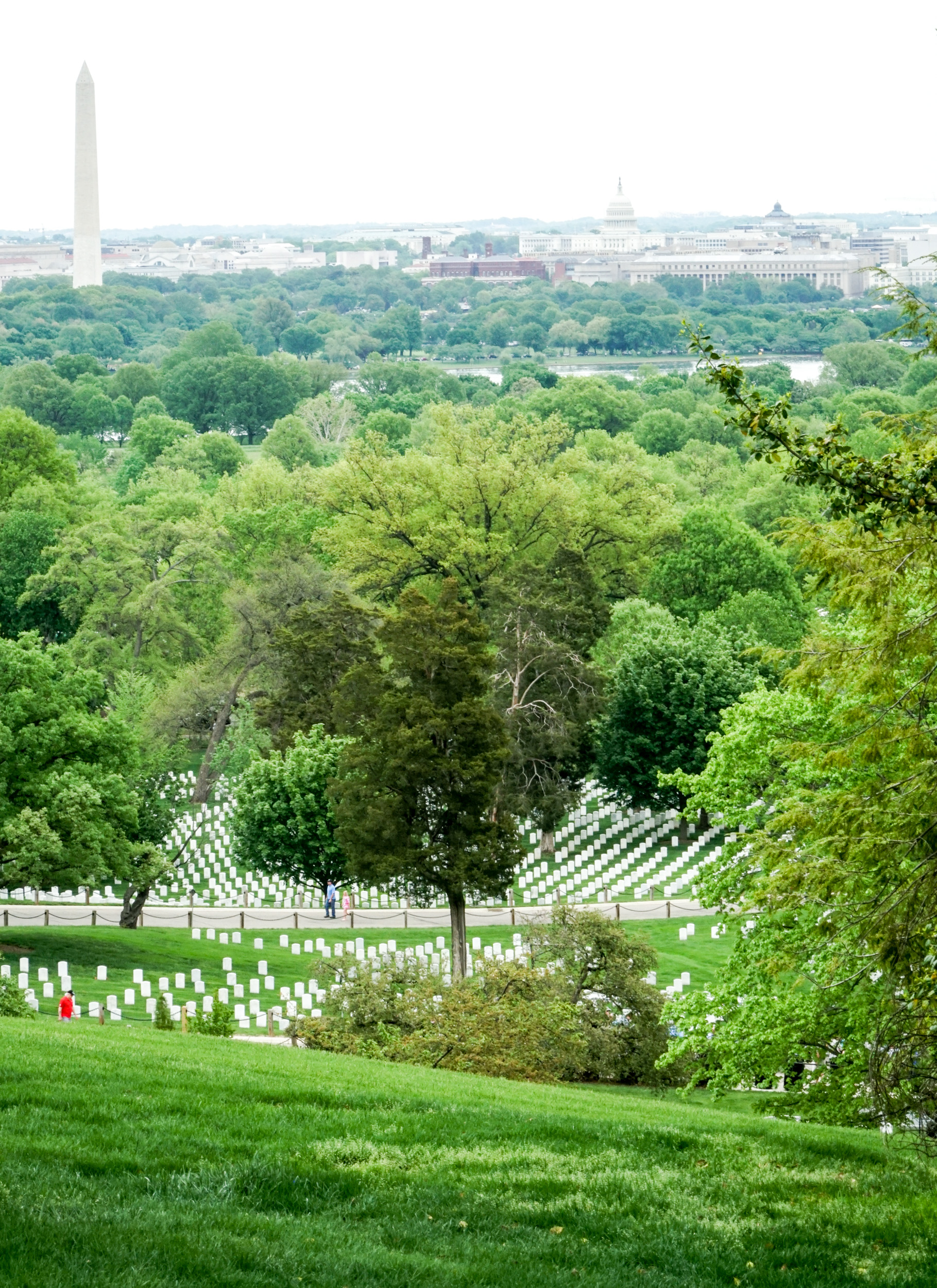 It’s significant that the cemetery opened during the Civil War when the Union took possession of Southern General Robert E. Lee’s home in Arlington. In his absence they buried Union soldiers in the yard. Today, more than 400,000 honored dead are in Arlington.

One of the most-visited grave sites is that of President John F. Kennedy and Jacqueline Kennedy, marked with the eternal flame. Kennedy stood on this hill shortly before his death and remarked that he could stay there forever in such a peaceful place. When he died, his family requested that same spot in Arlington for his final resting place. 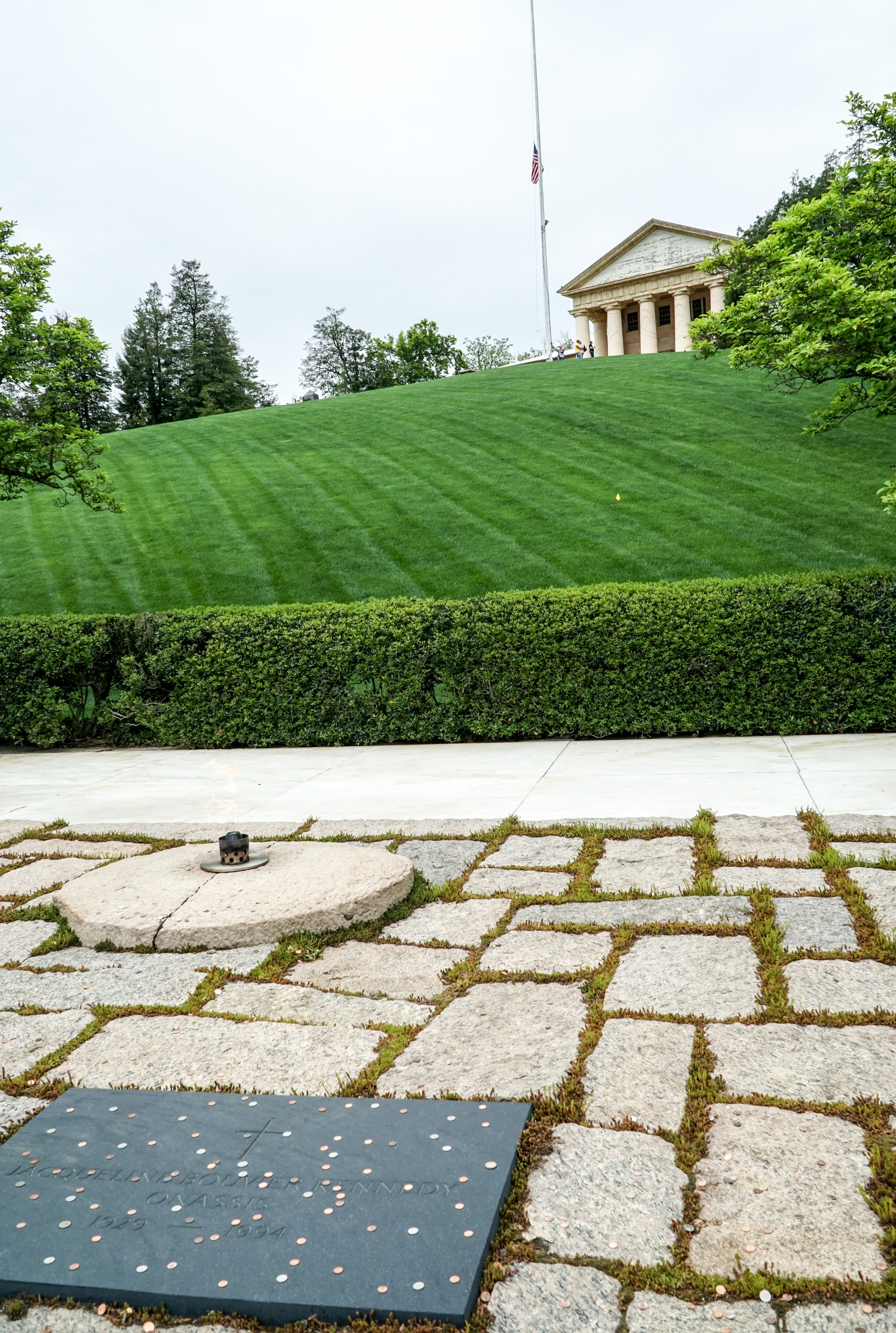 The highlight of our time at Arlington was at the Tomb of the Unknown Soldier. The tomb has been guarded 24 hours a day, 7 days a week without a break since 1930. Military guards consider this such a privilege that they commit to living for this duty for two years. They are required to memorize the locations of more than 300 graves in Arlington and know the history of the military cemetery. The Changing of the Guard takes place every half hour from April to September and once an hour in the remaining months. 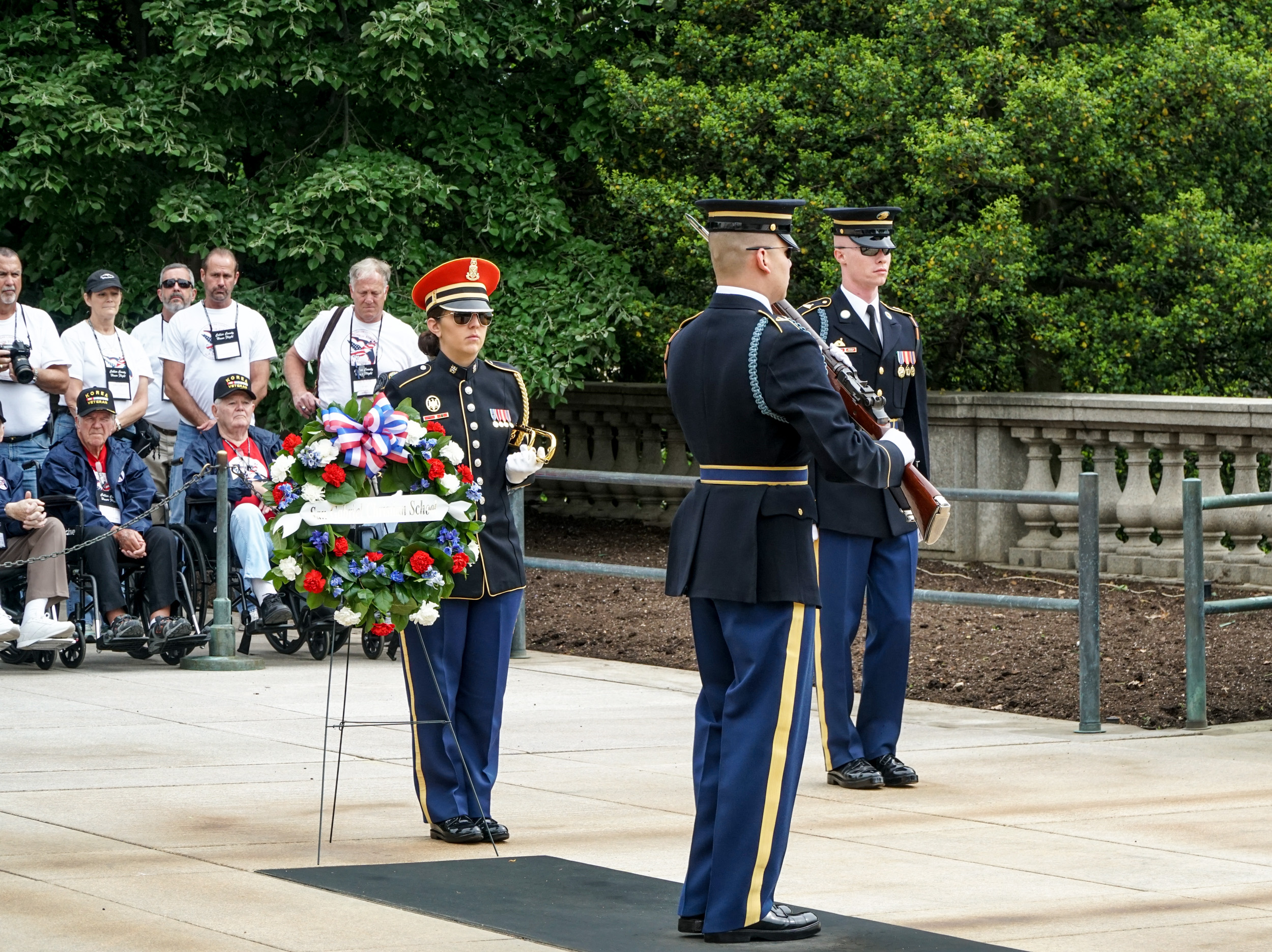 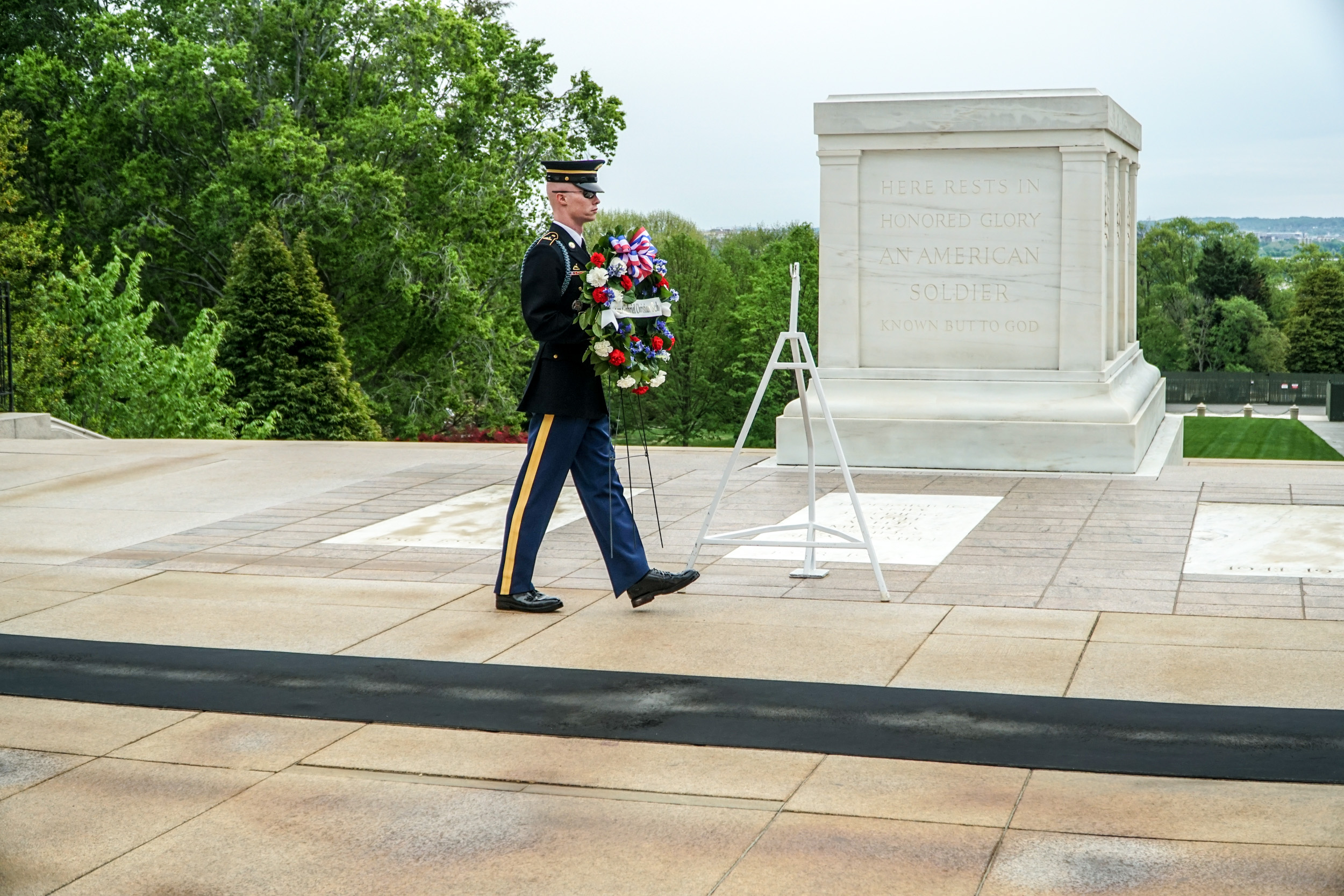 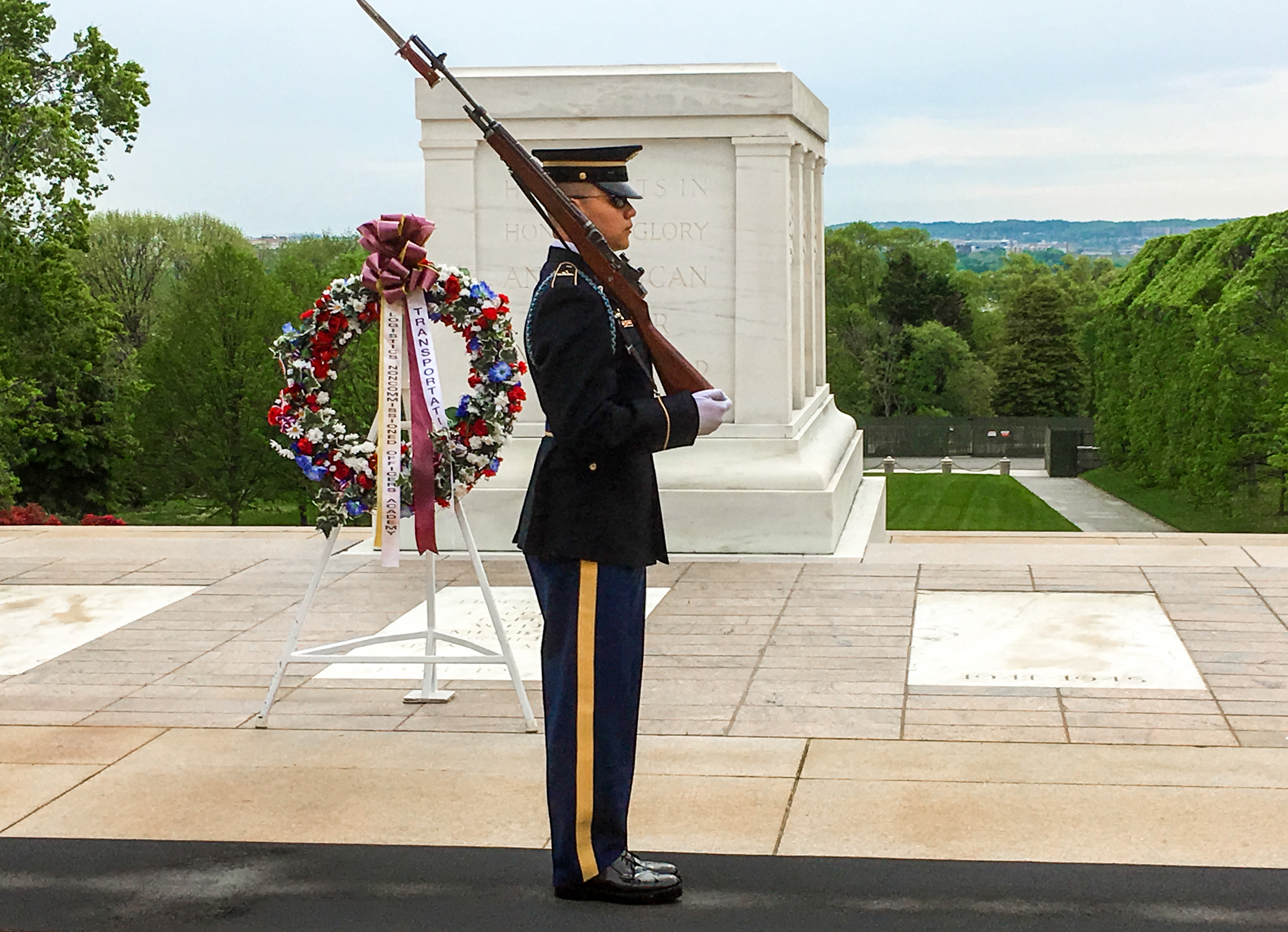 We arrived for the ceremony at the same time as a group of veterans from an Honor Flight. These Honor Flights to Washington, DC are free of charge to veterans, funded by donations. A family member or friend accompanies each veteran.

The veterans are given front row seats to the Changing of the Guard ceremony.

Most moving for me was seeing the interaction between the vets and the groups of school kids. As the vets moved down the pathway, the young people parted on either side of them. Greeting the vets with a respectful, “Thank you for your service,” the younger generation shook hands with the vets. I think this is an experience all ages will remember.

An Honor Flight from San Diego, where we live, attended the ceremony the day we were there. This group of 80 veterans of World War II and the Korean War ranged in age from 81 to 99. We enjoyed talking with this “young man” named Jack. He was so enthused to be there!

We headed to the Confederate section at the back of Arlington because the Civil War is a special interest of mine. Here more than 400 Confederate soldiers were moved and buried again decades after the war ended. In 1914, the monument was dedicated by President Woodrow Wilson. The woman on the monument holds a laurel wreath symbolizing peace. This is meant to be a sign that North and South reconciled. Wilson said at the dedication: “This chapter in the history of the United States is now closed, and I can bid you to turn with me with your faces to the future, quickened by the memories of the past, but with nothing to do with the contests of the past, knowing, as we have shed our blood on opposite sides, we now face and admire one another.” This has sadly proved false, but this section of Arlington still seems to me to be one of hope for the future. 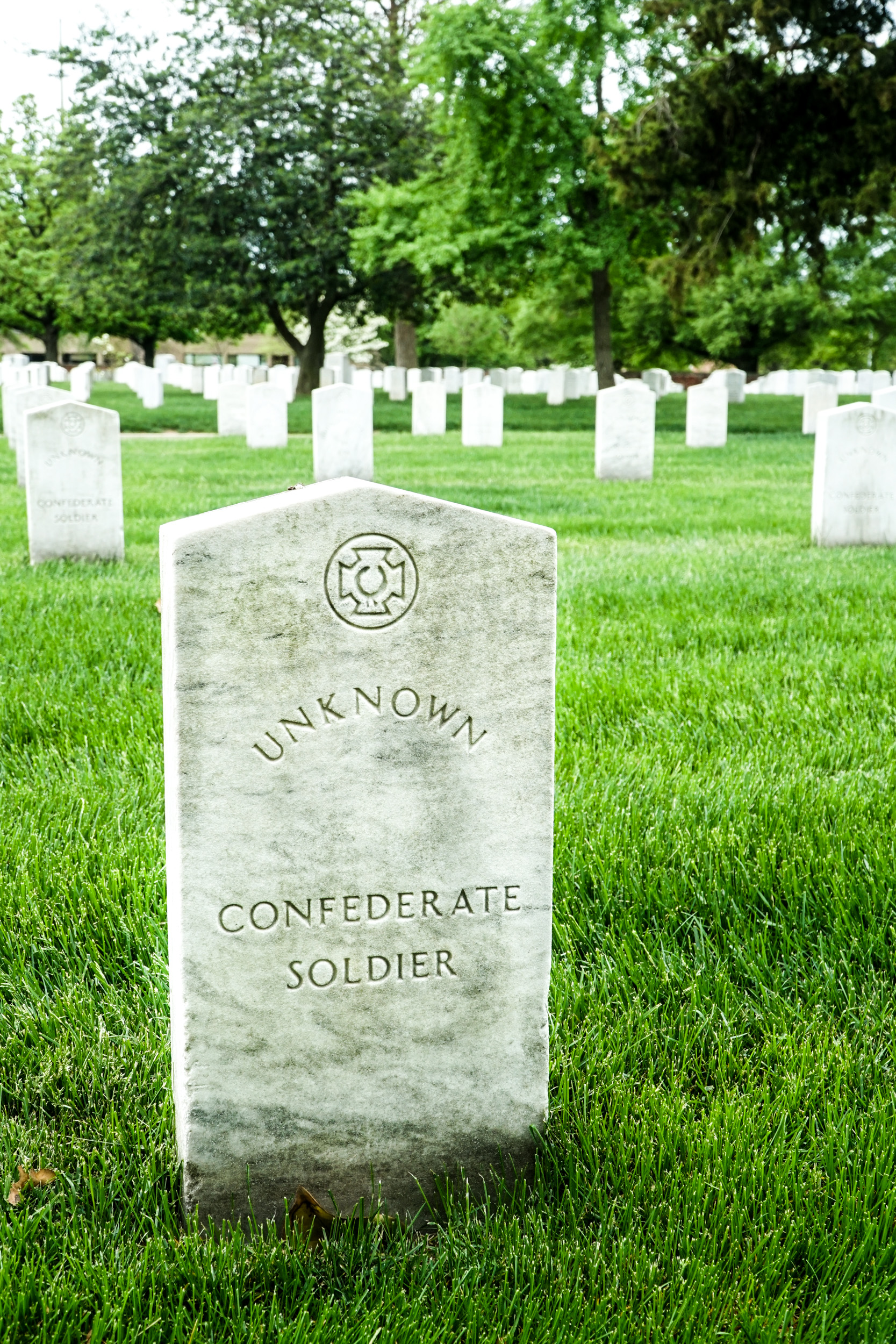 A visit to these hallowed grounds will leave you with much to think about. Life and death and devotion are here. It’s a privilege to walk these paths in the presence of heroes.

Tips for a Visit

Download the ANC Explorer app before your visit. You can locate graves or military areas and use audio guided tours. We wanted to find the memorial for the Battle of the Bulge and were able to locate it easily. 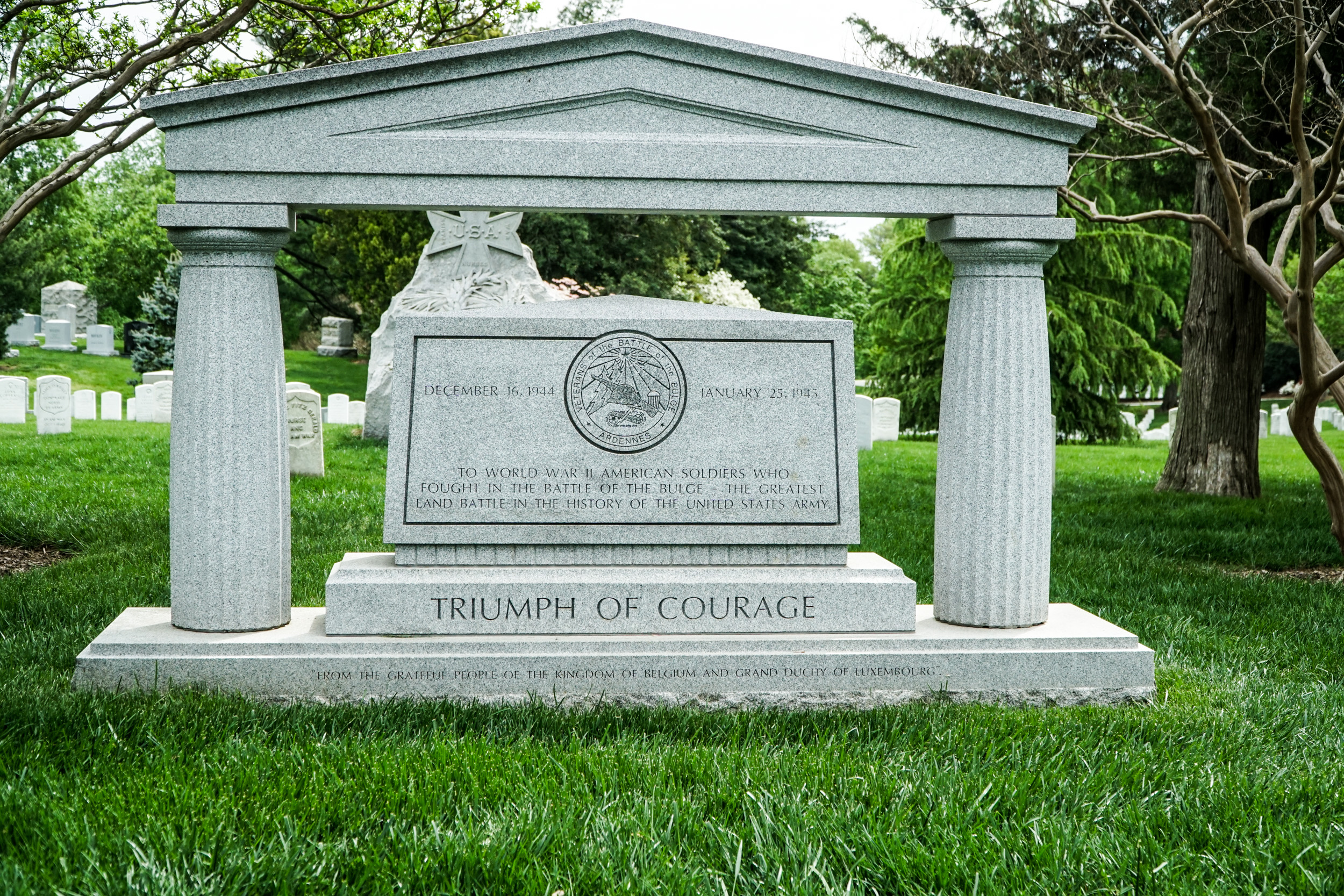 A tour bus is available for a route that takes you to several points throughout the cemetery. It’s $13.50 for adults and $6.75 for children. If you are going to the far corners of the cemetery, this would save a lot of steps.

Do You Love a Parade? 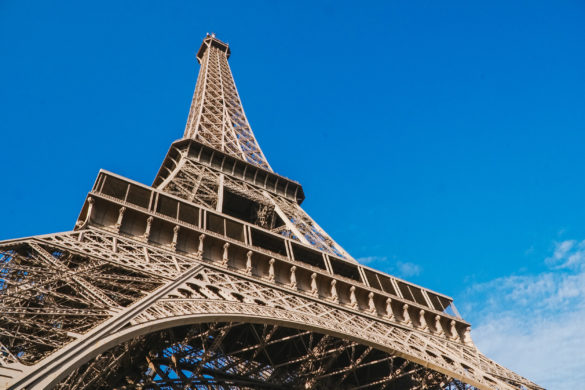 A Few Hours in Paris

I was thinking the same thing as I was reading the inscription on the civil war monument. That the sentiment is far from truth today, maybe even right after the war. I want to think that we are getting closer to that truth. Slow, but steady, even when it seems we go two steps forward, one step back.

Really hauntingly beautiful photos of an important civil monument. Thank you so much for sharing at “Through My Lens”

It is such a beautifully haunting place.

Oh my goodness Sharon. Another brilliant and beautiful post and so appropriate for Memorial Day!

BEautiful photos. I vividly remember seeing the changing of the guard…it’s very emotional to watch.

A perfect post to read on Memorial Day. Thank you for sharing it — and as you say, lots to think about.

Hi Sharon, Great post. I’ve been to Arlington but would go again it’s so impressive. Your article is very well written. I’m going to pin it to my travel board. Thanks and if you have time come visit me at NanaHood.com. Thank you, Teresa

Beautiful surroundings for the fallen, Sharon. Your post is a worthy and moving tribute to these soldiers. Interesting detail about Jack and Jacqueline Kennedy. Sigh, such a sad sight to see all these wheelchairs a vivid reminder of what freedom may cost. Have a wonderful weekend, Blog Friend!

Thank you for reminding us of the purpose of this holiday – a solemn memorial to those who made the ultimate sacrifice.
And thanks for sharing at https://image-in-ing.blogspot.com/2018/05/check-our-catbirds.html

Such sad and moving shots.

What a wonderful place to think and consider things. Your photos are great. I’m glad they bring in special veterans for the ceremonies.

Your photos are stunning! Such a moving post! Nice to hear about the interaction of kids and vets #citytripping

Fantastic photography and subject matter ~ so appropriate for Memorial Day ~

Happy Times to you,
A ShutterBug Explores,
aka (A Creative Harbor)

Good to se so much respect given to the Veterans. The perfect place for such a cemetery.

I have visited many churches & cemetery’s for my blog but the one which I would love to see is Arlington. I think the tradition you have there with the Honour guard is something to be cherished, it’s something we don’t have here in the UK. The Commonwealth War Graves cemetery’s here are well looked after like yours and held in High esteem. Thanks for showing your piece of history

Truly moving and inspiring. Both my father and my husband are veterans, so I appreciate anyone who recognizes their and other veterans service to our country. Thank you for sharing.

I honor all. Wonderful post and such fine pictures. I visited here about 15 years ago and good to see it again.

What a moving ceremony! I hope to visit there someday. Thanks for sharing your wonderful photos with us.

I didn’t know soldiers were buried in Arlington first during the Civil War. You always share such interesting facts with your pictures. I last saw the changing of the guard more than 20 years ago, so it was fun getting to relive the experience through your eyes Sharon!

When I visited Washington DC, I didn’t visit Arlington. I had been to the Normandy American Cemetery and Memorial previously. I am so impressed by the preciseness of the lining of the tombstones. #farawayfiles

Sharon, these are so special and moving. Makes me a bit sentimental because of the many stories I listen before and on Memorial Day. Your pictures take me back to my first trip ever. I traveled from Puerto Rico to D.C. as a high school student. I remember we visited this cemetery and I was astonished since I had never seen anything like it before.

You so beautifully captured the magic and moment in this post. I’ve visited the cemetery just once and could have easily spent far more time there. The changing of the guard was fascinating.

Sharon – a fabulous post. Thank you. I am so gratified that the youngsters gave our veterans the respect they deserve. Very encouraging.

My uncle was lucky enough to be an honor flight recipient and it was truly a highlight of his life. In our area, a local businessman held benefits and donated money to help as money as he can get to DC. What a great post, Sharon!

The last time we went we arrived at the same time as the horses and the team that carries a coffin. They were really nice to talk to and let our young friend with us pet the horses. I actually work in Arlington not far from the cemetery so I do like to visit it when friends come to town- it’s beautiful in all seasons!

The honour flights and the interaction of the vets with the school children are very moving. I visited Arlington National Cemetery at a less popular time so the changing of the guard ceremony was less crowded. I was impressed by the beauty and quiet at the cemetery; a fitting resting spot for those who served the country.

As much as we enjoyed your post on the Washington Mall, this one is our favorite from the DC area. Arlington National Cemetery is such a deeply moving place to visit. It’s another place I think every American should visit, both to see the long and painful history of our wars, and to thank those who gave all. Thanks for sharing, Sharon!

Sharon, this is such a great post. Beautiful photos and a lovely show of respect for those who served. What a coincidence vets from where you’re from arrived the day you were there. I haven’t been to DC yet, but when I do I’ll definitely be putting time aside for Arlington National Cemetery.

Haven´t been to DC, but would love to visit one day! It´s amazing that the military guards know the locations of so many graves and the history of the Arlington cemetery! Would love to watch the changing of the guard! #feetdotravel

A very special, very moving post! Brought tears to the surface! God bless them all!

I’m sure your visit was a moving, educational and emotional one. I love the story of the veterans interacting with the kids..and your overall message of of hope. Thanks for linking up with #farawayfiles

[…] Here are her favourites from last week. 9 Day Ireland Itinerary – Becoming a Traveling Family Exploring Arlington Cemetery – Exploring Our World Where to Eat in Singapore a District Guide – I spy Pretty […]

How beautiful to see plus emotional at the same time when visiting Arlington National Cemetery. A place that is educational and gives hope. I will have to put this on the list of places to visit. Thanks for sharing. #feetdotravel

Lovely post. Did not know about the Honor Flights, wonderful idea. My Grandfather flew bombers in WW2 and is buried in the First National Cemetary in Fort Scott Kansas and we have seen a color guard ceremony there. Much smaller in scale, but still the exact same headstones and amazing symmetry. Moving indeed. Thanks for sharing with #FarawayFiles

What a moving post. There were two parts that hit me the most; the story of JFK’s final resting place, and that of the children showing respect for the vets. Respect is all too often list in this day and age, so to read that was lovely. Thank you for sharing. #feetdotravel