The Library of Congress in Washington, D.C. is the world’s largest library. It is open to the public and is not only a library but also a museum with palace-like décor. Founded in 1800 by order of President John Adams, this collecting place for books of all kinds began with a budget of $5,000. Trouble came in the form of fire during the War of 1812. But Thomas Jefferson stepped in to sell the library part of his private collection to restock the bookshelves. The library now consists of three buildings. The main building dates from 1897. In 1980, it was renamed the Thomas Jefferson building. This is where you will want to head if you’re visiting Washington, D.C. 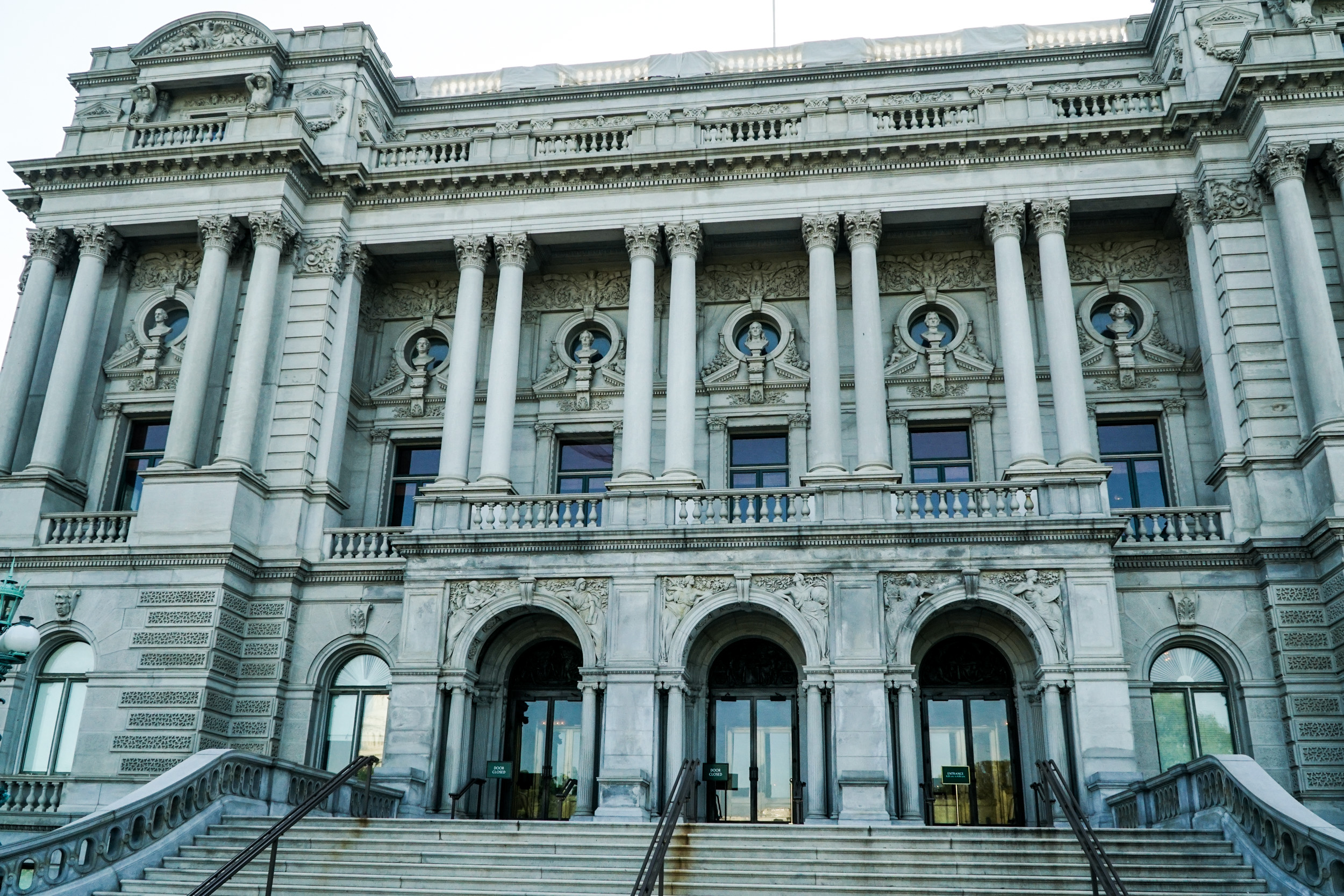 The Decor Is Amazing

At the information desk, pick up a map and list of exhibits and sign up for a tour. Then enjoy the center floor, sculptures, marble staircases, and mosaic ceilings.

Remember to Look Up

Be sure to look up. The ceiling holds many treasures. The Famous Reading Room of the Library of Congress

You may have seen the Reading Room of the Library of Congress in movies such as “National Treasure” or magazine features. It’s truly a magnificent room. The library is working on digitizing all the literature. I was surprised to learn they still have the card catalogs in back rooms, kept for their historical value. 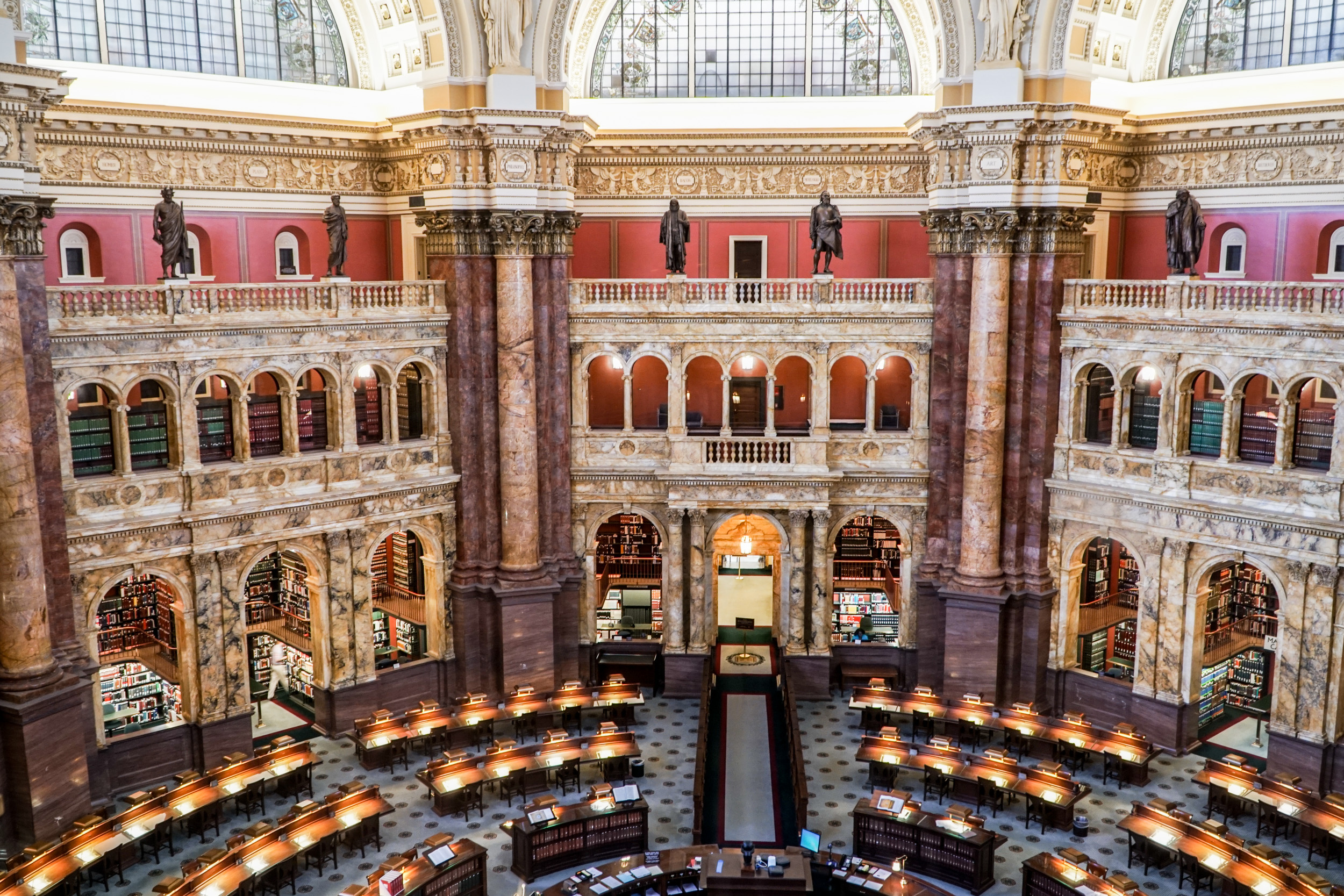 Marvel at the Jefferson Library

The heart of the Jefferson Library of Congress is the collection of books from Jefferson’s library. Many of the books burned. But the library has been working steadily to find genuine replacements for all of those volumes. A simple marking method of a green ribbon bookmark shows which books were owned by Jefferson. Those with a yellow ribbon are found replacements. A few boxes keep the place of volumes still being searched for. To stand in the presence of books actually touched by Jefferson is quite thrilling. Echoes of the Great War

The featured exhibition is a display of books and memorabilia from World War I to commemorate the 100th anniversary of the ending of the Great War. We arrived at opening and spent about 2 hours in the library before our tour. This worked out well. We could move at our own pace, then we joined the tour and our excellent guide filled in background on what we had just seen. We could ask any questions, too. We got a better idea of the vastness of the holdings of the library – not just books but also film, maps, and artifacts. For example, the piano of composer George Gershwin is here!

A surprising bit of information is that as imposing as the building itself is from the outside, it was almost finished before anyone gave thought to the inside. One man was hired to decorate, and the result is amazing. Our tour ended at lunchtime, and our guide gave us an excellent tip. Cross the street to the James Madison Memorial building of the library, which is administration and storage of manuscripts. On the sixth floor is a cafeteria for the government employees. And it’s also open to the public, though it’s not advertised. We had a delicious lunch and sat among the people who work there. We had so much more fun than eating at a touristy, overpriced place.

As our tour guide said several times, the Library of Congress is YOUR library. It’s open to explore. And you can apply for a reader’s card if you’re going to be in town for a while. 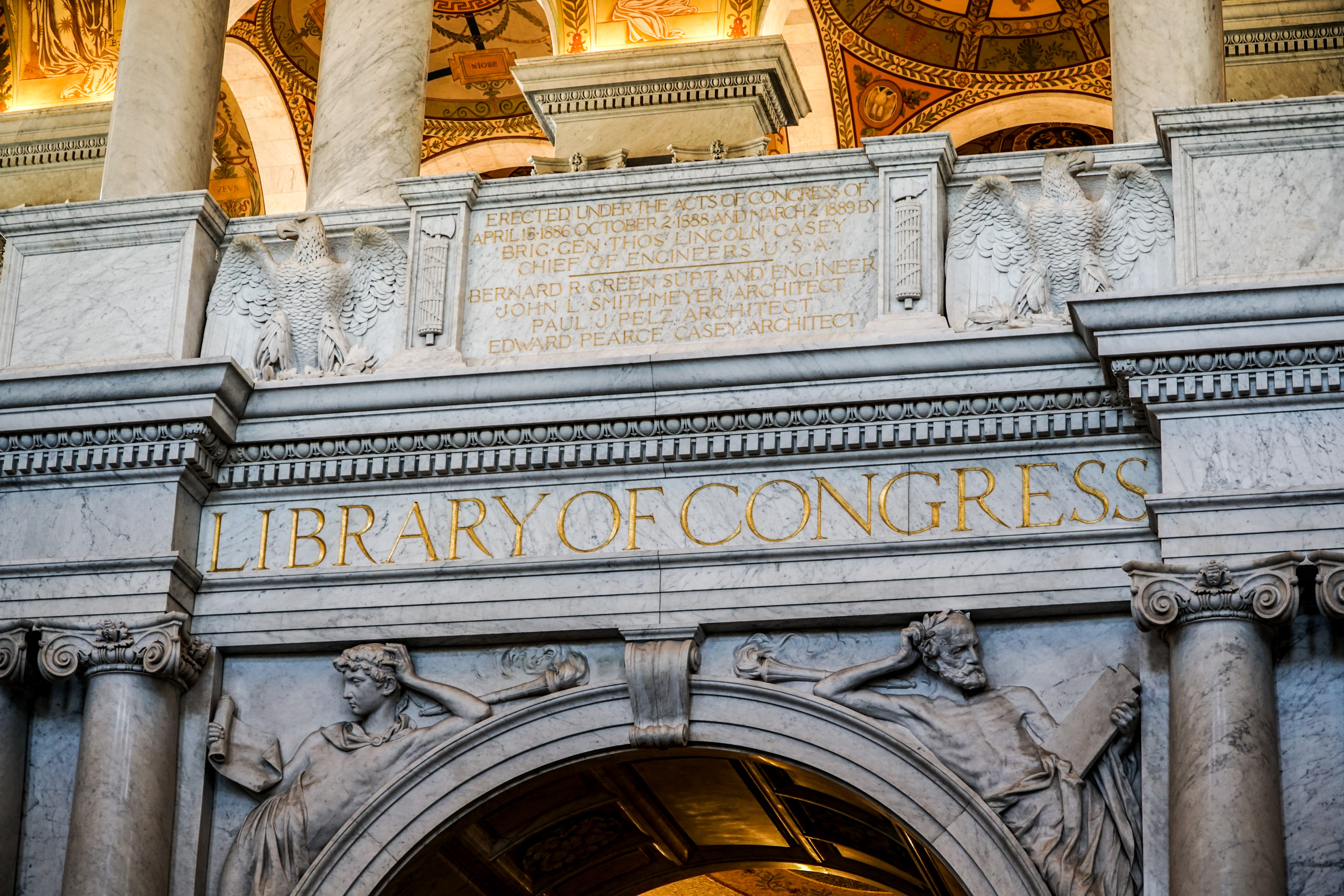 We ended up stopping back at the Library of Congress a few days later, just to see it again. Whether or not you’re a fan of libraries, this is one certainly worth a visit.

The Library of Congress is open Monday through Saturday from 8:30 to 5:00.  For more information, visit the website here. One of the most amazing spaces in DC!

Wow, all the ceilings are amazing and actually more eye-catching than the walls and pillars (except for the arches!) Thank you for showing this an telling what the library so all works on, to All Seasons, Sharon – a real treat! Hope you had a great Mothers Day! Have an enjoyable week!

What a fabulous documentation of this place. One thing is for sure— if I ever get to DC, I will make this the first stop!

A feast for the eyes and soul. Thank you for sharing with “Through My Lens”

Sometimes I forget that we have our very own treasures! Lovely!
http://travelingbugwiththreeboys-kelleyn.blogspot.ae/2018/05/stuttgart.html

Very cool… we are planning a trip to DC this fall and i’m adding this to our list.

Wow. This definitely sounds like my kind of place. I can spend hours in there!

Now that is a place I would love to visit. Thanks for sharing it. Great pics.

Reading your post it hit me like lightening – in all my trips to Washington, I never visited the LIbrary of Congress. That is my mistake it is such a beautiful place. Great post!

Wow. That’s amazing. I’ve visited DC, but never stopped there. I will have to remedy that next time – this place looks breathtaking!
Thanks for sharing at https://image-in-ing.blogspot.com/2018/05/opa.html

Hello, it is a gorgeous building. Love the decor, the ceiling are awesome. Thanks for sharing. Enjoy your day and new week!.

Your photos are terrific. I visited the library a couple of years ago and was staggered at its beauty.

What an incredible place and fantastic photos! Library filled with amazing history!

Wishing you a Happy Week ahead,
A ShutterBug Explores,
aka (A Creative Harbor)

Sharon – a fabulous national treasure that I have not visited, until now! I think my neck would be hurting by the end of the tour, but it would be worth it! Unbelievable that they did not think of the inside decoration – it is by far my favorite aspect of the place. And thanks for the tip on the restaurant – I would far rather go where the locals do!

The Library of Congress is so handsome. Your photos show it off so well. I visited it once several decades ago, and would love to again. When I start feeling a tinge of low self-esteem, I tell myself that I’m in the Library of Congress. It picks me up all the time. lol

What stunning shots of the library!

Incredible architecture. I have never been to DC, what a pity.

It’s just amazing isn’t it! So very beautiful, both architecture and books! Thank you!

Whooa I had no idea it was soooo beautiful!! I loooove libraries and would love to add this to my collection! Love the tip about the restaurant across the street! #CityTripping

Fantastic shots in a beautiful building. I have been there, though not on a tour. I’m particularly impressed with your shot of the library; aren’t there big plastic see through partitions in the way? How did you get such a clean shot?

A true temple to books – what a magnificent building and such an experience to be near books with that weight of history attached. Gorgeous photos as ever. Thanks for linking up with #citytripping

I was there once many years ago. I enjoyed taking the tour with you through your photos!

What a fabulous place! I love all the photos that you took. The architecture is so exquisite!

What a glorious place

It’s indeed like a palace, beautiful interiors. They also hold very interesting exhibitions, when I had visited, it had a exhibit about the Civil rights. Thanks for this post, brought back memories of visiting the place. #farawayfiles

Two by Tour at

What a breathtaking space. We’ve never been! There’s never enough time in DC, so much to do! It’s definitely on our list for next time. We recently were in the New York Public Library, which was awesome, but this is a whole other level. Thanks for sharing on #TheWeeklyPostcard!

The Library of Congress is one of the most spectacular buildings that I have ever seen. My husband and I liked it so much that we obtained a library card for it. We visit it every time we go to Washington DC. #TheWeeklyPostcard

I visited the Library of Congress several years ago and took a tour but did not get the tip of going across the street for lunch at the James Madison Memorial building. The artwork in the building (and the building itself) is incredible. I didn’t know that President John Adams founded the library.

Clare (suitcases and sandcastles) at

Wow, what an amazing library! And that’s a wonderful tip about the café for lunch. Thanks for sharing on #FarawayFiles

I haven’t been to Washington, D.C. yet, but I wouldn’t miss the Library of Congress for sure! Such an impressive architecture! #FeetDoTravel

Oh my gosh, I had no idea how stunning this building was. I would not have thought to seek it out when in DC, but I can see I have been mistaken! What a beautiful structure and so full of history. Thank you for sharing with #FarawayFiles

Wow! As a bookworm, this is my dream! I would just live here. I feel like Belle from Beauty and the Beast looking at the massive structure holding so many books!

Goodness me, what a building! I have read a few posts recently of magnificent libraries, they don’t just hold books but the building itself has a story to tell. I love this! Pinned! #feetdotravel

Wow, the library of congress looks incredible! With that neo-classical design it really looks like it should belong in Europe somewhere. I could easily spend some time there! #TheWeeklyPostcard

Amazing photos and somewhere I really wanted to check out in DC but just never got around to it. I actually love libraries and usually make a point to visit ones around the world. Definitely somewhere on my list for the next USA visit!