The small town of Ypres sits amid peaceful farmlands in Belgium. It is also know as Ieper in Flemish. During WWI, Ypres suffered from its location, always within a few miles from the front as the fighting stagnated. Much of the town was destroyed. Later, in the 1960s, the buildings were reconstructed in the original style. The Cloth Hall, centerpiece of commerce and community, stands tall today.

The architecture will remind you of Amsterdam and Brugge. Intricate, with spires, and tasteful colors. I recently found an archive photo from WWI. What a contrast today!

The entrance to Ypres is the Menin Gate, which is a war memorial to the British troops who died near here in WWI. The names lining the walls are those soldiers who remain lost in the fields. Bodies are still being found when the fields are plowed or construction begins. If a body is identified, the soldier is given a proper burial in a cemetery, and the name is then removed from this wall of the missing. 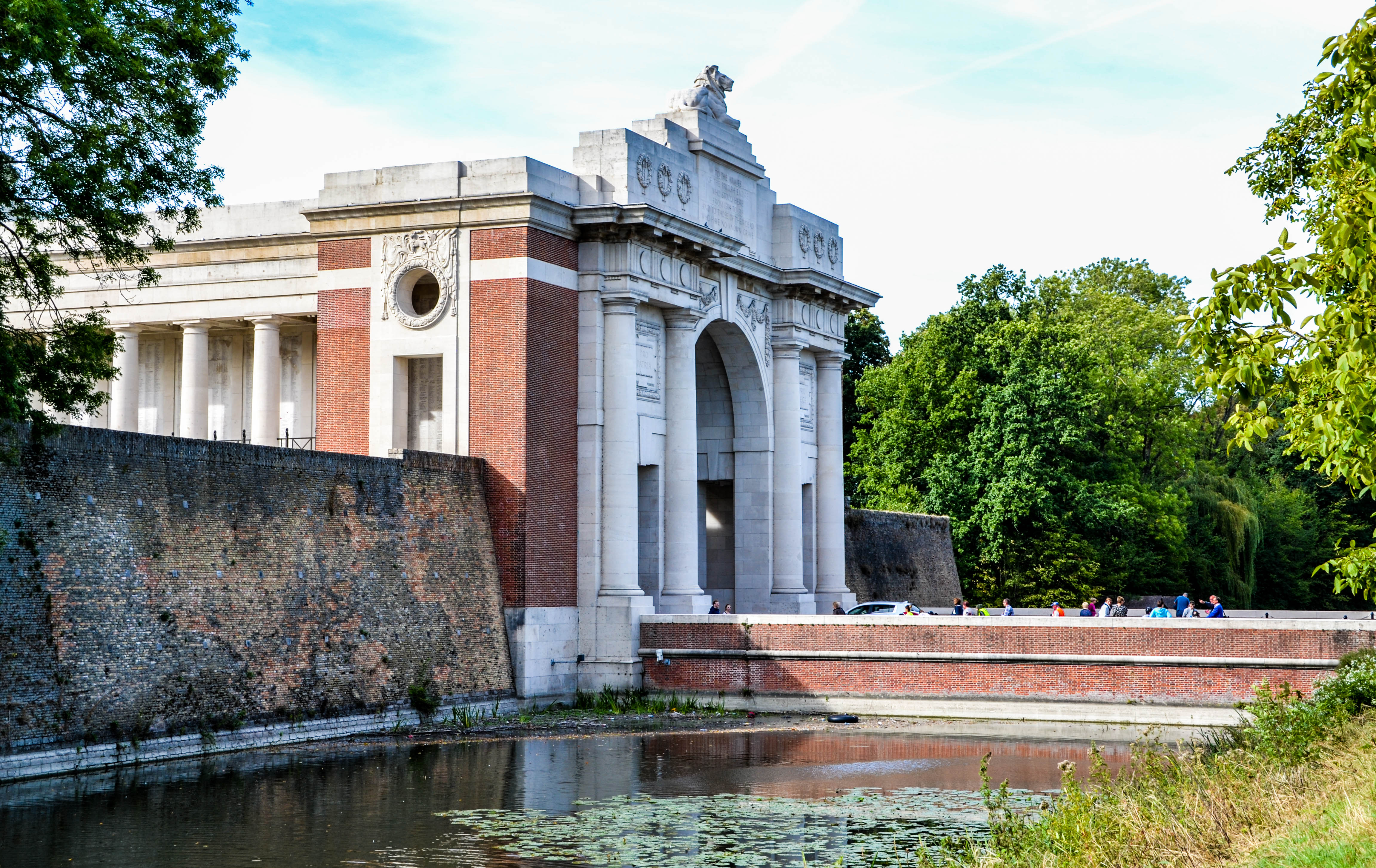 If you visit Ypres, be sure to attend the Last Post. This ceremony takes place every evening at 8:00 p.m. The tradition started in 1928 and has continued every evening except when the Germans occupied Ypres in WWII. Buglers from the Fire Brigade play and families carry flags to honor the dead. We lined up with many others to await the Last Post. The ceremony is short but moving. This large crowd remained in total, respectful silence.

We visited Ypres during a day of touring the battlefields and cemeteries. Dinner at Le Trompet, on the sidewalk outside of Cloth Hall, was a treat. We strolled the main street and stopped for gelato. When I asked the proprietor for a taste of a flavor, he responded, “We do not give out tastes; every flavor is good!” Yes, indeed.

Ypres is an enjoyable and historic place to visit. If you are in the Brussels / Brugge area, consider spending some time here. And try the gelato. It is good!

A peaceful place today. Ypres features heavily in Canadian history, and I’d love to see the place for myself someday, particularly the Menin Gate.

That old architecture is amazing!

That churh is positively massive and so gorgeous. excellent series of images.

The familiar 16-century’s gavels, the Gothic arches, and the lovely restaurant’s patio want me to go right now:):) My son in Holland has an (US) friend who whenever he visits my son, makes a special trip to Belgium for the chocolate! for me, it would be the waffles! You’ll never make a mistake with sharing this for ALL SEASONS – thank you and have a great week Sharon!

All such great examples of amazing architecture. Love the old photos interspersed throughout!

Lovely city! Thanks for sharing! Have a great week!

The architecture fascinates me with all the textures and shapes. What a wonderful place to visit!

What an incredible architecture. How many beautiful details … Great post

I love that they rebuilt much of the city in the traditional style – sadly so many cities that experienced such destruction lost so much of their history and charm in reconstruction.

I LOVE LOVE LOVE Belgium and there are definitely a few towns I still need to get to that are of important, Ypres and Ghent! I love how every night they still honor those who died and are still missing from WWI! That’s very touching! Pinned! #CityTripping

Thank you for this post! I really wanted to make the trip to Ypres, but for various reasons wasn’t able to make it. I really appreciate reading about your visit. #citytripping

You do not hear a lot about this city but it has a lot of charm and beauty. Hard to believe how damaged the buildings were after the war. I am glad the city was reconstructed. Would like to learn more about the nearby battlefields.

Ting at MTM at

I would love to visit Ypres and immerse myself in the history and pay my respects. Such wonderful photos. Thanks for sharing on #CityTripping

Incredible photos (as always!) of some amazing architecture.

Trekking with Becky at

I learned about Ypres in school because of Canada’s role in Ypres during the First World War. Thanks for giving me my first real look at it. 😀

Ypres is forever associated in my mind with that awful battle. So nice to see that the town has been rebuilt and is now pretty and peaceful. I enjoyed this post.
Amalia
xo

It is incredible that the Last Post tradition happens every night back to 1928. Truly remarkable.

Did you visit the In Flanders Fields Museum in Ypres? It’s one of the most effective museums I’ve ever been to. Even my son, who was about 13 when we went there and is generally allergic to museums, was fascinated!

Now more than ever we need to be reminded how tragic this and all wars were but I also like the way Ypres acknowledges cooperation and solidarity across nations to this day. My grandfather was injured near Ypres and my aunt was invited to participate in the Menin Gate ceremony when she visited last year. She found it very moving. Thanks for sharing on #FarawayFiles

So important to remember the senseless destruction of lives and that war inflicts. #citytripping #farawayfiles